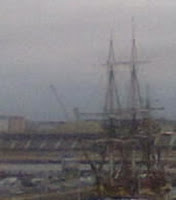 A quickie for the Quatorze Juillet

...bound for Brest (a little after we steamed out of St Malo – which accounts for a less than memorable photo. There are plenty of better ones here.


The Hermione is a 32-gun Concorde class frigate fitted for 12-pounder guns, completed in Rochefort by the Asselin organisation in 2014. She is a reproduction of the 1779 Hermione, which achieved fame by ferrying General Lafayette to the United States in 1780 to allow him to rejoin the American side in the American Revolutionary War.

For the week leading up to the Quatorze Juillet there was a festival of world music at St Malo. On the 8th, one of the offerings was from an Argentine group. I imagine they knew of their link to St Malo, but I'll assume you share the ignorance I had until fairly recently

In September 1763 Louis-Antoine, Comte de Bougainville  (later to distinguish himself in that same war) set sail from St Malo on a voyage of discovery (as many ocean voyages were, at the time). In January 1764 he put in at an unclaimed group of islands, which – like so many explorers before and since – he named in a autocentric way (is that a word? Well it is now.) This is a theme I've visited before. here,)

He called the landing point Port Louis after the French king, and he named the islands after his point de départ: Les Îles Malouines. The islands were those known to Les Rozbifs as .... [but no, I know better than to spoon-feed my readers]. 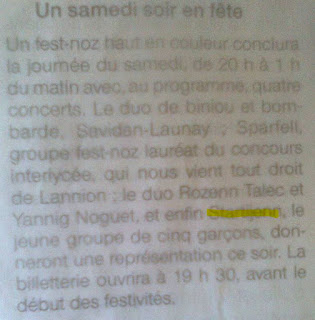 In the newspaper article about the festivities marking the end of the festival I saw the name of one of the groups playing at the Fest Noz that night. They were called Startijenn. This word had meant nothing to me until the night before, when I was reading the chapter on Breton in Lingo (a book that I'm deferring judgement on, as it refers to much that I don't know about but is not totally sound on the few things I do know about).

But an amusing and intriguing feature of the book is that each chapter in this Language Spotter's Guide to Europe concludes with a word that comes from the language covered but has no equivalent in English. For Breton, it is startijenn.

No equivalent, that is, in formal language. But a fairly close gloss is provided by the colloquial kick-start. A startijenn is "a kick of energy, such as you get from a shot of coffee". Gaston Dorren, author of Lingo, calls it "probably derived from English start". I'd say  it's almost certainly cognate, though derived suggests rather more than that. I'll see what the  Romanisches etymologisches Wörterbuch has to say, if anything.


But that'll have to be in an update.

Floor-covering including great, if questionable,  book. (5)

PPPS One possible (if linguistically naïve) objection to the derivation suggested in my PPS is that it makes startijenn a mongrel – derived from two sources (a supposed aberration, according to some observers).  But, as I wrote here, it is ridiculous for any language to lay a claim to a word  for all time – it's  a question of where you choose to stop the etymological clock [a metaphor I introduced here].

Television is my stock example of a word derived from two sources – a Greek prefix and a Latinate stem. A purely Greek version would be teleopsy; a purely Latin version would be ultra-vision. Another less obvious example (discussed here) is morganatic, a happy mixture of Germanic and Latin, which is more relevant as it mixes a Germanic stem with a classical affix (as startijenn does, if my guess is right).

And here are a couple more clues:

P4S Another mongrel that had always confused me until my recent visit to Bretagne is polyvalente – usually seen in the phrase Salle polyvalente; come to think of it, quite possibly some chemicals are polyvalent in English (yup). That word has a Greek prefix and a Latinate stem. In English a hall that can be put to various uses could be described as all-purpose, though in practice I've seldom met it in that context (except in special cases like "all-purpose sports hall"); we usually just say something more homely, such as village hall – although I'm probably betraying my South-Eastern commuter-belt background there. It goes without saying that such a hall is suited (or valid) for a range of purposes

This demonstrates the point first brought to my attention by M. Baring-Gould, that French tends to prefer hi-falutin (though he probably used a more diplomatic term) vocabulary.


<autobiographical_note>
The example he gave to class 2Ba...

...was carié. English does have the word carious, but the register is different. Dental professionals use it, but not the patient-in-the-chair.
</autobiographical_note>

So the words salle polyvalente, common on hitherto baffling signposts everywhere I've been in France, mean (presumably  – I haven't checked, it just seems obvious to me [NOW]) is just an all-purpose hall.

P6S The answers: HERMIONE, PARTICIPANT, MANIFESTO
And here are some clearer photos from AFP.
Posted by @BobKLite at 14:18