There is, at the end of Bene't Street, in the vestibule of what was in my day a bank, an award-winning piece of' 'public art': "invented and designed by Dr John Taylor for Corpus Christi College Cambridge for the exterior of the college's new library building"  as it says here. And to call it just 'art' is akin to calling the Mathematical Bridge – about 200 yards away as the crow flies (nearer a quarter of a mile as the undergraduate squeaks on a borrowed bike on the way to the Sidgwick Site)  – just 'civil engineering'. Time clicks through the chronophage's mandibles, unendingly – as is its wont (time's that is) – and recycles† itself.

My thoughts turned to this when I was caught up in the twitterstorm (twyphoon? ... twornado? ... twaboob? ... Got it – TWISTER [see what I did there?]) that followed this request:

My initial response (duly retweeted, – as were many of the other responses, many of which were blessed with the British Council's impwimatur) was:

On reflection, I reinterpreted the question (which I had read as 'is it known by all schoolchildren?'), and posted this afterthought:

Hobson-Jobson was a late nineteenth-century collection of Anglo-Indian words. As one of the earlier compilers wrote in the Preface: 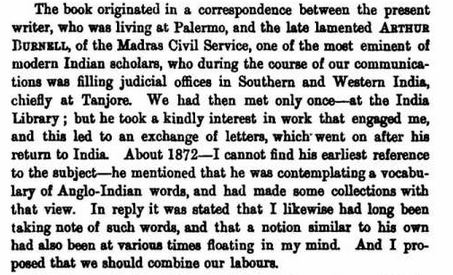 But this was only the beginning. One of the less-shrill contributions (which I admit to taking personally – but fortunately I was on my way to bed at the time), was:

The following morning, girding up my etymological loins, I did a bit of research – which is where the chronophage comes in. Where does one stop the clock?...


Enough for today. I must go and give some thought to a song inspired by David Crystal's IATEFL keynote on 'blends' (or as he said, to give it the $10 word, anacoluthon). It is based on the song sung, but not written, by the Beatles – Anna; the lead-singer sings 'Ana-' and the backing singers join in, to move the tune to the relative minor, '-coluthon'. That's as far as it goes so far. Annoyingly Anna doesn't include any blends.

b (who will finish the story in the next post).

Update: 2013.04.13  I am working on an update, but my experience with Blogger and images doesn't inspire confidence. So it will appear, probably tomorrow, as a separate post. I'm not renaming this as 'Pt 1' (although it is) in case someone has it bookmarked.