A metter for further discussion, don'cher'now

Geddit? Metaphor. Oh well... This post is a spinoff from my last piece, about food metaphors – specifically, the update about alcohol. In it, I admitted to a problem with the derivation of 'Madeira' from the word for wood –  it was the wrong kind of 'wood':

All the authorities I've looked at confirm this, but I can't say I'm entirely satisfied. Madeira is the substance rather than the silvan entity.

It's a happy(-ish, if that sort of thing floats your boat) coincidence that the part of Madeira awarded World Heritage status by UNESCO in 1999 echoes the penultimate word in that periphrasis, the  laurisilva. or laurel forest:


<potential_rant theme="laurel" suspected_agent="glyphosate" advice="Don't go there">
(which reminds me of Li'l Miss Lebensraum next door and The Curious Incident of the Laurel in the Night-time...)
</potential_rant>

...But I am breathing deeply, and will carry on as normal.


Madeira is (or was, and  bits of it still are) densely wooded. But you don't call St Vincent 'Arrowroot'.

<autobiographical note>
This bit of useless knowledge comes from a calypso I was exposed to※ at my primary school, about West Indian exports. The relevant lines were:

St Vincent is cute
For sea-islan' cotton
And arrowroot

I don't  know what arrowroot is exactly, but I know it was one of St Vincent's two major export crops back in the day.

So anyway, what happened?

Portugal 'discovered' the island in the early 15th century, though –  like many discoveries of a geopolitical nature –  someone else got there first.

Latin had various words for wood; one was  lignum (particularly firewood  –  my old title-page-less nineteenth-century dictionary says it was '[Prob. from lig-o  "to tie"]' which makes sense –  but it was very flexible; Juvenal used it metonymically to mean a writing tablet*. That dictionary also cites Horace's version of 'carrying coals to Newcastle': 'in silvam ligna ferre'  (spookily prescient of him when you think of 'lignite' and the Spanish for railway (ferrocarril) ...OK, not really). Wood as building matter was materia or materies. I think I've already mentioned (somewhere in this blog) Vulgar Latin's preference for first and second declensions over the less regular third, fourth, and fifth; less to remember – and we are often dealing with Latin for speakers of  a Second or Other Language (LSOL?)

Lignum is the root of the Spanish leño, and† [not that simple...] materia is the root of the Portuguese madeira (no prizes, by now, for recognizing metathesis here – the r and the i [swapping places]. This commonplace in language development is the subject of one of my more popular backnumbers.)

A Castilian monk (again not the first, but possibly – except for an alleged visit by the Vikings – the first in the post-Roman world) 'discovered' the island too:


a Castilian monk also identified the location of the islands in their present location, with the names Leiname (modern Italian legname, cognate of Portuguese madeira, "wood"), Diserta and Puerto Santo.

So says Wikipedia, and I don't have time to trace it back to a sounder source.

Then along came the Portuguese and spat in their beer (as it were), changing 'Leiname' to their own Madeira (even though I'm not  at all sure that 'Leiname' was a Hispanized word at all; maybe it was the name applied by the islanders to the land of their fathers, with no reference to wood. But this is entirely speculative. All I have found  so far is that there is no reference to Leiname in the Romanisches etymologisches Wörterbuch‡, the fount of all wisdom for Vulgar Latin. My next port of call, but not today, is an historical dictionary of Spanish.

Anyway, the  Portuguese version stuck. The marvellous  Romanisches etymologisches Wörterbuch is in no doubt about the meaning: Holz 'wood' –  and you can't get much clearer than a monosyllable. 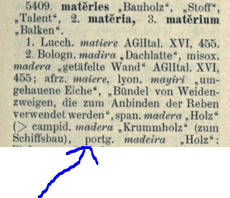 Must go. Other fish to fry (and there goes another culinary metaphor).


Tales from the word face

Things have been a bit quiet (well, absolutely quiet) of late on this front. I have had a paid job (remember them?) since late Summer, and the bits of work I've done on When Vowels Get Together have involved casting bread on the waters (by which I don't mean feeding the ducks)

My latest wheeze has been a letter to the Open University's alumni magazine:

I have studied for two post-graduate diplomas. The first was in Computing for Commerce and Industry, and during it I was sponsored by my employer, Compaq when the course started (1999) and HP when it finished (2003). My aim was to extend my usefulness as an employee in the world of IT. Unfortunately, this did not work as I was laid off in 2004.

So I retrained as a teacher (a PGCE from a bricks and mortar university). But, meaning to specialize in ESOL/EFL, I returned to the OU to study for an MEd in Applied Linguistics. I found, though, after happily taking 2 or 3 courses (I forget the precise details) that to finalize the MEd I would have to take a course that was useless to me; as I was now self-financing, and otherwise unemployed, I had to bail out, taking the interim Advanced Diploma as a consolation prize.

Now, to fill the gap left by OU studies, I started writing a Dictionary of Vowels and their Sounds - which I entered for the ELTons 2012. The planned book (with a number of specimen chapters) was shortlisted but did not win. (My '15 minutes of fame' are at 19'17"- 19'30" of that video, or those with less time can scroll down to the foot of that page. You'll note that, with typical over-statement, Marshall McLuhan was out by about 14'47".)

Rather than just forget the specimen chapters (which covered words containing all the vowel-pairs containing a U), I rethought my aims and started work on a new book - When Vowels Get Together. When I had done AA-AU, I sent it to my son for comments, and for ease of process I made it available on Kindle - I told only him though.

To my surprise he announced it on Twitter, and in the first 5 days it had been downloaded more than 200 times. At this stage I felt I had to continue; and, with the intention of getting people interested in the progress of the then very partial book, I started a blog: Harmless Drudgery (I'm sure many of your readers will recognize the reference to Dr Johnson's definition of a lexicographer). It has now been downloaded well over 1,000 times; and while this does not mean it has that many readers, or anything like it  - as there have been repeat downloads by people tracking the book's progress - it's still a milestone that I find quite satisfying.

In the mid-late-noughties, between my two OU courses, I had been to an OU seminar on digital technology, run by Simon <somebody> (not 'Buckminster-Fuller', but something like that) and made a number of new contacts, all of whom used Twitter, and most of whom worked for the OU - either as ALs or in a permanent position.

Returning to my book, by September 2013 I had reached the vowel pair 'OU'; this was the culmination of V4 of the book (A diphthongs - V1, E -V2...). And to announce its near-readiness I devoted a blogpost to an excerpt from the 'OU' section, using the title 'OU, you are awful'. The pun (it was a Dick Emery catchphrase) was not entirely gratuitous. 'OU' is by far the most common vowel-pair used in the source dictionary I had used (both as a source of data [for each pair the book lists all the English words listed by that dictionary, with a few others where Macmillan had made what seemed to me a glaring omission]; and as a reference [each word listed is linked to the online Dictionary]). To quote my book:

However, I was deluged  with tweets [HD: A bit of an exaggeration, but I did get one.] from people who - seeing my title - assumed I was bad-mouthing the OU. But I wasn't, as this shows!

I am grateful to the OU for indirectly leading me into the world of self-publishing.

PS I attach a flyer about the book in case you would think it appropriate to work this rather overlong letter into an article.

Update 2014.11.06.09:15 – added note:
† This is not to say that this is the only word. Among the options, Spanish has madera and Portuguese has lenho. By changing the name, Portugal was not saying 'A feeg for your feelthy leño. We are calling it Madeira, to remove all trace of your influence.' They were simply asserting their right to change the name, or perhaps covering their tracks – 'This isn't what others have known as Leiname, it's Madeira',  changing the name so as to stake their claim – in the way of all colonizing powers.


Update 2014.11.09.15:20– added note
‡ I spoke too soon. Well, I don't believe there is reference to the word leiname in that dictionary, but there is the next best thing – reference to the Italian legname and to the Spanish leñame.  Here's the article:

Vorrat von Brennholz auf Schiffen it says: 'Supply of firewood on ships'; which suggests that the island was known as a place where ships could put in to stock up on firewood.  That makes sense: the island was named after its usefulness as a source of wood for a particular purpose. It seems to me that the substitution of the name Madeira by the colonizing  Portuguese deprived the name of some of its usefulness. But as 'Ayers Rock', 'Rhodesia', 'Lake Victoria', and thousands (if not millions) of other colonial place-names show, usefulness is not a notable concern of colonial  powers.

Update 2015.12.06.22:45 – added note:
*Another metonymical use, a bit closer to home, is the (Italian) score-marking that tells a string player to produce a percussive effect with the back of the bow: col legno.

※ This seemingly arch circumlocution isn't just a rather clunky bit of elegant variation. I wasn't exactly at the school at the time. My older brother and sister were taught the song and brought it home.