The story so far: The British Council invited contributions from etymologists. I answered, giving an Indian etymology, and was gainsaid by a report of Arabic/Islamic etymology. As the origin was given in a tweet addressed to me (among many others), I took it as a claim that I was simply wrong; tweeters with Islamic backgrounds said 'Hands off ‐ it's ours' (in a way strangely reminiscent of much post-colonial rhetoric

). You left your hero in a frenzy of self-doubt. Now read on.

Henry Yule, co-compiler of Hobson-Jobson , wrote in his Introductory Remarks (not content with a mere Preface)

The crucial (or perhaps critical) word there is 'origin'. Mufti's origin is not Indian. The mufti is that Arabic scholar.

Hobson-Jobson itself, after giving the Arabic origin, gives this alternative meaning:


b A slang phṛase in the army, for 'plain clothes.' No doubt it is taken in some way from a  [the Arabic original], but the transition is a little obscure. [It was perhaps originally applied to the attire of dressing-gown, smoking-cap, and slippers, which was like the Oriental dress of the Muftī who was familiar in Europe from his appearance in Moliere's Bourgeois Gentilhomme. Compare the French en Pekin (HD: My emphasis).]

So  India was the beginning of the word's journey (I almost wrote trek, but the origin of that is Afrikaans, which might further muddy the waters) into English. The Etymological Dictionary adds


Sense of "ordinary clothes (not in uniform)" is from 1816, of unknown origin, perhaps from mufti's costume of robes and slippers in stage plays, which was felt to resemble plain clothes

That last speculation seems to me quite likely – with the 'in' meaning 'dressed like a ...'. Somewhere in the Raj in the early nineteenth century, one may imagine, someone had seen an amateur production of Le Bourgeois Gentilhomme (the West's introduction to this sort of Islamic scholar/judge) dressed in a dressing gown and whatever else came to hand in an amateur wardrobe, and used 'in mufty' (sic) to refer to an officer's off-duty attire. The reinstatement of the i was presumably a later bit of scholarly meddling (like, in its way, the 'reinstatement' of the silent b into 'debt', when Chaucer was quite happy using the French borrowing dette   {thinks} When Dr Johnson defined a lexicographer as 'a harmless drudge' I think he knew what he was doing. Lexicographers can make life much more difficult for students. They say 'Look, what a boon is standardization'; but look at the mess they make!

The movements of the people connected with the British army, particularly during and after the Empire, explains the dissemination (or to give it its Greek-based near-synonym, diaspora – think 'semen' and 'spore') of many words. My oldest brother did National Service, but I didn't. When everyone spends their life in mufti, what's the point of distinguishing it with a name ... unless...

Some time after my schooling, the idea of raising money for charity by allowing wearers of school uniform to wear their own clothes became common. The teachers who arranged the first of these (in the seventies, at a guess) had experience in the armed services (or had parents who had, and had grown up surrounded by the jargon of the armed forces)*; so they knew just the word for 'out of uniform' – thus 'mufti days' were born. But, as I said in my original tweet, my children knew what they were, but it was grownup-speak; they both said something like 'Own Clothes Day'. This tweet sums it up:

The word mufti had had a long and chequered life. Originally there is no doubt that it referred to an Islamic scholar/judge. But the events that led to its adoption into English happened in India. The question is, as time clicks inexorably through the chronophage's mandibles, where do you stop the clock†? If you do, whenever you do, you risk being '[a] bit old fash'.

Report  from the word front
V2 is ready to go, except for an intractable bug in the .mobi file, which makes it open half-way through the table of contents. This is no big deal, as a Go To command makes the problem go away; but ideally I'd like to fix it. But Le mieux est l'ennemi du bien, as someone said; so I'll ignore it and stay on schedule.

*I remember a confusing case that exemplifies this, which involves me on holiday at Fishwick (just down the coast from Bognor Regis), going out for a sailing trip with a friend of the family, a retired naval man. He kept his dinghy well up on  the shingle, and used roller bags to get it down to the sea. The actual pushing was done by adults and adolescents, but a 7- or 8-year-old could look after the roller bags – taking the rearmost one as it became free, carrying it round and slipping it under the prow before the boat ploughed into the shingle. He said to me 'You be OC bags' [='Officer Commanding'],  which I heard as 'UBOC bags', whatever that meant. There was an embarrassing pause, during which he no doubt wrote me off as the worst of landlubbers.

PS on the subject of army slang (well, wartime slang):

Recycling waste paper is not as trendy a thing as some of the greenwash we get from politicians might lead one to think. In my childhood, in the 1950s we distinguished between household waste (which went in the bin)  and clean waste paper (which went in 'The Salvage Box'). We had no idea, nor any need to know, what salvage meant; the linguistic 'clock' just happened to stop in WWII, when salvage mattered. 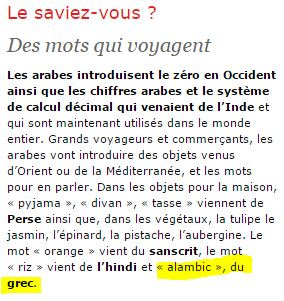 Really? I thought. Surely, with that 'al-' prefix, it must be from Arabic. [I talked about this prefix here  – at least, I thought I did. Briefly, the Moors who invaded Spain in the year 711 {and stayed there, in varying territories, for nearly 800 years} had Arabic as a second language and prepended the definite article to their nouns: that's why many Arabic borrowings in Spanish and Portuguese have an a[l]PPS- tacked on at the beginning – sugar, for example, azucar/açúcar in Sp/Pg is zucchero in Italian, as the Arabs who invaded Sicily  had Arabic as their mother tongue.

Luckily, before rushing to press with a report of this suspected howler, I checked in Etymonline. 'Alembic' did come to English by way of Old Spanish, as I suspected, but άμβιξ was Greek. So again, it all depends on when you stop the etymological 'clock'.

PPS – Sometimes the "al-" prefix is obvious in the borrowed word, as in "alembic", "algebra", and so on. But sometimes the swings and arrows of etymological  adversity leave only the trace of this once proud definite article. For example, Etymonline shows how oud and lute are related:

(tracing of a supposed PIE  link between that ‘ud and the English wood is left as an exercise for the reader).