... a gag that isn't original, but first saw the light nearly 50 years ago; and the one person who heard it  is sadly not around to complain about the repetition (not that she would have); RIP.

Operating system-wise, everything is fine. I am now a three-o/s user: Windows 7 on the PC, and two laptops – one Android and one Linux. In the fullness of time I shall be an Open Systems person.

But power-tool-wise things are neither hunky nor dory; and the villain of the piece is Wolf. I have been sold a pig in a poke.


<digression>
I should  have known; wolves and pigs are famous for their incompatibility.

But I'm the one who's doing the huffing and puffing.

The first warning was the one online review (among dozens of glowing ones) that warned about the power planer's cutter – for that is the power tool at issue – being skew-whiff (as was the replacement the maker sent).

But I ordered it anyway. Which is when the Ah-me surplus began mounting up. First of all, it had no User Guide enclosed. So I used my default medium:

To give Wolf their due, they responded promptly. I now have a PDF of what they call a manual and expect hardcopy in the post.

<rant>
As a reformed Technical Writer (well, retired actually –  although there‘s plenty of work out there, if only the makers of DIY stuff would WAKE UP) ...

<meta_rant>
and that's another thing: when you start a sentence 'As a ...' make the subject match up FFS.  A lot of hot air is wasted on the iniquity of the dangling participle. I try to avoid them, but they're often not crucial to a misreading. If someone says 'Walking across the playground the chemistry lab came into his view', that's a bit of a shame; but nobody in their right mind is going to envisage an ambulatory chemistry lab. But this 'As a...' issue matters. I just received mail from KDP about the New Deal VAT regulations. Naively, I thought it might clarify my tax liabilities. [Hollow laugh.]

As a publisher with Kindle Direct Publishing, the European Union (EU) tax laws have changed regarding the taxation of digital products (including eBooks).

I wanted to know if I or Amazon was the publisher of  my stuff in the eyes of the EU. But could I hope for enlightenment from this  belated [it arrived the day after  the changes came into effect]  advisory? Could I bu@@ery?!

Do they not pay people to write this stuff?

...I am pained by standards of technical writing. My experience was mostly in the field of software, and mostly for System Managers rather than end users  – real-life punters, that is – but many of the issues are the same.


Lists, for example:
There are exceptions of course. But this ‘Guide‘ (which should really be in Braille, for all the light it casts) breaks every guideline in the book. The items in some of its lists  – numbered or bulleted on what seems to be an entirely random basis – run well into double figures.

But regardless of its structure, its language is indescribable. Here are just three examples:


When  you are setting, installing or [sic, no comma] or putting the electrical tool down, make sure that you never touch the planing tool.

As it happens, after much thought, I have worked out what this means: 'the planing tool' at the end of the sentence is a component of 'the electrical tool'. But before I recognized the polysemy of 'tool' (its having more than one referent) I was potentially immobilized by the instruction to adjust the thing without touching it. It was like a parlour trick: 'Can you get the <thing-one>  into the <thing-two> without <apparently-necessary-action>?'


Check the machine, loose part [sic] and accessories for damage incurred during transportation.

And 'damage incurred' is a pretty ... challenging? collocation. This BNC search shows no instance of incur among the collocates. Of course, BNC is pretty small. I tried to expand the search to the less authoritative but almost infinitely bigger Google, but the search for 'incur damage' (tout sec [=Fr for 'just that', roughly]) automagically picks up the perfectly acceptable 'incur damages'.


Use the extraction equipment for sucking out the wood shavings! [sic: {obviously quite important}]

What this means is anyone's guess.

b
†This oddly specific number is no accident – see Miller (1956) as an academic might say. The rest of us can pick the bones out of Simple Psychology's explanation of short-term memory.

PS My 'image of the year so far' – only 7 days in, I know, but still – is Kipling's 'grinning like a coal-scuttle', which I heard this morning in BBC Radio 4's Just So Science (which I heard with much more appreciation than on my first reading [in short trousers...


<autobiographical_note>
and I can be sure about the trousers, Best Beloved, because I first read the Just So Stories when I was in the Cubs – for whom Akela, Bagheera, Baloo, Kaa et al (all with /ɑ:/ in the first syllable, IF you please, Walt) had special significance. 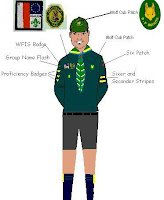 In fact, elements of the uniform referred to the Just So Stories; for example, the cap could be adorned with one or two stars, depending on satisfactory performance of various skills ...


<digression>
One of  those skills was Run with a message. I imagine the person who dreamed it up was thinking of  carrying messages on a battlefield. But the interpretation my Pack  used didn't involve running  at all (which suited me fine); a cub with a starless cap was given a message at the end of one meeting and  had to memorize it for the following week. To this day I can't hear the words 'St Malo' without completing  the fragment of travel brochure that they used: "charming walled city on the Emerald Coast of Brittany".

– and the stars represented the opening eyes of a baby wolf cub. Being in the Cubs was an experience that I associate with cold knees...

Brief Tale from the Word-Face

On my initial trawl through words that contain *al* I have reached a word whose inclusion in Macmillan English Dictionary for Advanced learners  (that's the paperback rather than the online thing, but still...) raises an eyebrow; it is cytomegalovirus. Call me old-fashioned, limiting my students by unnecessarily low expectations, but I really don't expect a learner, however 'advanced', to need a specific definition of that sort of word. They may indeed come across it in what used to be called 'broadsheets' (before they all newspapers started trimming their sails) but they will by other elements of cultural education have learnt to break that daunting word down into  cyto- + megalo- + virus, (incidentally sorting out the stresses in that polysyllable), and supplying a specific dictionary entry just impedes that progress.

OK, the User Guide is rubbish; but that doesn't explain the whole problem. Bad documentation leads to bad practice. Given that the PDF was useless, I had to rely on the  tool itself. There was an image pointing to what seemed to be  a retaining nut. (On another tool I had, such a nut was a safety device: unless it was tightened, the motor wouldn't run. So I assumed that it was necessary to be in control of this nut-like thing.)

The image had two extremities; one was a spanner, the other was a finger pointing. I interpreted this – as did MrsK – as meaning ‘Use a spanner to undo this‘.  And the list of parts included the word wrench†. If the User Guide itself had not been missing, I might have interpreted this image as meaning ‘Here is the spanner. Pull it out gently, using only your finger and thumb.‘

But I didn't. Assuming the promised wrench was missing too, I used a spanner, and tried to turn it. This picture shows the result: 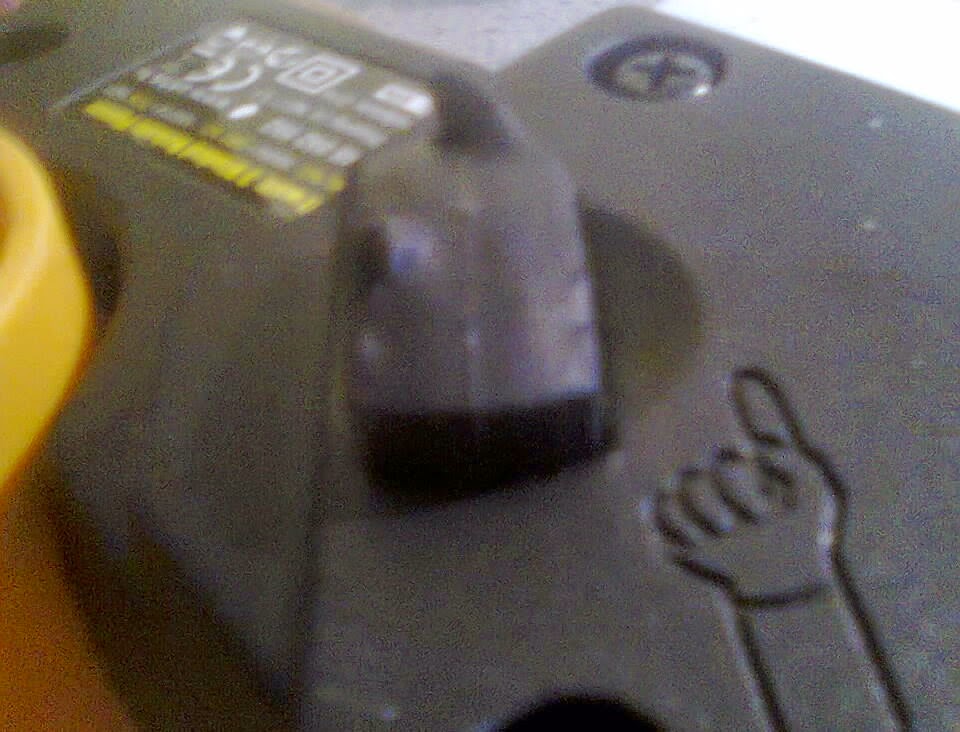 Which I hope explains my rant: my lips are sealed, though, expletive-wise. [But really, they might as well ship these things  pre-broken

†The actual words – in an apparently numbered list, which has  nothing but the number '1' 5 times – are 'tightening wrench', which suggests the question 'Is there another sort?'

Update 2018.04.15.18:30 – Fixed a typo or two, and reworded (after I‘d worked out what I meant). I still think the  word sequence was OK in those instructions for writing lists, but sequentiality makes it easier to parse the parenthesis.