No particulate place to go

Today‘s subject announces a valuable competition. No age-restrictions. The prize: IMMORTALITY. Brief: make a .jpeg or .png of a cartoon copy of this incompetent version (which reflects the fact that I didn't see eye-to-eye with ‘Pug' [as, for obvious reasons, we knew our art master – Father Ignatius]). I see it in the style of ‘Larry‘ (particularly the furtive emissions character, who I shall refer to for convenience as Mr Smokey). 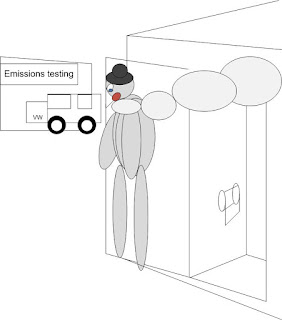 Grist to the mill


It might work better as a comic strip:
Anyway, it's up to you.

And now, the thought for the day, on echolalia, or

the tendency to repeat mechanically words just spoken by another person: can occur in cases of brain damage, mental retardation, and schizophrenia

as Collins puts it. That dictionary classifies the word as pertaining particularly to the world of psychiatry, but I know it from the world of language (where it might have another name – I just like the word echolalia)

Some languages do it systematically. The response to the Continental Portuguese (I don't think this is true of Brazilian) Fala Português? , for example, is Falo sim or Não falo, não [or Falava sim bastante bem há 40 anos, mas agora...{="Yes, I used to speak it quite well 40 years ago, but now..."}] This involves a certain amount of linguistic processing on the part of the respondent; they need to identify the verb in the question and then change the ending (so that it's first person rather than second). Often this is not too difficult, but irregular verbs can confuse the issue.


<digression type="autobiographical note">
I'm reminded, not entirely relevantly, as echolalia doesn't come into it, of an exchange I had (I won't call it a conversation, which would've been barely possible at the time) with a young Argentinian woman in Bilbao arcelona, where I was starting to learn Spanish. After work one day (the nature of which is discussed here) María Fernanda said Contános. She was asking me what had happened that day.

In much of South America, they speak Spanish but with many differences from the Castilian Spanish largely taught in schools. The crucial difference in this case is in verb inflections. Argentina preserves the informal second person vos (originally plural as in Old Castilian, in current Spanish (but with -otros tacked on*)  and in modern(-ish [older people use it {or at least did in 1971}] ) Portuguese, but in the singular. The informal Spanish imperative plural of contar is contad – with stress on the second syllable.

The imperative singular of contar  was – according to the O-level grammar book I was using at the time – cuenta (the stress on the etymological o causing the diphthong). So, if I had reached the bit in the book that dealt with the position of object pronouns (doubtful), I would have expected cuéntanos in place of María Fernanda's 'Contános'.
</digression>

The subject of people repeating things said  – especially in the context of language-learning – came to mind while I was listening to the first of the Price of Oil series plays on Saturday, Stand Firm, You Cads!; it‘s about 22-23 minutes  in, in a conversation between an Englishwoman and a speaker of English as a second language whose mother tongue is Farsi:

He:   You didn't get anything wrong.

This didn't ring true for me, as a student of other languages. The speaker of ESOL was a competent speaker; and I know no Farsi – but it's possible, though improbable, that Farsi has an idiom that translates word-for-word as 'to get something wrong'. If this is true, that's just the sort of lucky coincidence that language learners hang on to (and a prolific source of near-misses – false friends) like 'take French leave' [which doesn't mean the same as filer à l'anglaise]).

But otherwise I feel it would be more likely that the speaker of ESOL would reflect back the native speaker's expression and say "You didn't misjudge anything'.

In the mid '70s I was on the books of the police as an interpreter. This could be quite exciting (being called in the small hours and given a lift in a Jamjar that could jump red lights with impunity, for example). On one occasion I was called to interpret for some Brazilian students who had had a few drinks and made off with a dustbin-lid. In the car on the way to the Station I was talking to the arresting officers, trying to glean the details of the alleged offence (so that I could rehearse the appropriate vocabulary, and if necessary think up some periphrases to make up for lacunae).

The crucial word was 'dustbin-lid', and I had no idea how to say it. It was with huge relief that I heard the students blurt out, as soon as they saw me, o tampo de lixo,

Speakers of foreign languages rely very heavily on what they hear.


That's all for today.

PS A clue:  Wind about one means of avoiding a possible miscarriage of justice. (8)

* I made the unreasonable assumption that everyone had a passing knowledge of Spanish when I added this rather gnomic parenthesis. The Spanish vosotros means you (plural and informal). By coincidence, French does a similar thing, but with a word-break; and the result is extremely informal (meaning something like "you lot" – vous autres).


Mammon When Vowels Get Together V5.2: Collection of Kindle word-lists grouping different pronunciations of vowel-pairs. Now complete (that is, it covers all vowel pairs – but there's still stuff to be done with it; an index, perhaps...?)