An article in last Saturday's Times (yes, I know, The Times [sigh]) was a less than glowing review of Richard Dawkins's new book. Not having read (nor intending to read)  it (the book, that is), I don't mean to add to the review, but one assertion quoted leapt to my attention as dubious: 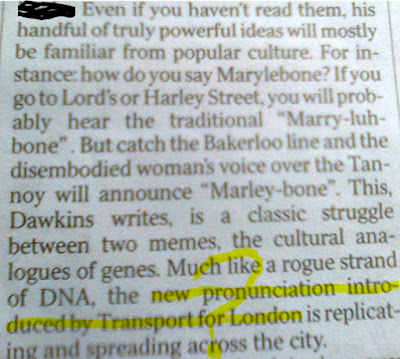 Really? I was saying /'mɑ:li:bəʊn/ (in the brief few turns it took to buy me out of a game of Monopoly™  in those days) several decades before Transport for London was even dreamt of. I wish the reviewer had been more punctilious with his punctuation, as on the basis of this it's nigh-on impossible to determine which bits of the assertion are those of Dawkins. But I imagine the Marylebone instance is his, as is the faintly ridiculous 'classic [BK: Really? Has he any idea of what 'classic' means?] struggle between two memes'. But this isn't a review, so I'll lay off.

Excuse my use of IPA symbols...


<rant flame="simmer">
I have ranted about this before, somewhere  in the UsingEnglish forums, but I can't find  where. So some readers may get a sense of déjà-lu  – but probably not. (And I did mean -lu.)  Anyway, here I go again.

When you know your audience (and that word is crucial  –  when people can hear you) it's OK to say things like 'lear sounds like leer'. 'Sounds like' is meaningful only if there's a known sound to compare. But when you're writing – say, in an online forum – it's not so easy. What  if one of your readers has just learnt bear, pear, tear (NOT the lachrymal sort) or wear, so that the /eǝ/ sound is uppermost in their short-term memory of English sounds? You've told them that leer is pronounced  /leǝ/.

Or suppose one of your readers mispronounces law as /lǝʊ/  –  a common enough mistake in an ESOL classroom   –  and you write that a word  'sounds like law'. Again, you've misinformed them. And I don't think that's too strong a word, at  least not in a language-teaching context.  If the teacher wants to communicate something, it's part of the job to make sure it's understood correctly.

People complain about 'having to learn a whole new alphabet'. That's nonsense, particularly in the case of English  – which can be adequately transcribed using the letters of the alphabet (most with 'their own' sound – b ⇨ /b/, k ⇨ /k/, s ⇨ /s/, and so on) with a dozen or so new symbols). The system can be taught in a few lessons, makes dictionaries infinitely more informative, absorbing and rewarding, makes modelling and correcting sounds easier and clearer, supports increased learner autonomy.... And yet many learners (and even quite a few teachers, to my utter bewilderment – as I can't conceive of learning a new language [except by total immersion] without using the IPA) resist the idea of learning/teaching IPA symbols.

<digression>
There are various stories about etymology of that word. [Marylebone, remember?] This site says


...In the thirteenth century when the language of the aristocracy was French, St-Mary-by-the-Tyburn would have been St-Mary-a-le-Bourne (‘bourne’ being the French for a small stream) and from this we arrive at the word ‘Marylebone’ as we know it today.

Based on this etymology and a progression of phonetics, the correct way of pronouncing ‘Marylebone’ is widely considered to be ‘Marry-leh-bon’ – although in reality this is rarely heard.

As to the meaning of "a progression of phonetics" your guess is as good as mine – though I imagine it may mean something like 'a number of both phonetic and phonological changes' ; after all, those 13th-century origins pre-dated the Great Vowel Shift.

I once gleaned, from a source that I regarded at the time as authoritative (although as this was in the late '60s I no doubt set the bar pretty low), that ‘-le-bone' just meant 'the good', as le was feminine at the time,  and the convention of doubling a word-final consonant before adding an e for the feminine (for example bon/bonne, cadet/cadette, Bourgignon/Bourgignonne...

<mini-rant status="stillborn">
No, I won't but... If people would just pronounce the /n/ when they say Bœuf Bourgignonne.  PLEASE.
</mini-rant>

... etc.) had not yet been adopted by the Académie – which had surely ... (nope, not until the mid-17th) not yet been set up.  Still, -a-le-bourne is plausible enough, and I'm not going to lose any sleep over it either way. On the one hand, beware folk etymologies, especially on special-interest web sites; on the other hand, what's the point  of saying 'St Mary the Good' at all, unless there were a... aha, maybe Mary Magdalene was 'Mary the Bad' (not so 'bad', though, as to stop her being canonized in the end [for all that, by all accounts, she was no better than she SHOULD be, if you catch my drift, and note the colour of this parenthesis. St-Mary-the-Not-So-Bad-Really-(just-not-the-one-in-the-blue-frock), perhaps]).
</digression>

And by the way, while we're on the subject of what was said and when., in that (i.e. Saturday; do keep up) night's televised version of An Inspector Calls, some of the dialogue was surely in Priestley's original. Just before the Great War, it makes sense for both Sheila and the Inspector to say during the 31st minute, 'Why had this to happen?' (where an 21st-century speaker would say 'Why did this have to happen?' – or would they? Maybe it's the sort of Northern English syntax that's still current... I can imagine Sir Geoffrey saying it.)

On the other hand, bits of the dialogue stick out like... something very sticky-outy [I'm avoiding clichés like the pl... um, like something jolly bargepole-y]. Would Gerald really have said 'It's a question of the bottom line'? (the context is a bit uncertain, as I can't find the reference, but he certainly used the expression the bottom line, which Etymonline says is  attested from 1967.)

Well, must be off.

PS A couple of clues:

PPS The answers: it's been so long that it took me a while to work them out – DIDO'S LAMENT and MIMETIC