Brief Tale from the Word-Face

Last year (two years ago – talk about time's wingéd chariot...) I wrote this:


I was in Truro at the end of my choir's short tour of the West Country, of which more anon. But before I go I can't resist an etymological reflection induced by my visit to the Mayflower Exhibition.

Plymouth was noted for being a Roundhead stronghold during the English Civil War – and that name for the Puritans' soldiers, was coined with reference to their headgear (I prefer the soldiers' helmet theory to the pudding-basin haircut theory expounded – very briefly – here).

The Roundhead soldiers were by no means the first fighting force to be given a nickname based on what their heads looked like. When Roman soldiers occupied Gaul the locals thought that their helmets looked like cooking pots (Vulgar Latin TESTA(M)). Among all the Romance-language names for head (capo, cabo, cabeza, cabeça ...) where does the French tête come from? Well, here's a hint; the circumflex in French is often a vestige of an s.

I left the conclusion as an exercise for the reader (which I'm still doing).

The second of these has spurred me into renewed efforts on the next in the series, which led to this:

The picture is fairly self explanatory, and depends (as usual) on my dysdactylographical ability. I was entering the word depilatory into a spreadsheet: 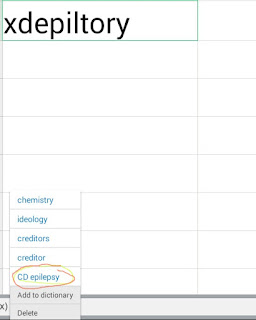 I have difficulty in imagining what CD epilepsy might be, but it sounds very last century. Haven't they heard of streaming?

That's all for now. The book (and garden) awaits (AWAIT), and the weekend will be unproductive (TCB performance on Saturday and birthday lunch on Sunday (giving poignancy to the question


Will you still feed me?


which may give you an age-related clue.)