Last week on Computing Britain,  a long-held belief of mine was called into question – but by stealth. In the 10th minute the presenter of that short broadcast says


...the American military think-tank the Rand Corporation ..among other things [NB pre-emptive strike against accusations of  'quoting out of context' {for heaven's sake, what is a quotation if not words taken away from the surrounding words (AKA 'context')}], aimed to design a computer network that would survive a nuclear attack.

'I knew that', I thought. I mentioned it here. Next. When's she going to mention X.25 or JANET?' [she didn't, but I'm sure Wikipedia will fill you in if you're that interested.]

But a few minutes later, about 11'58", the wheels start to come off. 'But there is one thing we must get clear' says the presenter and then cuts to an ARPA-net engineer:


There is a myth that has been going around for 30-odd years that the ARPA-net was constructed in order to protect the United States against a nuclear attack. False. Totally false. [BK: And the presenter continues:]  No. ARPA-net... was built for sharing of computer resources, not for surviving a nuclear attack. It just so happened that the design had also emerged from thinking in that area. 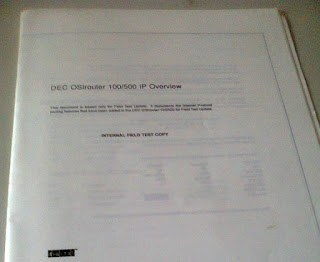 Hmm. Do I detect some doubleplusgood duckspeaking, to borrow Orwell's term? The ‘myth', to whose dissemination I may have contributed in a document I wrote in the early '90s (was I an early carrier of the "myth" [an iconopoet {like an iconoclast, but making rather than breaking}]? – I don't know without wasting time trawling through stuff I wrote 35 years ago). If I didn't write it down, I was certainly told it by my main research source; and I've certainly repeated it since.

But things don't happen in a vacuum, especially not in the field of technology. One idea sparks off another and there follows a chain-reaction of ideas sparking off new ideas. The ability to withstand a nuclear strike (not to 'protect the US against a nuclear strike' – Geez, what planet is this guy on?) was one of the design criteria that underlay a predecessor of the ARPA-net.

<rant>
And why does he have to call it a MYTH? As I've said before here (and probably elsewhere) this is a sore point with me. Generally – from the point of view of the culture they belong to – myths are a Good Thing.

I remember a Latin-American Studies seminar in the mid-'70s that featured an interesting expansion of  myth-related terminology.  The leader of the seminar said she wanted to ‘explode the myth of... [something]', and my hackles started to rise.

But they needn't have. She said she wanted to explode a myth in the sense of explode used in the phrase exploded diagram. In other words, she was going to take it apart and show how it all fitted together – an illuminating, interesting, and creative use of the expression.

Besides, even overlooking the abuse of the word myth, I am sick and tired (yes, both) of people who parade their greater knowledge by dismissing out of hand the beliefs of us lesser mortals when those beliefs, while not 100% correct, contain a grain of truth that is worth examining.
</rant>