In 40 days as I type, on 21 November, my choir will be singing Elijah, which might never have included one of its best-loved arias. We shall be singing from Michael Pilkington's 1991 edition (called, on its title page,  New Novello Choral Edition  – as opposed to my old 1951 edition Novello's Original Octavo Edition (confusingly announcing itself as

Mendelssohn was a self-willed collaborator, as this exchange with an early [putative] librettist suggests:


1 November, 1838, Pastor Schubring to Mendelssohn:
The thing [an early plan of Elijah] is becoming too objective – an interesting, even a thrilling picture, but far from edifying the heart of the listener....[W]e must diligently set to work to keep down the dramatic, and raise the sacred element, and always aim at this.

2 November 1838, Mendelssohn to Schubring:
I am glad to learn you are searching out the... sense of the Scriptural words, but if I might make one observation, it is that I would fain see the exuberant and defined...

17 November, 1838, Schubring to Mendelssohn
I am more and more convinced that you will have to supply the principal part of the text yourself.

6 December, 1838, Mendelssohn to Schubring:
With regard to the dramatic element, there still seems to be a diversity of opinion between us. With a subject like "Elijah" it appears to me that the dramatic element should predominate.... [F]or heaven's sake let them not be a musical picture, but a real world, such as you find in every chapter of the Old Testament.

The dates of the letters tell their own story.  The second is dated the day after the first (which in fact was not really the first, as Schubring had written a shorter note the day before). Then Schubring mulls over the issue for over two weeks. Nearly three weeks later Mendelssohn replies. After that, two months went by before Schubring wrote again, 'and in this he makes it clear that the subject, at least on Mendelssohn's terms, is too much for him' (says my later edition). Schubring's career as librettist was chequered.

Aria no. 31, O rest in the Lord, had a chequered career too.  Mendelssohn's sparring partner this time was William Bartholomew, an employee of the original publisher, who wrote that 'he thought he could trace some resemblance to the melody of the song Auld Robin Gray' in the melody as originally written:


I do not recollect having heard the Scottish ballad to which you allude, and certainly did not think of it, and did not choose to imitate it; but as mine is a song to which I always had an objection (of another kind), and as the ballad seems much known, and the likeness very strong, and before all, as you wish it, I shall leave it out altogether (I think)...

'[T]he likeness very strong'? Here's the beginning of the ballad:

The key's the same, trivially [no doubt editorial]; and the rhythms are similar (but by no means identical). The first five notes in ARG are moving step-wise up a scale, unlike Mendelssohn's.

But Mendelssohn thought he'd leave it out altogether. Now it was Bartholomew's turn to protest; the biographer of Mendelssohn, F. G. Edwards (editor of my old score) wrote:

Bartholomew... begged him to retain the air, and to change a note or two...

Well in the end, at the eleventh hour (too late to do the job properly all through the aria, he moved the G of Herrn [Lord], the fifth note  of the tune (which itself is the fifth degree of the scale – spooky or what?)  back down to C in the opening bars. But he either forgot or didn't bother to change that melody when it recurs twice in the coda: 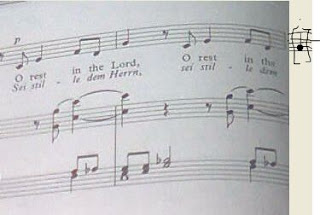 It seems to me that Mendelssohn's youthful time in Scotland, which inspired both The Hebrides Overture and his 3rd Symphony – his first visit took place shortly before he wrote that original melody – almost certainly exposed him to Auld Robin Gray. But as readers of a very early post of mine will know,

Far be it from me to make any charge of  'plagiarism'; I believe in the 'Ten Green Bottles' theory of musical history. [I had previously mentioned


...words spoken by an MD of my youthful acquaintance: 'There has only been one tune written in the history of the world - "Ten Green Bottles".'

.... But it's not just Pop and 'Classical' - those quotation marks are tweezers, registering my distaste ... [BK – I had previously been discussing a link between Handel and Eric Clapton] [A]s someone said in The Electric Muse (Robin Denselow, I think, but there were three others included in the et al) if you listen carefully to a Jack Bruce bass line (in a Cream number, if I remember rightly) you'll hear the folk song 'The Cutty Wren'.

Besides, I don't see what improvement Mendelssohn's rewrite represents.

Thankfully, Mendelssohn had his way, and Elijah is marked by 'appeal and rejoinder, question and answer, sudden interruptions etc' (as Mendelssohn had written to Schubring on 2 Nov. 1838).

But.... I was going to say a bit about word-painting. Only 8 more rehearsals to go though, so it'll have to wait for an update. I must go and do some note-bashing....