In this week's Start the Week on BBC Radio 4, Rowan Williams was talking about his new book The Way of St Benedict., which led me to think about the many appearances of Benedict in my life.

The first was as near home as you can get. When looking for a house to buy, my father had three priorities: nearness to church, RC school, and Ealing studios (in that order). He got the first two spot on: the church and the school were within walking distance. The journey to Ealing Studios (where he worked at the time)  would have taken a little longer – maybe 15-20 minutes in the Standard Vanguard (known, for reasons I  never questioned, as "the Green Lizard"):

The church and school were named for St Benedict, as was indirectly...

Very indirectly. Father Ben (sic  – younger and trendier than most of his peers) named the youth club he started after the bird that figured on the school's emblem: "the Corbie": 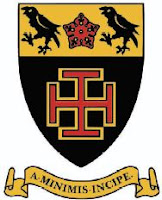 <subparenthesis>
And there are twa. I wonder.... Probably not though. I suspect the corbies were just a heraldic pun referring to the great Benedictine foundation in Picardy: Corbie Abbey. (Although perhaps the designer of those arms knew the song.)</subparenthesis>

... the folk club that was the scene of my first guitar-related efforts.

<you-at-the-back command="Wake up">
Do I really need to point out that this is one of several French names cognate with "Benedict"?
</you-at-the-back>

... was "my" member of the Regnault family, who lived in Motteville.

<background-info>
Throughout the 1960s my family took part in a number of exchange visits with a family made up of conveniently spaced children. Jo exchanged with Odile, Mick with Denis, Angela with Vincent, I with Benoît, and Yag [don't ask] with Nicolas (note the names; we were matched in religion, an important consideration at the time,  as well as age).
</background-info>

Which brings me to Bene't – presumably the anglicized version of Benoît.  My college at Cambridge was built next to St Benet's Church – and at one time was known colloquially as "Bene't College". The church stands in Bene't Street, scene of a bit of unconsummated ésprit d'éscalier recounted here:

A few years ago I was in Cambridge, and missed a trick. I was at the front of the crowdlet in front of the Chronophage [HD: See here], and a tourist behind  me wondered aloud what the inscription meant:

It took me a while to work it out, as two of the less obvious words (everything except transit, et and ejus) had glyphs that hid the letters un and en behind the conventional stone mason's tilde, giving ũ and ẽ. But what it says could be rendered as The world passes, as does its concupiscence. (I think the comma justifies my as does).

The trick I missed was the opportunity to give the tourists the impression that round every corner (the Chronopage is on the corner of Bene't St) in Cambridge there lurks a Vulgar Latinist. (And if you want to know more about concupiscence, read that post.)

There are other Benedicts in my life; a nephew, the celebrant of my little sister's wedding, the patron saint of Europe (who seems to have taken his eye off the ball spectacularly in the last few years), my choir's multi-talented accompanist ...

But what of my subject line, particularly the expression well said?  Well, according to Wikipedia, ...

...which strikes me as broadly true (though I wonder what 'dicte "speak"' is supposed to  mean...

<tangent>
Why the inflexion -e on dicte? Why cite a root in the ablative? I suspect the writer had only a passing acquaintance (if that) with Latin, and maybe once had a penpal called Bénédicte.
</tangent>

...) but crucially irrelevant. A person who in Latin is benedictus is not "well-spoken" but is BLESSÉD*. In the words of the Sanctus "he who comes in the way name of the Lord" is blesséd:

<tangent>
"He who comes in the way name of the Lord is well-spoken?" Just as well, really. We don't want any of those ill-spoken yobs coming in the name of the Lord.  What would people think?
</tangent>

The speaker of the good things is Himself – and it would be either anathema or pointless or meaningless (depending on your beliefs) to pass judgment on His elocution.

That's all for now

When listing Benedicts in my life, I missed an obvious one, which I might have remembered if I'd read the WCS rehearsal schedule for last night before I hit Publish. We were due to sing the Benedictus  from Beethoven's Mass in C (although in the rehearsal we overran on the Credo and didn't get round to it).

<parenthesis>
And when I said "in the words of the Sanctus " I meant it. Most composers treat the Sanctus and the Benedictus as separate movements (though often there is an actual or implied attaca linking the two, and each is followed by a Hosanna with broadly the same notes). But the Benedictus is part of the same prayer – at least it was in my altar-boy days.
</parenthesis>

* I've just become aware of a case of contrasted benedicts versus Bad Lots that will be well-known to singers of various Requiems. The Ur-Requiem in my mind is Mozart's: in the Confutatis maledictis an ominous figure in the lower voices is interrupted by an angelic Voca me cum benedictis in the upper voices ("Call me [to be/to stand/to stay] with the blesséd [as opposed to the maledictis]. The music forces an interpretation that isn't strictly there in the prayer. The infernal tune and lower voices mark the maledicti. The angelic tune and upper voices stand for the benedicti. But in the prayer there is only one voice – that of a soul awaiting judgment: "When the wrong-doers have been condemned to Hell [confutatis maledictis] ...

<inline-pps>
(Some of the more attentive readers, if not deprived of the schooling in Latin that is everyone's birthright,  may have recognized the ablative absolute here –  "Caesar having thrown a bridge across the river" sort of thing.)
</inline-pps>