Last week I met a new word – well, new to me. BBC Radio 4's Book of the Week was a version of The Good Germans, which began:

My hackles rose at that first sentence (on the radio), as the reader omitted the commas, and I tried to imagine what a "Gymnasium grammar school" was.

It had to be taken down. The caretaker claimed not to be able to find the key to the tower, but the day was saved by the one-armed French master, a mutilé de guerre, who climbed up unibrachially (as is the wont of the one-armed... and don't bother looking that word up) and took it down. The narrative goes on:

(which reminds me of my history master, who larded his lessons with contemporary quotations: "Roll up that map of Europe", "Blood and iron", "Contemptible little army"... that sort of thing. The watchword for The Battle of Verdun was Ils ne passeront pas. Such quotations were the key to writing good history essays, he said.

In the mid-late '70s, I was visiting a friend in Paris. On one occasion, on the Metro,  I was standing, unhelpfully, in the middle of the carriage's doorway as it drew into a station.  And, as the bottleneck tightened, I was slow to get out of the way of the massed Parisians...

<regret>
(I thought my hostess, who had introduced me to the pun 'One man's Mede is another man's Persian' [which turns out to be less original than I initially thought] would appreciate the joke, but she was sufficiently acclimatised [though a  native of New Jersey] to be rather quick to join in with the general hostility to the boorish behaviour of this particular rozbif.
</regret>

...as I mused on how appropriate the station's name (Verdun) was: Ils ne passeront pas du tout.  Mr Crosby would have been proud.

A few weeks ago I made the mistake of watching For a Few Dollars More again. The music was fun, but the action was  – as I should have remembered – tedious; lots of our hero riding backwards and forwards watching other horsemen riding pointlessly in the distance. My boredom was assuaged by the vagaries of the subtitles.

The protagonist did everything but shoot with his left hand, and I got an inkling of who was about to figure in the plot when a bounty-hunter's name was revealed as Manco...

...Spanish for "one-armed man". Manco was an appropriate nick-name for a gunfighter with this trait.

But the subtitle said Monco. I thought I had noticed an issue that is heightened when British ears meet American pronunciation of what in British English is /ɒ/ (the stressed vowel in "biology").

<inline_PPS>
I'm not sure what this link will do for you. You may need to instal the free Cloud ePub Reader (but the link could automagically enlist the aid of the Reader installed on my system).
<inline_PPS>

...found that areas of study, from astrology to zoology, were all -ologies, with one exception, genealogy. But some American English pronunciations of words that in British English have an /ɒ/ have a vowel not unlike the /æ/ used in British English to (sometimes) represent a written o.*

<inline_ps>
Here is the note I wrote in that book.

Perhaps because of the popularity of genealogy on the Internet, the American English pronunciation (which Cambridge Dictionary of American English gives as having either /æl/ or /ɑl/) is often misheard, misreported, and then mistakenly learnt as /ɒ/ and misspelt as geneology. As this is the only -alogy in English, it is possible that the erosion will continue, and that in 22nd-century English the a spelling will seem as old-fashioned as – for example – shew or 'bus does today.

The craze for genealogy is something I associate with the USA – possibly because of the Mormons' records in Utah. Anyway when an American speaker says genealogy it's easy for a British English speaker to assume it's spelt geneology – which has become a fairly common mistake (Google, after you've convinced it that you don't really want "genealogy" reports more than 1.5 million instances) My guess is that over the next hundred or so years (Global Warming Permitting) it will become increasingly common (and ultimately accepted as right).

So when I saw Monco I assumed that the person writing the subtitles had simply misheard.

But the truth is much less interesting. The many script-writers (credited and uncredited, including Sergio Leone twice) were Italian, and Italian for one-handed is Monco. Of course, the idea of a bounty-hunter in an originally Spanish-speaking part of the world adopting an Italian nick-name is ridiculous; and if the thing had really happened he would have been called Manco.  But the mistake wasn't the subtitle-writer's; it was the script-writers'.

That's all for now. Time for guitar practice  –  a much simplified version of Albéniz's Leyenda (which I think, eerily, means "subtitle" [in some secondary meaning in a misremembered language that I don't have time to research])

* Early readers may have noticed a typo here – I initially put "a". Sorry, I find that not using the  IPA symbols gets very confusing. 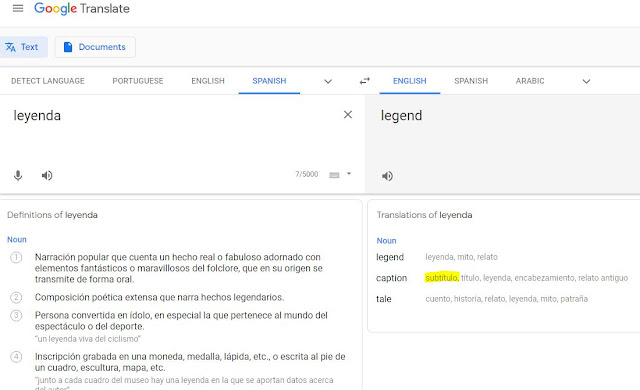