Nearly eight years ago here in the first months of this blog (when this blog was nascent [before  its adolescence and – some would say – senescence]) I first visited the idea of inchoative infixes. Etymonline skates over them, rather missing the point, I would suggest, by calling -escent a suffix...

<weasel-words>
(in case anyone actually bothers to follow that link, I'd better admit that Etymonline doesn't actually use the word "suffix"; but it does call -escent a "word-forming element", showing a cavalier disregard for Occam's razor and ignoring all the -asc, -isc, and -usc- cases hinted at in my subject line.

There may well be an -osc- word to complete the picture, but I can't think of it off-hand. Maybe "osculate" is all about puckering up before you O someone. Or "proboscis"...? But what's starting or growing about a proboscis, except in a special case such as Pinocchio? (That's not a serious suggestion, although some research into whatever preceded Latin might be interesting.... Probably not though.)
</FFS>

...What Latin did with an inchoative infix was take a verb like florere (="to flower") and add an  -esc-   before the ending to make it mean "start flowering"/"burst into flower": florescere.

(Which, incidentally, is where our verb "flourish" comes from [ultimately].)

And while I'm in the realms of full disclosure, I should admit that experts say infixation only happened with -esc- and -isc-; I'm not so sure, although those two infixes are by far the most common.
</weasel-words>

But this coining of new inchoative words by using an infix was not what linguists call "a productive mechanism" in the forming of Romance languages; they simply took the verb form and did what suited their needs. As I wrote in  that old post

In fact Elcock, in The Romance Languages says 'of all the innovations in the active verb of Vulgar Latin, perhaps the most noteworthy is the extension of the -ESC/ISC infix'...[which was] more influential as a basis for the formation of Romance language verbs [Fr.  finissons/finissez/finissent/etc from  finir, etc] – where there is no sense of 'inchoateness', and the infix just introduces this 'regular irregularity' to French -ir verbs;...

This one took me a while to work out after eight years. I suppose readers at the time just dismissed it as further evidence of a confused mind. What I meant by "regular irregularity" was just that "-ss-" suddenly appears from nowhere in the new verb paradigm.

...in Spanish and Portuguese they didn't use it as an infix at all, and used -ESCERE as a rather long suffix. to create verbs such a aparecer – 'appear' – presumably distantly related to Latin aperire   'to open' (as in French, careful readers will notice that it happens only to –IRE verbs).

And this all started with a harmless reflection on the word "opalescent".  Like "fluorescent" and "iridescent"  the idea of inchoateness (="beginning/becoming", roughly) is here only in the sense that the image is always becoming something else. It is, to use a word coined by the wearer of the opal in question many years ago, sprickly. 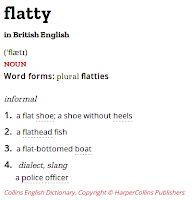 PS A chance observation. There exists in English the word flatty. Its primary meaning (among several) is a sort of shoe:

But it's not that common a word. Collins gives this usage graph: 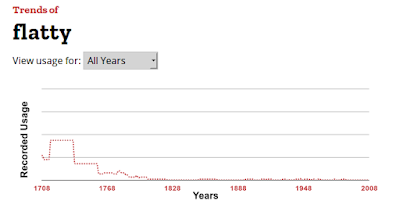 It was quite popular (with some meaning) in the eighteenth century, went downhill in the nineteenth, and has been next to moribund since then (but not so moribund as to escape my attention: I first met it when such footwear was prescribed for my oldest sister when she played a pirate in HMS Pinafore).
Now good old M&S  has resurrected it, and not without effrontery they have even slapped a trademark on it. FlattiesTM  are escalopes of chicken tenderized/marinaded in various ways. They are quite pleasant to eat; I'm not sure what makes them trademarkable though.
And this is not the first time a shoe name has been used to refer to a foodstuff. In 1982 "a baker in Adria, province of Rovigo, Veneto, Italy [created them]  in response to the popularity of French baguettes", says Wikipedia. Whereas the French called their sort of bread "drumsticks" (which takes us in a coincidental circle back to chickens) he called his new loaf a ciabatta (which means slipper). And don't talk to me about choux buns [Bou-boum]
But there is an ongoing biomass crisis in the garden that I must attend to.