OK, it's a fair cop. Pedantry is not a stranger to  me.  I've dealt, often in this blog, with linguistic pedantry; one of my more visited posts is this one, the first of two trottings out of one of my most cherished bons mots, about "pedants of the world having nothing to lose but their chains" (make that three trottings out).

I'm not a fan of this sort of pedantry; not that that spares me from being prey to it from time to time. It's hard not to be , the way people throw words around quite disirregardless of their proper meaning,

<irony_warning>
And, as they say in the UNIX world, send complaints about that use of "proper" to /dev/null/.
</irony_warning>

A bridge between linguistic pedantry and the sort of pedantry I want to address now is somewhere in this (which I have no time to trawl through just now for the sake of a spot reference, and besides, "no names, no pack drill") someone who had put together a virtual choir said that the effort involved increased exponentially with the number of recordings and he or she...

<parenthesis>
(well, I know which, but to specify which would spill the beans as – apart from the ring-mistress – there was only one wo..[oops])
<?parenthesis>

... said "and I don't need to explain about exponential growth" (or words to that effect). And it's clear that the speaker wouldn't have been able to explain it. My savings, with varying interest rates (averaging not much more than than 1.5%), grow exponentially, but the exponent in question is about 1.0015. With an exponent of significantly more than one, exponential growth is indeed very fast and getting faster and faster (roughly what people mean when they use the word), but if the exponent is one-and-a-smidgen the growth rate is nugatory, and when the exponent is less than one....

<home_study_recommendation>
Somewhere on the net you'll find a story about someone doing a service for a Chinese emperor (aren't they always?) who says – do they never learn? – "Ask of me anything you want". And the doer of the service spots a chessboard (there's usually one lying around) and asks the emperor to give him one grain of rice on the first square, two on the second, four on the third, eight on the fourth etc. doubling all the way to 64, and aggregating all the contents of the previous squares. The total is (as I remember) astronomical (really) – anyway, it's huge (not that all those kilos of rice would fit on the squares, if I'm being honest). There the exponent is 2, and the growth really is great.
</home_study_recommendation>

...But she knew what she meant. and everybody else did . So I should give her a break.

Anyway, this is the sort of pedantry I want to address: arithmetical pedantry – usually influenced by a teacher or teachers. At my primary school, when we started adding and taking away ...

<autobiographical_note type="Oh, the naivety">
At secondary school "taking away" was scorned in favour of "subtracting". I still have a vision of Doc Lewis's withering scorn...

<tangent>
Excuse the cliché: is there any other sort? <blush />
</tangent>

...when people on Countdown say "times it by..."; "The word is multiply, boy."
</autobiographical_note>

... we were told to label the columns "H/T/U". A "1" in the H column stood for "100". In fact, although we hadn't yet thought about the wonders of this new-fangled zero thing (the Romans managed without it), that's what the zeros in 100 are doing – making sure the "1" stays in the H column and doesn't migrate to somewhere else where it would mean something different.

I must get on.... But my mind has been occupied of late with this carol competition. I've been following this on Radio 3 Breakfast for a few years now, but it's always seemed beyond me. People submitted complex 4-part settings of modern poems.
But  numbers must have been falling off...

<rant>
(one could ask a woeful succession of Education Ministers why, I suspect; but is there any wonder that people in this benighted country couldn't tell a melisma from a melanoma? )
</rant>

..., and now they've moved the goalposts; the competition people simply want a melody, which I  can just about do ("Has ability but is disinclined to use it musically" wrote my music master, in the days when teachers were allowed to put what they liked in school reports.)
The rules require a melody for one verse, suitable for all the others.  How can you do any word-painting when you don't control the arrangement?
Still, it's done now: 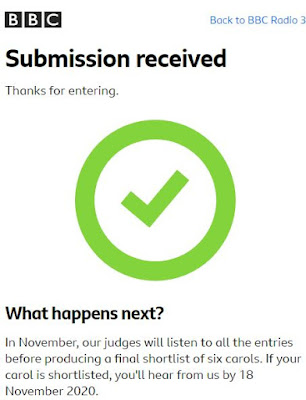 ...ingrained in me by Doc Lewis  is the habit of many commentators (particularly sports commentators) to keep the HTU words even after the decimal point: "reducing the world record to nine point twenty-four seconds". No. no, no. in the expression "9.24 seconds" the 24 isn't twenty-four; twenty is represented by a 2 in the Tens column; in 9.24 the .24 stands for two tenths and four hundredths. Calling that sort of 2 "twenty" is making the same mistake as calling 31 "twenty eleven", because when you get 11 in the Units column you put down a one and carry a one – every fule no that.

Of course, there is a language that – while not saying "twenty eleven" – does say "sixty eleven": soixante onze: a Guardian Notes & Queries page explores the tip of the septante huitante nonante issue,  which is partly (as far as quatre vingts is concerned) due to the fact that the Celtic language spoken in Gallia Transalpina before the Romans came and taught them how to speak proper used a vigesimal (base 20) counting system. In fact, that vigesimal counting system affects English dialects as well. A friend of mine with a holiday home in Swaffham once heard a farmer talking about "half a score of pigs".  (The word score itself suggests a vigesimal counting system, but the phrase "half a score" seems to me more persuasive, as it deliberately avoids the word "ten".)
Still more numerical navel-gazing to come, but I must show my face in the Real World.
b