... or smoke and mirrors 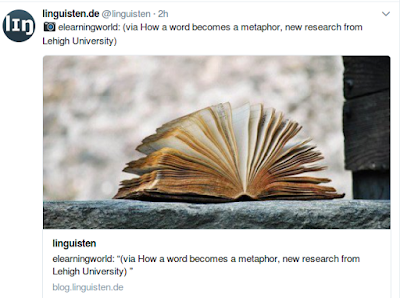 I dutifully (well, some would say pursuing ideas is an act of self-indulgence rather than duty: discuss) followed the link and reached a linguisten.de page. But I like to know where what I'm reading comes from, and linguisten.de is really a portal; in their page was this link, to an elearning page that made this eyebrow-raising claim:


Barbara Malt, professor of psychology and director of the Cognitive Science Program at Lehigh University explains: “The idea that language moves from describing concrete phenomena to abstract ideas has been around for a few decades. But, nobody has taken that idea and looked at how word meanings have evolved over time – until now.”

Hmm. Concrete to abstract: then what about Ttaanic? Think about it:

In this case abstract and concrete applications dance a minuet with each other, now one thing, now the other, and back again. Admittedly, though,. concrete -> abstract is the more common direction of travel. But the words ...nobody has taken that idea and looked at how word meanings have evolved over time – until now. got my goat rather – especially the last breathless bit. The idea of a systematic mapping of how metaphors are formed is new, but the idea that "looking at" meaning development is new is just risible: 19th-century philologers were doing it, in a piecemeal and anecdotal way.

Anyway, returning to that hyperlink-enabled paperchase: At last, I thought, I was getting somewhere. But man proposes and the Interweb disposes. At the end of a paragraph or two of press release there was yet another link, to this EurekSlert page. My quest was over: from...


How a word becomes a metaphor, new research , Lehigh University

...I had reached an article entitled


Analysis sheds light on how metaphors like 'sheds light' evolved

Oddly, though, the ultimate (?) source had the jokier title (a misleading one, as it happens, but a gag's a gag). This should  have warned me that my quest was not finished;  not by a long chalk. (Interesting, that; why not a short chalk) The EurekAlert piece said this:


...New word meanings come about when there's a need to express something new," says Barbara Malt, professor of psychology and director of the Cognitive Science Program at Lehigh University. "For instance, the original meaning of the word 'grasp' only described holding something physically. Later, 'grasp' also came to mean holding something in a metaphorical sense, such as 'grasping an idea.'"

Is this crossing-over from one realm of meaning to another random? Or does it follow a pattern?I

...The... findings will be published in an article in a forthcoming issue of Cognitive Psychology called: "Evolution of word meanings through metaphorical mapping: Systematicity over the past millennium."...

The article is on a ScienceDirect site, where (of course) you can only read an Abstract of


Evolution of word meanings through metaphorical mapping: Systematicity over the past millennium

The next stage involves my enriching the coffers of Elsevier, which ain't gonna happen: here are Highlights, as advertised there:

So where has this daisychain of hyperlinks led us? The fabled infinite number of monkeys now have more than just a typewriter; they have  an infinite number of photocopiers. And it's getting increasingly hard to screen out the white noise of cloned bumf.