On 25 July 2000 Air France Flight 4590  crashed in Paris. At the time both my children were there (not at Charles de Gaulle airport, silly...) on a joint tour of two local choirs (possibly three, but I only had a paternal interest in two of them:  Berkshire Youth Choir "BYC" and  Berkshire Girls' Choir ["BGC"]). BGC, the younger choir, came home earlier.  But when BYC came back BGC joined them for a homecoming concert in Winchester Cathedral.

BYC was in its heyday at the time. (Gillian Dibden, their MD at  the time, wrote about them in Airs and Places [a locally-funded compendium of short pieces about music in Berkshire], but the piece is rather dated, and I can't find a quote that wouldn't involve yards of footnotes about local admin.) When they won the Sainsbury's Choir of the Year in 2002, Howard Goodall, judging, was to call them "the Manchester United of junior choirs". A very young (sixteen?) Sophie Bevan sang a solo and filled the cathedral with her assured, confident, and eerily mature voice. Her sister Mary was also in the choir. The joint choirs sang Parry's I Was Glad at the end, in a rendition that I've never heard bettered.


Exactly eighseventeen years to the day later, on 29 July 20187, my own choir – Wokingham Choral Society – will be singing in the same cathedral; that is, a self-selecting but goodly and well-balanced minority.  That self-selecting is significant. The ability to find time for an extra-curricular event like this bespeaks both commitment and enthusiasm; and, sadly, money.

In June 2017 Voices Now produced a survey of choral singing in the UK. Here's a taste:

The census estimates (conservatively) that over 2 million people sing regularly across the UK. This is similar to the number of Britons who go swimming on a weekly basis, and 300,00010 more than those playing amateur football each week.11 However these two sports receive considerable public funding, in part because of the widely recognised benefits of regular12 sports practice for mental and physical well-being and their role in local communities.

Aha – but sport has physical and psychological benefits. Doesn't that explain the difference in government support? The Voices Now survey again:

Professor Graham Welch, Chair of Music Education at the Institute of Education, University of London, found that the health benefits of singing are both physical and psychological. “Singing has physical benefits because it is anaerobic activity that increases oxygenation in the blood stream and exercises major muscle groups in the upperbody, even when sitting. Singing has psychological benefits because of its normally positive effect in reducing stress levels.

Psychological benefits are also evident because of the increased sense of community, belonging and shared endeavour.

And Professor Welch is far from alone. The report cites experts from a range of disciplines.

Meanwhile, an MIPRO article has reported on the horrific effect of the EBacc on music in schools.

I can't help  feeling that the UK has some seriously mistaken priorities, particularly with regard to music.  The rot has been spreading for years. As early as 1999, in Airs and Places, I wrote:

Sometimes I think choral singing is a dying tradition. When I joined the Reading Haydn Choir I was, in my late thirties, one of the younger members. Even now, ten years later, I am far from being one of the older members. But I hope I'm wrong.... Perhaps our children will bring new blood to the  many  ageing choirs out there....

But if our children are starved of music in school, what hope is there?

So come and hear what may be the last of a dying breed :-) 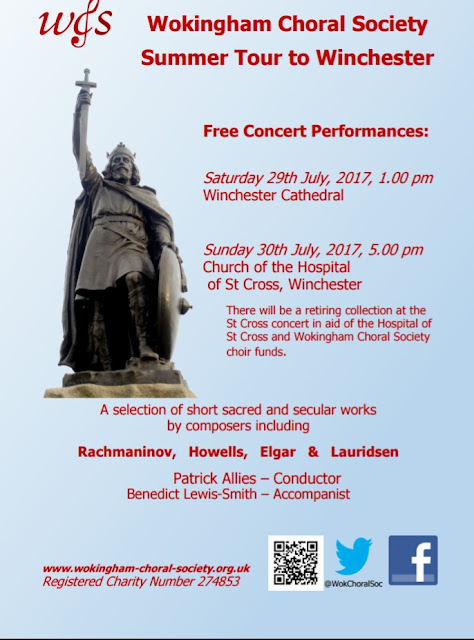