Putting the emPHAsis on the wrong sylLABle


My attention was caught the other day, for a number of reasons, by this tweet: 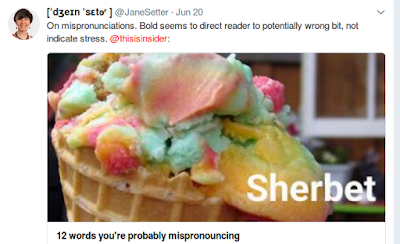 Chief among my reasons was that I can't see a rule without wanting to break it or prove it wrong.

<autobiographical_note>
A simple example is the new paper-towel dispenser where my choir rehearses. The instructions end Pull down with both hands. When I'm alone (natch – I'm not that badly house-trained) I take great pains – and it's not easy – to do it with only one hand.
</autobiographical_note>

Another reason was that I didn't understand the tweet (without the context of reading the article – which I didn't have time to do). But I have since read the article and all is – relatively, considering the quality of the article (not a gem, in the Clarity Stakes) – clear.

The link was to a Business Insider article (my quotations are all from this article, but I can't be bothered to be my normal linkorrhoeic self) presented on a secondary site. So I clicked through to the original: before charging at it like a bull at a gate I should make sure  the advice was coming from the horse's mouth, at the risk mixing my metaphors.

That picture of some sort of water-ice was followed by the echolalic (is that a word? Well it is now) question

To which my answer would probably be, I thought:

But, more to the point, who was the you in their question? What is Business Insider's target readership? From the title I had guessed that it was some sort of business journal; but the tone of the article suggested that it was an ESOL resource, for use in what is unfortunately known as GBE (General Business English).

And it goes on:

But if the target audience was ESOL students, my feelings of affront and assumed condescension were  hardly appropriate.

There were 12 key words, rather than the promised 11. Some early reader had presumably pointed out that 11 was an oddly arbitrary number, and you can chalk one more up for deadline-pressure.

Two of the words discussed (comptroller and supposedly) had nothing to do with stress; come to that, it's not easy to discern what they did have to do with. As a native speaker of English, I have never knowingly used the word comptroller. If this is a teaching resource, the students have my sympathy.

Other key words dealt with mispronunciations that I have never heard, such as


<rant type="Is it worth repeating? You must be as bored of hearing it as I am of saying it.">
The usual. These "sounds like" 'transcriptions' do more harm than good. The arguments against teaching and using the tiny subset of IPA characters needed for teaching English are either trivial or vacuous or both. (One of the fuller rants is here.)


And some of the words are only incidentally involved in getting stress wrong:
This, for example, misses a trick:

The extra syllable doesn't happen because of the faulty stress. I  imagine it happens by false analogy with words such as devious (and other less similar-sounding -<glide>ous words such as impervious or extraneous).

But maybe I'm wronging the article by assuming that the focus is stress.  It just says mispronunciation; and I'm only obsessing about stress because of the original tweeter's confusion. Incidentally, I originally thought the problem was just AE vs BE: the standard AE stress on sorbet is on the second syllable, so bold does mark stress in this:


Many say "sher-bert," though there's no second "r" — not even a silent one. It's not to be confused with "sorbet" (sor-bay)

It's not so clear with this though:


Most people add an extra syllable to this word. It is pronounced "tri-ath-lon" not "tri-ath-a-lon."?

Does anyone add an extra syllable like this? It's reminiscent of the childish interpolation of extra vowels to avoid tricky consonant clusters, but I've never heard any UK adult do it. And in any case, does anyone NOT stress the second syllable in that word? (I'm drawn to AE/BE explanations because the website in question is registered in Scottsdale, Arizona.)

Anyway, the bottom line: the article strikes me as slapdash and ill-thought-out. If it's meant for ESOL students, they deserve better. If it's meant for anyone else, I can't imagine what they'd get out of it or why they'd read it.