Just before 9.00 on 2  June 2017, James Conwyn M P tweeted this, shortly before thinking Tweet in haste, repent at leisure. There had been over a thousand retweets before (as I imagineud) it was taken down. 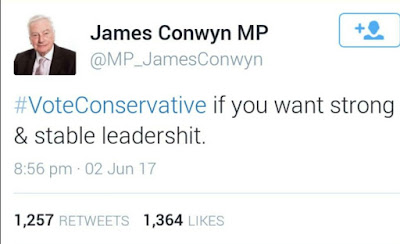 But the genie was out of the bottle. By midday, there had been well over 3,000 retweets.

Why did this happen? The Freudian slip theory. that he recognised Tory shortcomings and subconsciously wanted to "tell the truth", doesn‘t hold water (*KLAXON* Mixed metaphor alert: What kind of permeable bottle was this genie in?) Conwyn just wouldn‘t talk this way, whatever truths his id wanted him to  admit to.

So was it a simple typo? Unlikely. If he‘s right-handed and a one-finger typist (fairly safe assumptions for a late middle-aged male WASP in the Conservative hive) typing a T takes much more effort than typing a P.

I favour a psycho-phonological explanation: what makes the strong and stable jingle so memorable is the alliteration of the cluster /st/. If the tip of the tongue is accustomed to hitting the back of the upper gums once per  stressed word, the temptation will be to do the same even when the jingle has finished being uttered. Hunt-and-peck typists vocalize the words they type. So the /p/ dissimilates to /t/ in the typist's voice and this change interferes with the fingers.

<digression type="Aha but...">
In my efforts to find out more about Conwyn, I met this unexpected impasse: 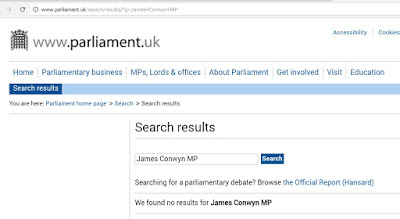 So who is it with egg on
their face? A real Tory MP
or thousands of left-wing retweeters of a piece of fake news?


(Or me for overestimating the accuracy of the parliament.co.uk website?)

ud My suspicion, entertained in that digression, has been confirmed. In a message I overlooked in late June, I've just read this in a private message:


There is no James Conwyn MP, and the picture shown is of my client, Sir Malcolm Williamson.

I'm not going to reveal my correspondent's name, as I don't know whether they want it made known. But it confirms my suspicion that the tweet was what would have been called by SOE "black propaganda", by modern commentators "fake news", or even more trendily "click-bait".

RT in haste. Repent at leisure.

PS: And here are a couple of clues: