For the last few months – years, actually, but months with respect to this blog – I've been prey to self-doubt; I thought I was losing it. So it was with some relief the other day that I noticed the presence of two recent pieces in the "All-time" top-ten (that's what they call it at Blogger [omitting   the hyphen, of course, in the best tradition of Strunk & White], though I have an automatic lip-curl response to the word all-time, which seems to me to debase the currency [rather like a phrase I noticed in a recent ad for beds: "Have a great night's sleep". I wouldn't call that use of the word , erm, GENIUS.]): 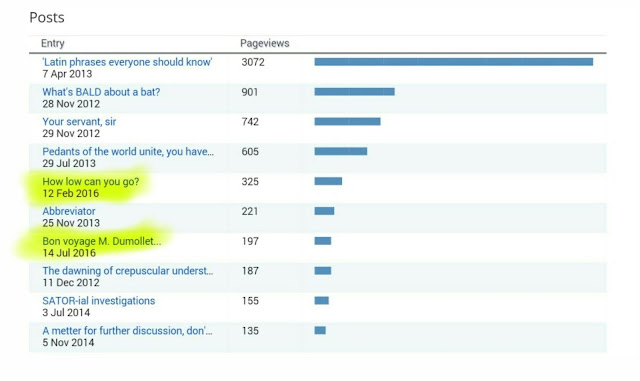 Top-of-the-shop is an old piece about Latin; I've never been able to work out why this one is so popular – more than 3 times as frequently visited as any other. It must be linked to from some (or several?) influential sites; or perhaps some MOOC links to it. The next 3 or 4 are all at least 3 years old. But at 5 and 7 are two recent offerings  – the most recent being a reflection on the irony of Argentina's response to the colonial name "FALKLAND ISLANDS" by insisting on a name based on a much earlier instance of colonialism. 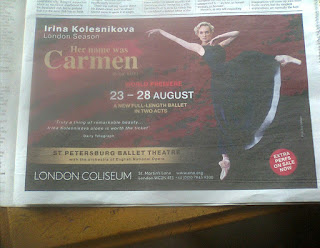 I was leafing through this week's The Times on Saturday when my eye was caught by an advertisement for the new ballet based on Carmen:

And rather than make the obvious assumption that the designer had chosen red as the main colour for its association with blood and lust and bull-fighting I wondered if the pun on carmine was relevant. And from that idle (some would say pathological – or at least wild) surmise (see what he did there?) I progressed to the further speculation about a possible (PRO TEM – but read on) connection between red and carmina (Latin, = songs).

By chance this further speculation was reinforced by another ad: 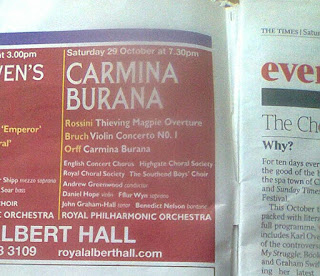 red again – was I on the track of something thingish? Well ...NO. Sorry to disappoint, but some madcap seeds fall on stony ground, and no amount of John Innes No. 2 is going to save this one.

Spanish is graced by many seemingly oddball girls'  names such as Sorrows (dolores) or Pillar (pilar). They are all epithets attached to Mary: Nuestra Señora del Pilar for example (a sort of early Christian stylite). The name Carmen is an abbreviation of María del Carmen.

So the colour of those two ads has nothing to do with carmine, which is derived (ultimately) from the Arabic qirmiz:

1712, originally of the dyestuff, from French carmin (12c.), from Medieval Latin carminium, from Arabic qirmiz "crimson" (see kermes). Form influenced in Latin by minium "red lead, cinnabar," a word said to be of Iberian origin. As an adjective from 1737; as a color name from 1799.

[From Etymonline. That link to kermes is well worth pursuing, if you have a spare minute.]


<autobiographical_note>
But before I go I must just record a (vanishingly small) victory. A recent edition of Great Lives started with Matthew Parris asking 'Why hadn't I heard of him before?' Well I had, by chance. During my brief stay at OUP in and around 1980, my friend and mentor Richard Brain (sadly no longer with us) edited a book about the extraordinary Muir of Huntershill, and as his assistant I had some dealings with it (not as many as I should have, as Richard – for all his many talents – was not terribly good at delegating, but the author was a personal friend).
</autobiographical_note>

PS I was brushing this post up, in preparation for an update, when I realized that the history of this blog was rebooted when I discovered the MFL Teachers' Lounge and started  recycling earlier posts that dealt with language. So whereas I had been heartened by the fact that two relatively recent (recent at the time, that is) posts had already made it into Blogger's "All-time" stats, the story now is heartening for a different reason.

In this chart, there are three pieces all written since the time of the original post; theses are marked as Brand new.  But three older pieces, boosted by the MTL (MFL Teachers' Lounge) Effect, are new arrivals. And one of the two new pieces I'd previously hailed as a Promising Newcomer has been left in the dust (and fallen out of the top ten because 325 just doesn't register any more): 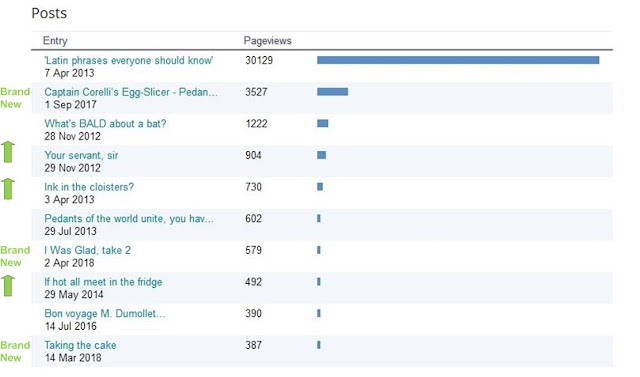 PPS – The answers: JARGONELLE and CONFITURE