Getting my retraction in first
I  know I know. I made the same mistake I was analysing. The YouTube  thing is fine. The Jobim song doesn't mention the Pão de Açúcar at all. I've left the text as-is rather than unpick it all.

The Hunchback (Corcovado, Rio de Janeiro) is sometimes called Monte Cristo (although the statue of Cristo Redentor is not on the hunch itself – assuming, as I do, that the hunch is the eminence just over half-way up). 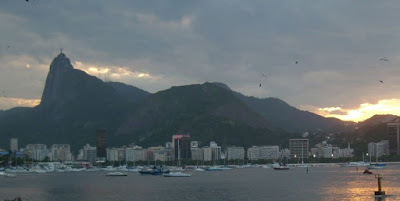 For reasons that aren't entirely clear to me, Wikipedia says that Corcovado is sometimes confused with nearby Sugarloaf Mountain. Evidence of this confusion  – which I admit I thought unlikely when I read it  –  is provided by this YouTube clip, which has this image for a performance of the Jobim song Corcovado (sung here by Nara Leão): 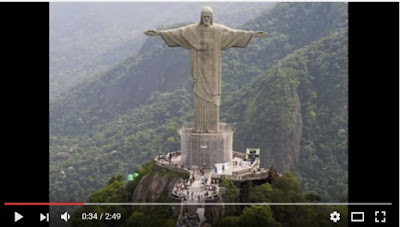 A possible explanation of this confusion is the song's lines

It's a list of what the reflective guitarist sees from the window (da janela). The view must include both Corcovado and Sugarloaf Mountain (as does the photo below  – although the singer would have had to be on a ship to get this view).

When I first came across this name I assumed that it referred to some kind of Brazilian pastel. It was only much later, when I was visiting a National Trust kitchen, that I saw a real sugarloaf. As Elizabeth David explains in English Bread and Yeast Cookery


Households bought their white sugar in tall. conical loaves, from which pieces were broken off with special iron sugar-cutters (sugar nips). Shaped something like very large heavy pliers with sharp blades attached to the cutting sides, these cutters had to be strong and tough, because the loaves were large, about 14 inches (36 cm) in diameter at the base, and 3 feet (0.91 m) [15th century]

So that other mountain dominating the Rio skyline is well-named; Sugarloaf  (a name that is used for various mountains all over the world) could be added to my list of culinary metaphors.
So much for Brazil.

But before I sign off, here are a couple of  statistical pictures, relating to the popularity of this blog – Citius, Altius, Fortius [Quicker, higher, stronger*]  (which is about as close as this post is going to get to the the Olympics

). Before my choral tour 10 days ago, visits for the first three weeks of July amounted to just over 700; they looked to be heading for a monthly total of about 900. For the last few days, though, the average has been over 100, giving a monthly total of nearly 2000 (a record). Hardly viral, but quite satisfactory

But before I get too excited by this rise, I've collected  the data for this graph, showing quarterly totals, which show more of a plateau: 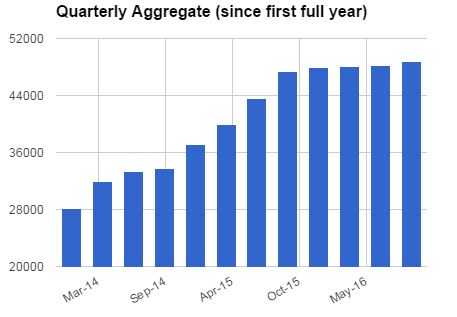 * Possibly there may still be people who would prefer it if the translation reflected the comparative adverbs: more quickly, more highly, more strongly. The synthetic comparative adverb (with an ending simply added to a stem) did not make it into Vulgar Latin. If you're interested in the way Vulgar Latin created an analytic one, by compounding a feminine adverbjective (of course) with -mente ("in that state of mind"), I tell the tale here.