When my family was in Rome in the Summer of 1961, we went to a presentation that my parents, for some reason unknown to me at the time, referred to as Son et Lumière; why French?, I wondered  (or rather, as I was in only my tenth year, why not Suoni e Luci as the posters said? Why not, indeed, the rather pedestrian Sound and Light? (though what was the point of that  for pity's sake [as Auntie Katy might have said in a moment of extreme confusion])?

For a 9⅞-year-old it was pretty tedious stuff anyway. The only lasting impression it made on me was the recurrent Senatus Populus[Q]ue Romanus booming out every few minutes. Otherwise it was just some words, accompanied more-or-less randomly by floodlights picking out bits of ruined Forum; I wasn't paying enough attention to make the link between the commentary and the lit ruins. How did they dare to charge for what anyone could see just as well in daylight? (And an additional point of interest was the actual lights, which you couldn't see in the dark. Even then I was more interested in causes than in effects)

But this tangent from an accidental pun in the subject line is pushing it – even for me.

But coming to the point (if that's the word for my latest TEZZY nomination [Time-Wasting Site of the Year]): researchers at "Cambridge and Oxford" ...

(as the article says, though I suspect most native speakers of English would reverse that order [perhaps the provenance of the article, http://www.cam.ac.uk/, had something to do with it...?])

...have done (or have convinced themselves they have done) something that generations of philologists have dreamed about).

Clicking back from link to link I find  that the announcement is old news: 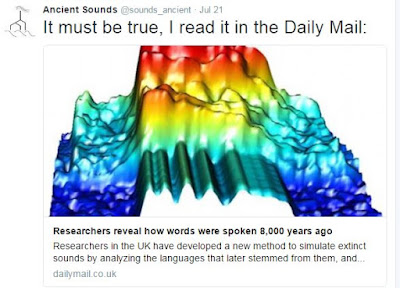 But in my defence  I was getting ready for my choir's tour, mentioned here; so it was only last week that a Cambridge Research paper first caught my eye:


... [R]esearchers have recreated what they claim is the mother tongue of one of the largest group of languages spoken around the world - the Indo-European languages.

...However, as no texts exist from the time, linguists have struggled to reconstruct this original language and the way it sounds remained a mystery.

The researchers have now recreated it

Recreated PIE? Of  course they haven't, and only a fool would believe they either had done or had claimed to have done.

But in fact I find it hard to work  out what they have done. The examples they have collected on another site show "progressions" from one language to another, as if French had, in some sense. "MORPHED INTO" Italian (an extravagantly silly idea). And there is my old bugbear, the widespread assumption that Portuguese tout sec (rather than Brazilian Portuguese) is what they speak everywhere that Portuguese is spoken.

Here are some of the paths (???) they track:
That's the way it's pronounced in Brasil.

And can they really believe that vernacular speakers in Gaul waited for Iberians to demonstrate how to mispronounce Latin, remaining tongue-tied until about the seventh century AD? Indeed, there are even greater anachronisticals at work in that last bullet: French grew into Brazilian Portuguese, by-passing the Iberian version (which derived from Spanish according to the previous bullet), even though a Latin-based vernacular in Portugal had at least two centuries' start on Spanish because of the pattern of the Reconquest).

I suspect the researchers have been seduced into playing with some clever tech and just churning out "examples"  – which they would know better than to produce if they had studied a bit of philology. But before I risk venturing any further into the I'llEatMyHat zone I'd better read the accompanying papers (which I've only just found). Stay tuned for an update.

I've looked at one of the papers (sorry, PDF). The Abstract reads:

The process of change, particularly understanding the historical and geographical spread, from older to modern languages has long been studied from the point of view of textual changes and phonetic transcriptions. However, it is somewhat more difficult to analyze these from an acoustic point of view, ...

...although this is likely to be the dominant method of transmission rather than through written records.

Of course it was. Has any philologist ever suggested it wasn't. Texts are no more than clues to what sounds were happening at the time.

Here, we propose a novel approach to the analysis of acoustic phonetic data, where the aim will be to model statistically speech sounds. In particular, we explore phonetic variation and change using a time-frequency representation, namely the log-spectrograms of speech recordings....

At this point they lose me – going off into statistical analysis, and talking about log-spectrograms. When I first saw the (very impressive) picture that is, of course, front-and-centre in that Daily Mail article I was confused*. The spectrograms I had met in Cambridge in the early '70s were all two-dimensional. I wondered where the third dimension came from. That prefixed log- must be a clue. The third dimension is supplied by something statistical.

Having no grounding in statistics, I'm not qualified to criticize, however much I'm inclined to. The authors of the paper are widespread:

I imagine this made for communications problems. And three of the four are statisticians. I suspect that this may have hampered the philological input. I suppose the philologist did originate some of the text. But I doubt very much that he wrote the abstract, which even I can see is philologically naïve.

These sound files are fun to play with, but I'm not convinced they're of any use to philology.

* Just checking to see if you were awake.
Posted by @BobKLite at 22:15