Earlier this week, on the first of Robert McCrum's Shakespeare and the American Dream  (well worth a listen), the presenter allowed through a reference that didn't work, at first sight (hmm... on first hearing), on radio but was repaired by the context (eventually). But I didn't need that contextual clue, as I know Robert. He was interviewing James Shapiro about the importance of Shakespeare to the USA, and Shapiro described a temporary army posting in the 1840s, where to  maintain morale in a hole (I think that was the word Shapiro used) ...


<digression>
in Corpus Christi, Texas (which shares its name, coincidentally, with the place where I met (and was directed by in a stage version of Alice in Wonderland) the aforementioned interviewer
</digression>

... the army diverted themselves by putting on a production of Othello (a fairly bold choice, in Texas at  that time). The original casting of the soldier playing Desdemona was obviously ridiculous, said Shapiro. "He was your size – too big to play Desdemona." The replacement for the part was a young Ulysses S. Grant.

I made a note of this, meaning at some stage to write about this sort of cultural metaphor, but the only other example that came to mind at the time was Verdi's Nabucco, with its Hebrew Slaves chafing at their subjugation  – famously echoing the feeling of the Italian peoples (there being no country of that name at the time, except when used as "a geographical expression"  [Metternich, I think: Wikipedia would know]). Instead of Va pensiero sull' alle dorati (that chorus) the Italian nationalists could proclaim Viva VERDI (privately [and subversively] knowing that the composer's name was an acronym for Vittorio Emanuele, Rei D' Italia). (This is covered in the English Wikipedia entry for the composer; but in the Italian version there is a whole article (admittedly not a  long one) dedicated just to this phrase: Viva Verdi.)

But the very next day, on Midweek, I heard Daniel Evans talking about how his work on The Full Monty in Sheffield (losing its steel-based industries with associated unemployment and social disruption) was  redolent of what happened to the Rhondda when he was a boy. His latest venture, Showboat is itself a piece that opened people's eyes to an issue that at the time (of its first performance) was not discussed in polite society. And it went straight for the jugular, in the first word. It's a word that is one of the last taboos, timorously hiding behind its initial. In later versions it was attenuated (to "Darkies all work on the Mississippi" I think) and when Francis Albert covered it he sang "HERE we all work...". Oscar Hammerstein, someone mentioned on this morning's programme, was using Showboat to investigate his own feelings about racial tensions and miscegenation.

I seem to remember, from background information picked up during my A-level exposure to L'Etranger, that Camus'  La Peste was really about Vichy France, the body politic being infected by Nazism. In fact it's generally true that opposition to repressive/totalitarian regimes is not infrequently expressed through works of art that use this sort of cultural metaphor. And the more I think about it the more examples spring to mind. But it's late and I must get this Out There while it's still hot (and before I think of any more).

b
PS Here are a couple more clues:

Six-footers and over involving last of many quantity surveyors (8)

PS A striking part of the McCrum programme was the statement that American  readers regarded Shakespeare as belonging in some way to them, whereas over here we think he's ours  – though I should tread carefully here, given these Blogger stats for visits to this blog: the lower extract shows all-time visits, and the one on the right shows visits in the last month – suggesting a pretty constant 3:1 bias: 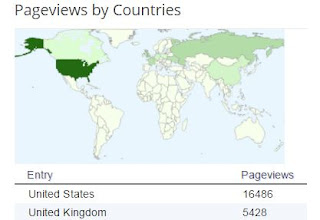 This is a point that David Crystal makes in his Oxford Dictionary of Original Shakespearean Pronunciation:

The forms of English spoken around the world often include traces of regional and/or dialectal morphology, phonology, lexis – all that good stuff – of the British-born speakers who emigrated hundreds of years ago.  As the note to that Crystal extract says:

This PPS has been for the most part a digression, so I'll wrench it back to my main point (about cultural  metaphors). It's not just Othello and race that is particularly relevant in the USA. Internecine conflict (that's Civil War in Newspeak) make all the "Wars of the Roses" plays apt. Besides, we are talking about  myriad-minded man (Coleridge I think, but showing off his Greek) so all Shakespeare's output is relevant. But OP makes it more so. 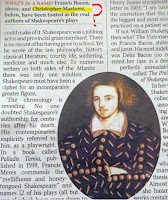 PPPS It is ironic that an article in today's Times, dealing with misattribution conspiracies, participated – in an off-hand and unknowing way – in a related misattribution. A caption to two pictures of people who've had Shakespeare's works attributed to them referred to THAT portrait of "Marlowe" (cropped so as to hide the writing that points the finger of blame).

The Pseudo-Marlowe portrait:
a wish fulfilled

In an article with that title , published posthumously in The Letter (published annually by Corpus Christi College, Cambridge – No. 93) the late Professor Oliver Rackham wrote: 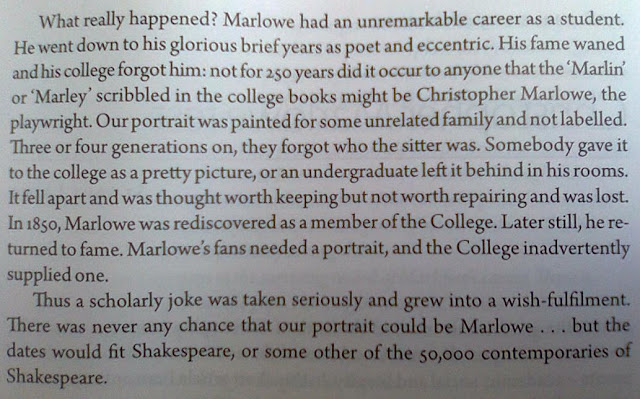 I'm tempted to observe, in the words of some Elizabethan hack


Oh what a tangled web we weave...