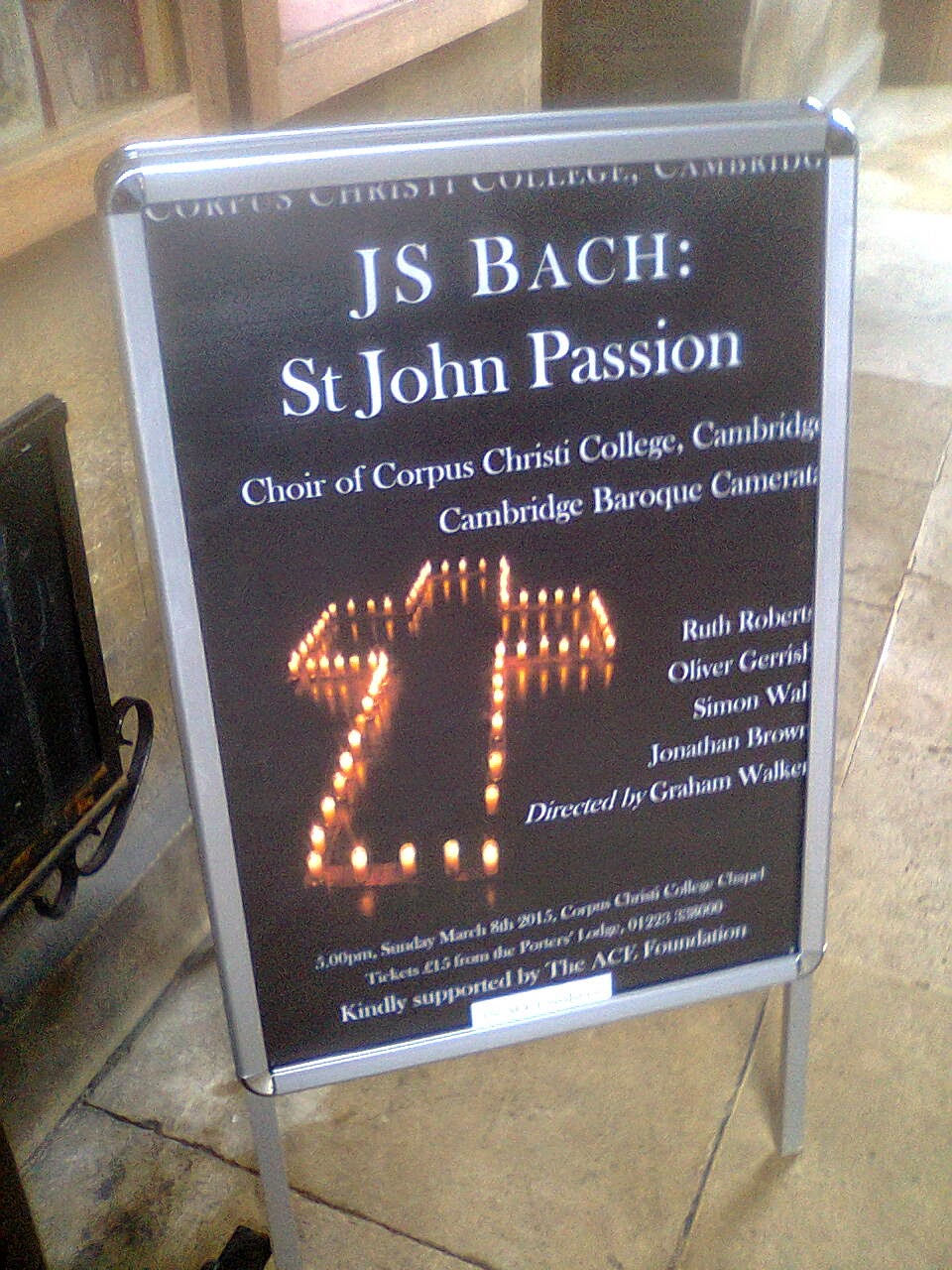 I took advantage last Sunday of an invitation to sing as an alumnus at a concert of possibly the greatest musical retelling of a story we all know well – some better than others.

In my youth I spent many an hour standing through readings  on Palm Sunday and on Good Friday (dramatized readings on that day, to the extent of having separate voices for the Evangelist, Jesus, Pilate, Peter et al., but without Bach's extraordinary music).

And between rehearsals I went down to the Fitzwilliam Museum to see Those Bronzes. I can't say I was deeply impressed. The anatomical detail of the nude riders was impeccable, though the anatomical detail of the panthers was  no better than could be expected of an early 16th century European sculptor. And the mechanical/dynamic details were frankly extraordinary (in a bad way). The riders' backsides were hovering improbably about a hand's breadth (scaling up by a factor of 3 or 4,  as the bronzes were surprisingly small) from their steeds' backs. There were two possible explanations: the riders, supported, apparently, chiefly at knee-level, had remarkably (improbably?) strong thighs; or the sculptor was (wrongly) assuming a horse-like trotting gait (rather than a feline one) – with the riders effectively in mid-air. 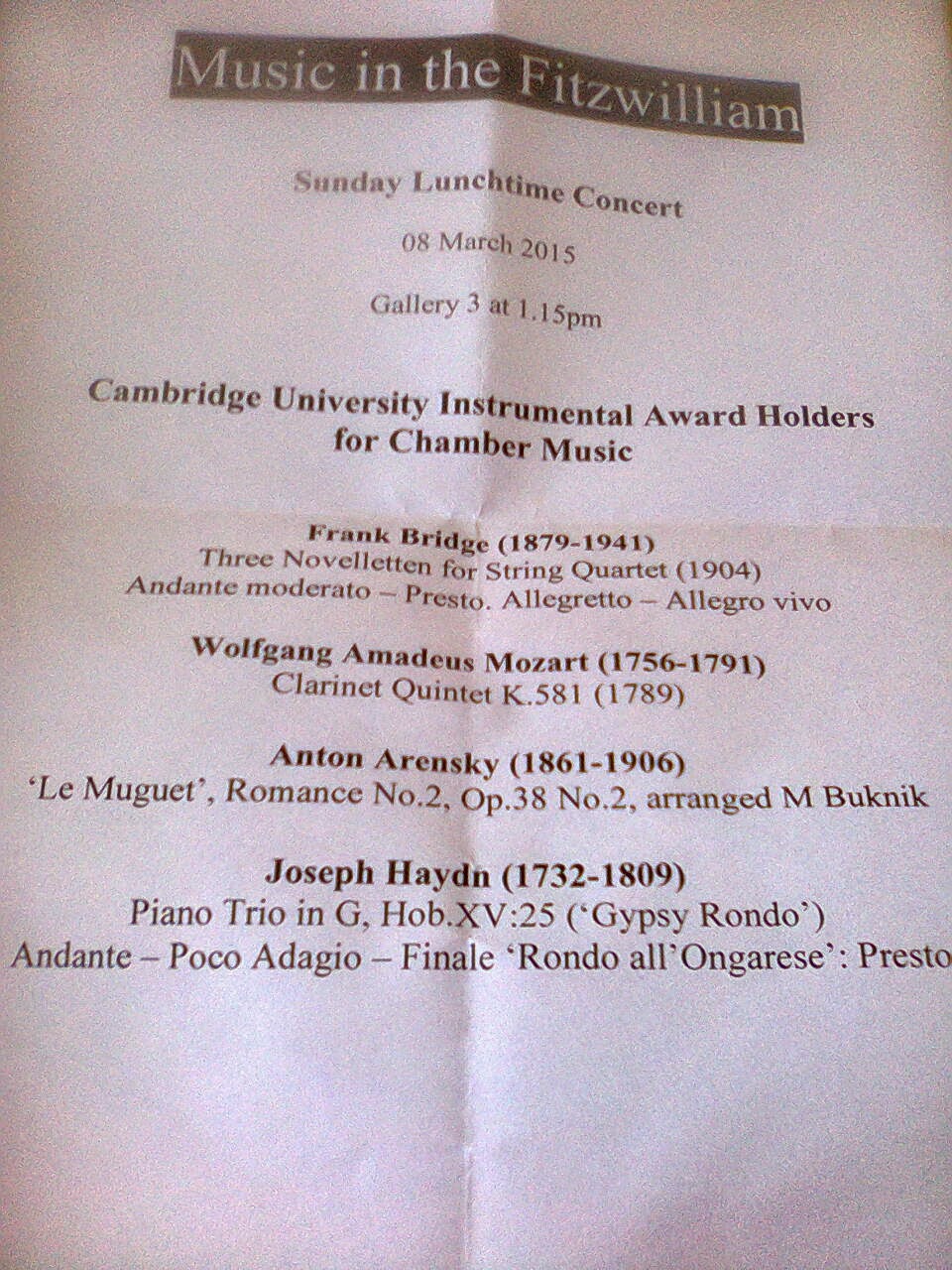 My visit to the Fitzwilliam  was accidentally (and charmingly) prolonged by a Music in the Fitzwilliam lunchtime concert.  [That  link doesn't cover the Chamber Music recital I stumbled upon (quietly).]

So I was a few minutes late for the afternoon rehearsal.

The concert itself was good, though I could have done better – as I had sung the piece with two other choirs I thought I knew it better than I did. But the music was beautiful, and Knowles-proof. And I was amazed, as usual by the drama of Bach's word-painting.

Beethoven's pun came to mind as I listened to the recit before Peter's Ach, mein Seelinn, with its excruciating chromatic keening – a mixture of grief, fear, and self-pity. Not long afterwards the dramatic writing is no less oceanic when the veil of the Temple is rent 'from top to bottom' [cascade of  little black notes] and 'the earth did quake' [another three bars of frenetic black notes], until an uneasy peace is restored when 'many bodies of saints arose'.


The concert was followed by dinner and drinks. (I transpired to be less resilient than I had been 40 years ago, and retired at tennish.)

My room was in a part of the college that I had last visited in my post-graduate year, as my Supervisor† had rooms on P Staircase. I was disappointed in the morning  to find that breakfast was not, as billed, served in Hall, but in the Bar – which was decorated with a poster taken from the College Archives. It was a May Week production of Tamburlane the Great, which I thought I recognized as one I had seen in 1972.

So  those prices must have pre-dated my matriculation. Besides, I now realize, the time of year was wrong. The production I saw was the Fresher's Production – done in the Michaelmas Term of my second year. The fresher producing it was one Robert McCrum, and it was, to say the least, a confusing event. It was done on a typical student shoe-string budget, and in modern dress. The cast of thous... [well, probably 20-30, there were only 60-odd in the undergraduate cohort ] were clothed from their own wardrobes, and the design concept was that the two armies had distinctly coloured sweaters – brown and green. But of course the Browns ranged from dark chocolate to khaki, and the Greens  ranged from British Racing Green to ... khaki.‡ So there was a good deal of crossover.

Returning to the Bar and the poster, it featured a caricature of the 'Marlowe' portrait;

and as it happened at dinner I was sitting next to the man who wrote an article (or completed it on behalf of the named author) in my Alumnus organ 'the Association Letter' last year, ) pooh-poohing the identification. In fact, some of the browsing and sluicing (not mine, that phrase, Wodehouse's) took place in a room where that  painting was hung – a neat coincidence.

I wrote some time ago here and here about the Corpus Chronophage. I failed, then, to mention a reminiscence that came to mind again this weekend:


<digression>
A few years ago I was in Cambridge, and missed a trick. I was at the front of the crowdlet in front of the Chronophage, and a tourist behind  me wondered aloud what the inscription meant:

It took me a while to work it out, as two of the less obvious words (everything except transit, et and ejus) had glyphs that hid the letters un and en behind the conventional stone mason's tilde, giving û and ê. But what it says could be rendered as The world passes, as does its concupiscence. (I think the comma justifies my as does).

<meta_digression type="autobiographical">
Some might prefer greed or avarice. But my sixth-form form tutor, for whom the word cadaverous might have been invented, insisted that what 'concupiscence' meant in Canon Law (his focus at the time) was not just greed or avarice but the tendency to want that which you know you shouldn't indulge in. So that mundus tag could be rendered more pithily (in the words  of an anonymous 18th century suicide note) as All this buttoning and  unbuttoning.</meta_digression>

My opportunity was to contribute to The Cambridge Experience for these tourists, suggesting that around every corner there lurked a Vulgar Latinist. But by the time I'd worked it out, the moment had passed. So here it is now: talk about Esprit d'escalier – more like Esprit du plus ténu souvenir.
</digression>


Enough of this; back to that mundum . And more word-hacking.

† In fact he was also my Director of Studies, though I had chiefly social contact with him during my undergraduate years, as most of my supervisions happened outside College. He supervised my postgraduate year.

Update 2015.03.10.17:10 – Added this note, correcting a faulty memory:
‡This, as I have been reminded by an erstwhile fellow chorister (who didn't sing on Sunday as he was otherwise engaged running), is rubbish(!) My memory derailed itself; and wronged both Robert McCrum (1972) and Howard Goodison (1971), producers of two different freshers' productions. The brown/green jumpers belonged to the previous year's play  –  Troilus.