This comes with the cachet (or should that be caché?) of the saundz.com stable, so presumably one should pay it some heed. I have to say, though, that whenever – in the past – I have looked at their site for purposes of preparing a lesson I found that it was (intentionally, I suppose) heavily, if not entirely biased in favour of American English. OK, that makes sense. There are many more native speakers of American English than of British English, and students of ESOL usually want to learn American English in preference to British English; or else they don't care either way.

A few counter-examples from the rule as stated there – one for each word:
Of course I'm ignoring (or at  least overlooking) context – not the context surrounding the situations in the examples, but the context of the lesson itself; the rule is given to students who just haven't met any other tense than the present, so that it is implicitly preceded by the words WHEN ANY OF  THESE WORDS IS FOLLOWED BY A VERB IN THE PRESENT...


But even so,  there must be a typo in the opening sentence (unless this is a bit of American English syntax that I haven't met). State verbs are usually used

with [THE – does the writer have difficulty with articles?] Present Simple instead [OF, surely...?] with [THE ...?] Present Continuous

And the lack of articles can't be blamed on "typographical  licence" – the  last two lines in that four-line extract (the exhibit I started with) are plenty loose enough to accommodate a few extra characters.

Besides, only a few days' exposure to the Western world is going to expose students to the infamous I'm lovin' it (which vies with 10 items or less for the
Most egregious tweaker of Grammar Nazis' chains
award). This really does break not only the spirit but also the letter of the law (Present Continuous rather than Present Simple). But students will quickly realize that rules are not so much made to be broken, in the words of that tired cliché...


<digression>
Isn't TIRED CLICHÉ itself one of those ... erm, THREADBARE commonplaces?
</digression>

... as defined by actual usage. The repeated failures of practice to match up with theory have to be accommodated by weasel words like that USUALLY.

b
PS As I write I have the BBC‘s Julius Caesar in the background; and the line Who is it in the press that calls on me leapt out at me with its two anachronistic puns: press and call on. And this reminded me of a recurrent annoyance, apparently irrelevant but similarly depending on an anachronistic pun sadly repeated ever and anon (is that Shakespeare?) by people who should know better: the roots of OMG:


This one’s for all you amateur internet archaeologists out there: The first recorded use of the ubiquitous texting abbreviation OMG wasn’t uttered by a precocious tween in the 1990s, but by one Lord Fisher in a letter to none other than Winston Churchill.

Well well; silly us! There‘s everyone thinking that abbreviation's a child of the late 20th Century. How wrong we were! Umm,  no. Lord Fisher‘s "OMG" was a joke based on the names of honours such as "OBE" and "CMG". Here's the context: 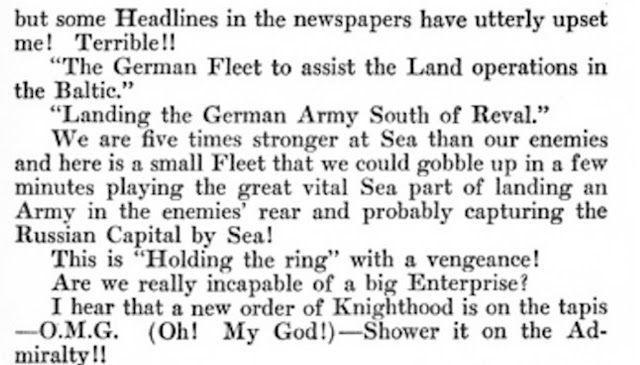 To cite it as the etymological basis of the SMS-based abbreviation "OMG" is to indulge in an anachronistic pun – the sort of textual "discovery" that is increasingly common in these days of easily accessed electronic text  databases. In the words of that prescient ophthalmologist Friar Lawrence


What a pair of spectacles is this?

PPS And here‘s a clue: