Today's  area of interest is stress,  which I've looked at several times already – here and here, for example, but the word cloud in the right margin will guide you to others. This time, though I want to look in particular at stress as it relates to tone.

When a linguist hears the word tone they automatically think of Chinese (or, if they have some background in more exotic languages, some other language that uses tones to make semantic distinctions). I (like most Eurocentric linguists, I imagine) think of Mandarin Chinese, because that's the most widely-spoken tonal language.

And I imagine everyone who learns to cite Mandarin Chinese as a tonal language also learns the same word as an example (four words, actually): ma. There are many MANY others though.  I learnt ma, but I was not surprised to see that Wikipedia used it as well. It‘s certainly worth a visit to the original, as it has an accompanying audio example; that‘s what I call "exempli gratia".

As that article says,


Tone is the use of pitch in language to distinguish lexical or grammatical meaning – that is, to distinguish or to inflect words.[1] All verbal languages use pitch to express emotional and other paralinguistic information and to convey emphasis, contrast, and other such features in what is called intonation, but not all languages use tones to distinguish words or their inflections, analogously to consonants and vowels. Languages that do have this feature are called tonal languages...

I suspect, as the order of the tone/meaning relations is the same, that Wikipedia‘s source for this example was this. But maybe I'm doing them an injustice; the voices in the two examples are different, and there might for all I know be some technical or just traditional reason for observing that order.

Anyway, that's not the sort of tone that concerns me here.  In discussions of stress, it's common to use the word tonic to refer to the stressed syllable, and a family of related words – atonic, oxytone, paroxytone.... Etymologically, these all refer back to the Greek τονος:

Arma virumque cano. CANO  ("I sing)".  I remember coming across a speculation once about what the diacritics in Homer signify: just stress, just tone (musical pitch, frequency), a mixture of the two...? It may have been in one of the first books I edited  – The Greeks and Their Heritages, published very posthumously as Arnold J. Toynbee died 6 years before it was published; so unless he was writing it on his deathbed the typescript had been knocking around at OUP for longer than that, waiting for someone to get stuck in.

There is, in Spanish, a usefully self-referential word for a proparoxytone (as I'm afraid linguists call a word stressed on the last syllable but two  –  or, to use another $10 word antepenult. The word is  esdrújula; and esdrújula itself is an example, geddit? – so it's a lot easier to remember than proparoxytone. So is proparoxytone of course;  but so also is paroxytone, and so is oxytone, which spoils the party rather.

So I'll stick with esdrújula. Esdrújulas cause problems in language transmission (to a learner, that is). In languages that are predominantly, as regards words of more than one syllable,  paroxytonic (dah-dee) there is a tendency for the esdrújula stress pattern to be ironed out.

Take, for example, the esdrújula (Latin) word cathedra, which referred originally to a sort of chair (the sort a bishop sits on – we still refer to a bishop's seat [and in Portuguese a cathedral  is uma sé]. When the Pope makes an important  pronouncement, he delivers it from the papal chair – ex cathedra. But this is commonly rendered mis-stressed as ex cathedra. The choir of that name is often (almost always, on Classic FM) referred to in that way. In fact, they may have taken the pragmatic decision to go with the flow – as did Vladimir Horovitz in another case of mispronunciation.


<digression theme="Horovitz">
Until he started performing in the West the legendary pianist kept his native initial /g/PS – written "H" in Cyrillic script. But, when Western agents and promoters started pronouncing his name with an /h/, he effectively changed his name.

I suspect Einaudi may have taken a similar course; this needs further attention.

Ex machina is another esdrújula often mistreated (ex machina), and  – a frequently suffered trial  in the life of a choir member  – Carmina Burana (Carmina).


<rantette>
And another thing, while I'm on the subject. That tenor/conductor's name is Plácido  Domingo ("peaceful Sunday" [what I'm hoping for now the grass is all mown]) – that's why the accent's there. Think of the English "placid". It isn't the (metrical) twin of "placebo".
<rantette>

Underlay, the relation between notes and words (mentioned here), is often a guide (when the composer speaks the language). Here are two examples from a piece I'm singing in June: 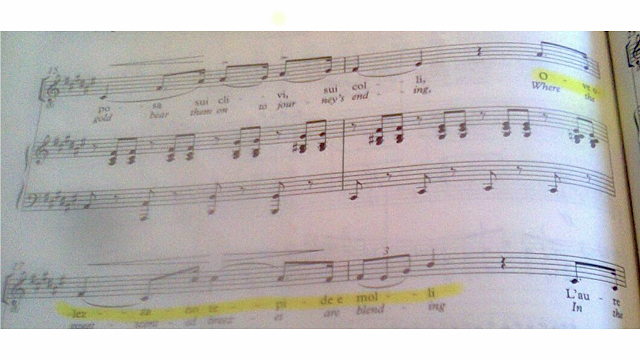 That Verdi bloke would've absolutely aced  his Grade V Theory (setting a text): the stressed syllables, including two esdrújulas , fall on the stressed beats in the bar. In fact, if Verdi had written it – boringly  (he didn't) – in ¾ time, they would each have fallen on the first beat of a new bar. And in that uninteresting ¾ version, although both the te- and the pi- of tepide start a new bar, it's clear that te- is the more stressed syllable because its note is longer and pitched higher.

But any more on this topic will have to wait. I'm outta here.

Adverse camber, a cause for apprehension? (6)

PPS On the subject of stress and tone, another song we're singing in our forthcoming concert is It ain't necessarily so – which includes the words "He made his home in that fish's abdomen". The underlay forces stress on the second syllable, which – on a first hearing many years ago – I put down to American English. But many dictionaries give both (though always, in my experience, with abdomen having pride of place). I had previously assumed that the British English stress was the one given unequivocally in the Cambridge Advanced Learner's Dictionary:

No option given there,  whichever side of the Pond you're on.

But I'm regularly struck by my Tai Chi teacher's (her mother tongue not being English) pronunciation of "abdomen". And I think I may have found a clue (though not an explanation). Various editions of, for example, the Free Dictionary have foreign voices carefully pronouncing examples with all vowels given their canonical sound (as though stressed): the Netherlands one gives clear stress to the second syllable; these two are less clear, as both vowels are as if stressed – French and Spanish. But it seems as though languages with the same spelling for the word abdomen don't change their stress when they speak English*, so end up with the abdomen stress, as given in the English Language Free Dictionary audio example.

And here are a  couple more clues;

And time's up on the first one (set nearly three weeks ago): MACABRE

* Come to think  of it, you can bet your life that Moishe and Rose Gershovitz's native language had stress on the -do-, so naturally their son Ira pronounced it that way.

PS The answer to the second clue: PIERROT. Sorry, the first (of the last two) has me beat :-)

PPS: ¡En fin! The answer I couldn't fathom has come to me: ATTEND.

PPPS This is rubbish, though nearly right in a sort of way. I got letters and phonemes the wrong way round (the info had been dormant since 1982 [when I was editing a book on Horowitz]). The sound is [x] and the Cyrillic is G. He didn't change his name, but he changed his spelling to stop (non-Russian) people calling him Gorovitz. I had been worrying about this for some time, but a Russian interviewee on the news this morning, saying the Eurovision Song Contest was a modern-day "Sodom and Χomorrah" alerted me to the error.
Posted by @BobKLite at 15:45