Almost a year ago I wrote here about words making way for other words in dictionaries. My use of the evanescent word burgher ...

...has been dragged out over more than a century
</digression>


... led me to think, not about words replacing others but words dying out while others become more popular – even though they're completely  unrelated.


<digression>
This happened in the case of let (meaning obstacle), because of a pun caused by the Great Vowel Shift (which led to the words for obstacle – as in without let or hindrance or a let in tennis...


<rantette>
... and gawd 'elp me I'll swing for that tennis commentator who insists on saying "let-cord" (which is, for the record, hyper-correct)...
</rantette>

... and (not because of the vowel this time, but because of RBP's careless conflation of the sounds [w] and [ʍ]* into a single /w/ phoneme) in the case of whet (meaning sharpen).

* [ʍ] is the "whispered" /w/, sometimes represented  in print as hw – still apparent in the spelling "wh" (making the word whispered strangely appropriate).

AND I'VE COLOURED IN THIS STACK OF DIGRESSIONS

TO MAKE IT SLIGHTLY EASIER TO MAKE SENSE OF.

In that blog I wrote of  "the burghers of Ealing"  – which itself seemed rather strange.


<digression>
Incidentally, burghers collocates with the and of about 10 times more frequently than burgher, as this BNC search shows; and for some reason the burghers of Ealing seems much less resonant than the burghers of Hamelin.
</digression> 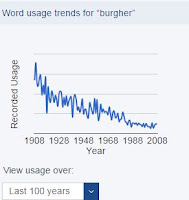 But while I was looking up the spelling here I glanced down out of interest at the Usage Trends – which made me wonder what occasioned the change. Was the relative neologism burger involved?

The word burger was shortened from hamburger in 1939 – that is, 1939 was the earliest attested usage; it was no doubt gathering a head of steam throughout the inter-war years.

Here is what Etymonline says (about hamburger, as burger just has a terse cross-reference):

1610s, Hamburger "native of Hamburg." Also used of ships from Hamburg. From 1838 as a type of excellent black grape indigenous to Tyrolia; 1857 as a variety of hen; the meat product so called from 1880 (as hamburg steak), named for the German city, though no certain connection has ever been put forth, and there may not be one unless it be that Hamburg was a major port of departure for German immigrants to United States. Meaning "a sandwich consisting of a bun and a patty of grilled hamburger meat" attested by 1909, short for hamburger sandwich (1902).

So in 1902 hamburger sandwich was attested in American English; and a few years later the unrelated [w e l l... the burg- part of it was, via the placename, but the concepts burger and burgher are unrelated] burgher started to dwindle in  popularity. 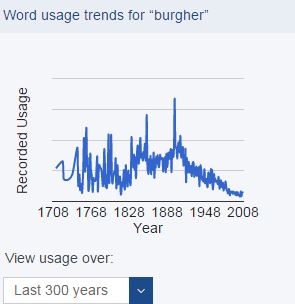 Started to dwindle? How do we know? Collins helpfully lets you specify different extents for a word's changing fortunes, and taking the word frequency back another two hundred years we see something of a roller-coaster. The general trend was up throughout those first two centuries, though with many ups and downs; and there was a marked peak at about the turn of the century. But the story has been one of fairly consistent decline throughout the twentieth century and beyond – which I think justifies my use of the word started.

Of course, many other things have changed – politics, various kinds of context... Besides, I am the last (excuse the hyperbole, maybe ante-pre-penultimate) to make the rookie mistake of confusing correlation with causality. And anyway, the slide in frequency was well under way before the abbreviation was coined.. Still, it all strikes me as rather THINGish.