Yesterday a silly editorial slip let this post go out under a rather boring title. Well, Tempora mutantur isn't intrinsically boring; it was pretty interesting when that Latin guy first used it. But it's rather lazy now, and was a working title. Making room does a better job of justifying the gear-shift from New words for old to New markets for old.

In this term‘s CAM (CU alumni magazine) there‘s an article about words used to describe landscape. It‘s quite fun, though not as much as I had hoped. And my enjoyment of it was spoiled by an Introduction that made the writer sound like a Daily Mail-reading saloon-bar bore: 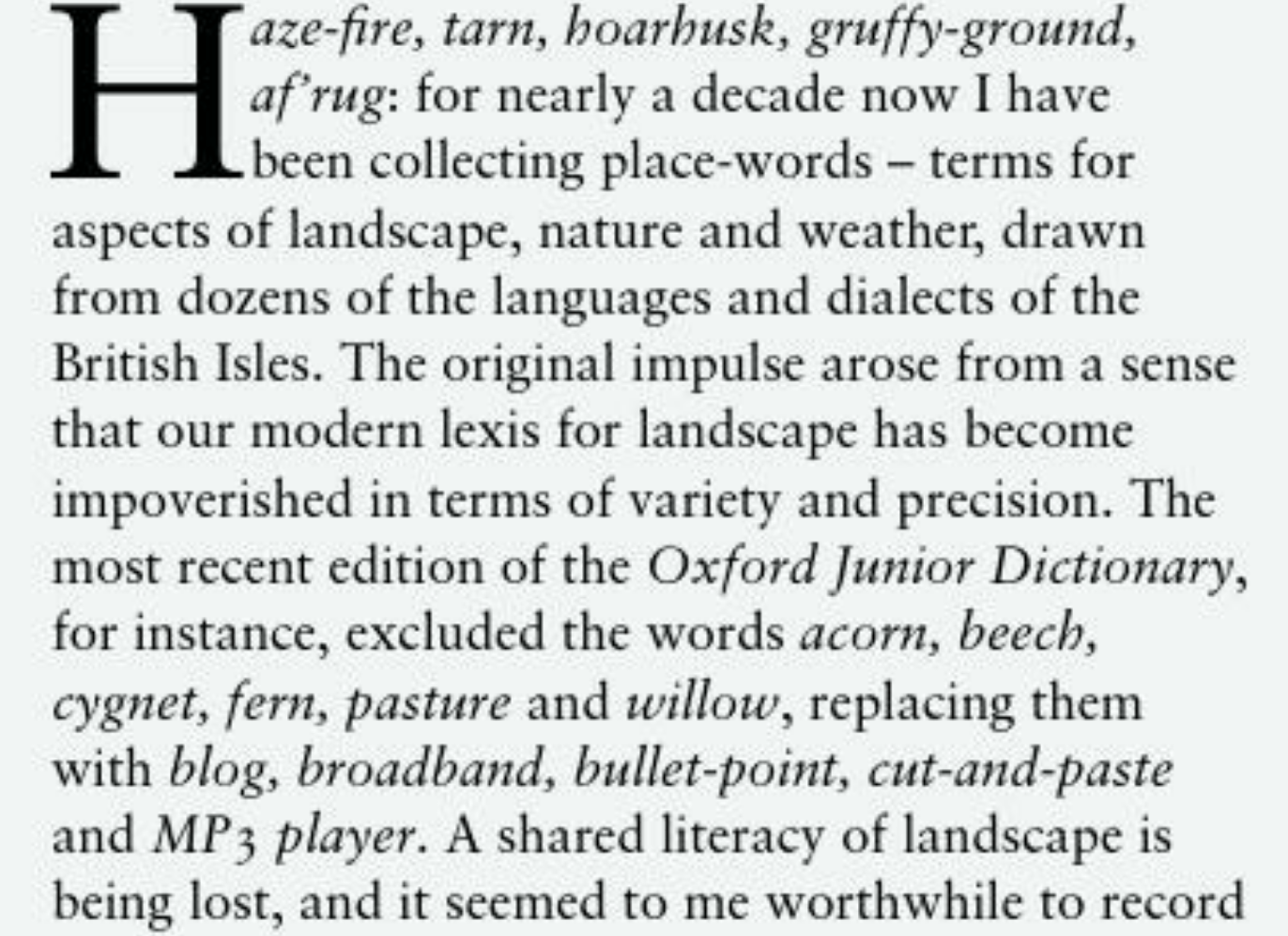 ....and blah blah blah. "Why, in my day,"  one can  imagine him saying, "we had to read a chapter of Gibbons before breakfast!"

This is strange. The writer, Robert Macfarlane, who is reading from his new book Landmarks this week on BBC Radio 4, doesn't sound like that; he is a youngish Fellow of Emmanuel College, one-time winner of the Guardian First Book Award, the Somerset Maugham Award, and the Sunday Times Young Writer of the Year Award.

He should choke on his kedgeree no more. The realities of  dictionary-publishing, rather than the corruption of Our Youth, are the issue. A saleable dictionary, whatever the market, is of finite length. The editors of the Oxford Junior Dictionary aren't scheming cultural vandals who with malice aforethought "excluded" morally justified words and "replaced" them with today's ephemeral playground slang.

A modern dictionary  uses a corpus (a word-bank). Words come and go.  And in a finite dictionary the ones that are going have to make room for the ones that are coming. If, in the chosen corpus, MP3 Player occurs N times but acorn occurs N/100 times  then the writing is on the wall: acorn is weighed in the balance and found wanting. It's not a bad word, it's not a non-word, it just doesn't pull its weight in a 21st-century dictionary which records words relating to a 21st-century Junior (in that case) environment. Horses for courses.

The new words only replaced the old ones in the value-free sense of occupying the space that they (the old ones) had occupied in the previous edition. Once, that loathsome Americanism boyfriend usurped the position of swain. Language goes on, and the world of printed books tries more or less vainly to keep up.

Another instance of a passing trend that has been in the news of late (and the link is tenuous but not that tenuous) is the news that Kingfisher is back-pedalling on the DIY-front. They said on the Beeb that Kingfisher were closing some B&Q stores and opening some Screwfix ones (which cater for the trade) because the trend now was for lifestyle spend rather than DIY.


<rant>
...which explains the current spate of TV adverts (Kärcher is the latest offender, but there have been many others) that imply that a man is a ham-fisted klutz who spends hours getting tooled up and his wife saves the day by the simple expedient of spending a great deal of money. Of course! Why didn't the silly fellow think of that in the first place! DIY is so LAST YEAR.
</rant>

So the brilliant idea someone had back in 1997, helping form an association in web-users' minds between B&Q and DIY, has had its day:
Well. word-face calls; apropos ....

I have Sigil working on Linux now. I may have said a while ago that Sigil (a WYSIWYG tool that produces EPUB files [standard mobile reader format]) was supported on Linux (which it may well have been at the time). Well, it's not. But being not supported is not the same as not working. It might mean (and does in this case) that it works but needs a bit more homework on the part of the user.

But it's changed a good deal since I last used it, and can do much more than it could then. I need to spend some time seeing what it can do. So my earlier claim (earlier this year) to have worked out a modus operandi was a bit previous. So talk among yourselves....

b
PS And here's a clue to be going on with:

Couple at work with gin, but no energy for that sort of thing! (10)