How low can you go?

A guest on a recent Midweek was Willard Wigan, the maker of very small sculptures. As his website says


Willard’s micro-sculptures are now so minute that they are only visible through a microscope. Each piece commonly sits within the eye of a needle, or on a pin head. The personal sacrifices involved in creating such wondrous, yet scarcely believable pieces are inconceivable to most. Willard enters a meditative state in which his heartbeat is slowed, allowing him to reduce hand tremors and sculpt between pulse beats. Even the reverberation caused by outside traffic can affect Willard’s work. Consequently, he often works through the night when there is minimal disruption.

Willard’s artwork has been described by many as “the eighth wonder of the world”....


I'm not so sure about the Eighth Wonder thing. My tip for octavio-mirabilitude (I've no idea how English has managed for so long without a word for the quality/fact of being the eighth wonder) is the sculptures that are much smaller than "only visible through a microscope". I'm not sure of the numbers in relation to Willard Wigan's sculptures, but the technique of DNA Origami surely beats them into a cocked hat. In this video the narrator says that her nano models, in comparison with an origami model of about the size of a bag of sugar, had the relative size of a grain of sand to Mt Everest. They are much smaller than simply microscopic. More of this anon, but here's a taster (borrowed from  CAVmag 13 [after a little tweaking]): 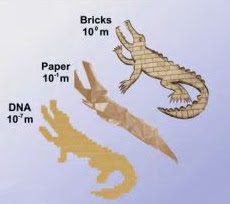 And while I'm on the subject of scale,  my latest award of a Tezzy (first mentioned here,  but awarded irregularly several times since to a super-cool(ed?) site – best avoided if you've got a deadline to meet) goes to this. It's similar to an earlier version produced (also by NASA) that  I saw in the closing years of the 20th century (but not, I don't think, as another NASA page says


the most famous short science film of its generation ... Powers of Ten, originally created in the 1960s

).  But it's much cooler, and interactive, and takes only a few seconds to load – well worth the wait.

This is a new one on me, but maybe it's been part of the jargon of Sales since time immoral.


What's the one thing sales teams generally suck at? Onboarding new sales reps.It isn't anyone's fault, though. It's difficult to nail down an effective onboarding program. According to research firm, TOPO: 72.5% of high growth companies hire sales reps with 0-1 year of experience.

But most teams don't have an onboarding process. This sets reps up for failure. The sad part is they have the potential to become top performers, but only if they receive proper onboarding...

It seems to mean roughly the same as inducting, but with less strait-laced overtones. The spam that told me about this amazing opportunity linked to this page, which interested parties might want to upfollow.

In the early 1930s Pyotr Kapitsa persuaded his colleague Ernest Rutherford to spend £15,000 of a government grant to build a new laboratory in Cambridge. As the CU Department of Physics website says:


The Laboratory was built in 1933 by the Royal Society for Kapitza to continue his work into intense magnetic fields. During the building work, those passing the lab were surprised to see a figure in a brown monk's habit busily chipping away at the brickwork behind a tarpaulin screen. This was Eric Gill who had been commissioned by Kapitza to carve both a plaque of Rutherford and this Crocodile...

The reason for this, on the face of it, odd choice of subject is a cause for some debate. Everyone agrees that Crocodile was his nickname for Rutherford, but there are various versions of the reason behind it:


..."The Crocodile" [was] Kapitza's pet name for Rutherford, either because of his fear of having his head bitten off by him, or because his voice could be relied upon to precede his visits, just like the crocodile's alarm clock in "Peter Pan".

The first of these is pretty unimaginative; the more literary Peter Pan-based one strikes me as more interesting; and given science students' predilection for cult/fantasy fiction (which Peter Pan may have been at the time), it's the reason I favour.

Anyway, the crocodile sculpture is quite well hidden. In three years living within a quarter of a mile of it (and in two of those years less than half that)   I didn't see it until last Sunday, when I went back to Cambridge to sing Messiah. 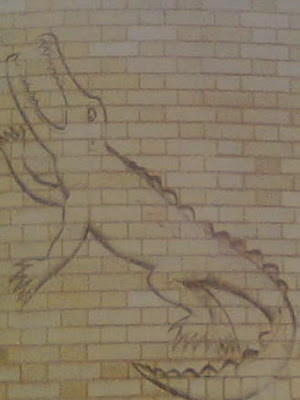 The picture of the three crocodiles I borrowed from CAVmag is a little misleading – though not to a serious extent. I could, by estimating the brick size, have calculated the applicability of the caption Bricks 100m. When I saw it in the flesh (or, I suppose, brickdust) I saw that this was a bit of an underestimate. The vertical extent of the bas-relief is indeed a little over 100m (which to us non-mathematicians means, I think, 1m). But, even with its curled tail, it forms the hypotenuse of a right-angled triangle with base ca. 0.8m; so its length is more like  √1.6 m. With its tail uncurled (like the middle one of the 3 crocodiles) it would exceed 1.5 m. This makes the size of the DNA origami crocodile even more impressive.

I had hoped to use my visit to Cambridge to see DNA origami in action, but the opportunity didn't arise. As this post has been visited more often than all but 4 of my posts – all of which have been around for 3 or 4 years, as opposed to this post's 3 or 4 weeks – I was looking forward to updating it with something  a little more substantial (rather than this somewhat trivial reflection on what is – I must admit – a pretty unimpressive Eric Gill pot-boiler

And a thematic  one:

(Hint: the last two words make this nigh-on impossible for people with no experience of/in the UK. If you can't  bear the ignorance, look at the HTML source [where there's a comment].)