Progress with Unity (or was it Nancy?)

I can date with some precision my first exposure to the horrid "going forward" (in the meaning from now on (which saves a few characters, saves one syllable, doubles the opportunities for sensible line-breaks – go-ing? for-ward? – and has the added advantage of NOT MAKING YOU SOUND LIKE A TOTAL WALLY).  I was reminded of this quite unexpectedly when I happened to see a flurry of tweets such as these: 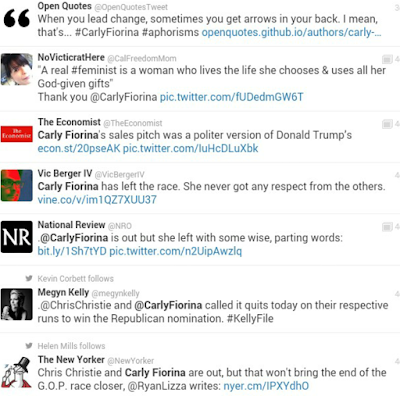 Not being a close follower of a Presidential Election that's not going to take place for another nine months – we haven't reached Peak Bull$h*t  yet, not even close – it was news to me that she was even in the running for nomination (until she wasn't).

In September 2001 Ms Fiorina, in only her second year as CEO of HP (or "H-P" to use the rather quaint style favoured by the Wall Street Journal) made her play for Compaq (the shrimp that had engulfed the Bostonian lobster that I had started to work for in 1984, acquired by Compaq in 1998). A short time after her arrival in my world (probably in late 2001, or possibly early in 2002 – I have a feeling that she may have wished us well for the Holiday period, but I wouldn't swear to that memory) she spoke to her worldwide empire in a huge video conference. I was one of the few hundred employees crammed into the canteen at DEC Park – or the employee cafeteria at Worton Grange as we were corporately adjured to call it. But we were one little outpost; questions were phoned in from all over the world.

Revenons à nos moutons  – "going forward". In that video conference (a description that grossly overstates its interactivity – it was really a TV broadcast with a few carefully sanitized phoned questions  tacked on at the end) Ms Fiorina outlined her view of HP's future (which didn't include the bit about her being kicked out in 2005), and during this rose-tinted vision she used the phrase going forward several times. The first time she used it –  although it was not difficult to interpret, because of English's (and most [if not all?] other natural languages') use of the space → time metaphor – it took a moment to sink in; had she really said that? Well, she had, and went on to do so several times more. Maybe it was current then in the American business world. But it is now, even in the UK.

I referred in my last paragraph to 'the space → time metaphor' . I think I've provided examples of this somewhere in my earlier posts. I'm sure I've come across it in works by David Crystal and Steven Pinker (not in collaboration [!]) But links to these will have to wait for an update 'for I have promises to keep and miles to go before I sleep and miles...' (you get the idea).

PS. Here are some of the links I promised.

The Pinker one is from The Stuff of Thought: Language as a Window into Human Nature (edition-specific reference; other editions are available) p. 191 et passim:


The similarity between space and time is limpid enough  that we routinely use space to represent time in calendars, hourglasses, and other time-keeping devices. And the cognitive similarity  also shows up in everyday metaphors, where spatial terms are borrowed to refer to time.

My post was about transport rather than space, though speed (space/time) is central to that idea. Here's a taste:


He [Ed: Brian Foster, in The Changing English Language] writes:

'Cavalcade', etymologically a procession  of horsemen, has given rise in American English to a series of words in which the -cade element denotes the idea of 'spectacular display', e.g. aquacade, musicade and motorcade. Of these only 'motorcade' has penetrated into British use.... It remains to be seen how productive this ending will be in Britain....

Well, he was writing in 1968 (or before), so I think we can stop holding our breath;  -cade's hopes of becoming a productive suffix in British English, can wave forlornly to that slow-moving motorcade, or cortège, that follows many a linguistic speculation like this.

But elsewhere automobile-based metaphors pervade the language. A person who is not at their best can be said to be 'not firing on all four [cylinders]'. Rather than rush you can 'put the brakes on' (or, with a nod to former times, you can 'hold your horses'). If you're in a hurry you either 'put the pedal to the metal' (which must come from American English, as the wordplay is better with an American accent) or 'step on it' or 'burn rubber'. The point where, for the walker 'the shoe pinches' is where 'the rubber meets the road'. And while we're on the subject of tyres, assessing the suitability of something in a desultory way, with no clear intention of buying it (either literally or figuratively) is 'kicking the tyres'. People who need to get moving should 'get their a$$ in gear' and someone who's making progress is 'going through the gears'. 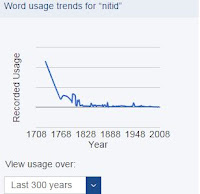 I must have dreamt the Crystal quote, or – more probably – just can't find it. Anyway, the metaphor is clear and suggestive, or to use Pinker's word limpid, which I'll trump, if I may be so bold, with a word I've just come across: NITID. This word, defined by Collins as (poetic) bright; glistening deserves, I think, a new lease of life. The Collins Usage Trends graph shows this sad decline (meteoric, in the falling-rapidly sense). In the 18th century the word must have been on everyone's lips:

Where was I? Commonness. The future is in front of us; the past is behind us –everyone knows that. And I'll bet that no language teacher could ever have taught the past tense without pointing back over their shoulder. En seguida ['following'],  sur-le-champs ['on the field' – hmm, not sure how that one works; perhaps it's the field of battle, where you have to make split-second decisions...], langsam ['lengthily', to mean 'slowly']... there must be hundreds (thousands?) more.

PPS. I've just realized that my subject line (Progress with Unity...) makes little sense to anyone not having knowledge of my early drafts. The word progress suggested itself to me as a possible meaning for going forward – "as we  progress". Progress with Unity is the motto of the Borough of Ealing – "QUEEN OF THE SUBURBS" as  it was once known.

In the '60s, with Ealing, Acton, and Southall conglomerated, the burghers of Ealing realized that they needed a new coat of arms; the old one, granted in 1902, was reworked. "The boring old elitist Latin obviously had to go – but hang on, what did it mean anyway?"

Coincidentally, it exemplifies that space/time metaphor this blog was looking  at earlier: "Look back [and] Look forward". "Well," said that burgher (talking in the Swinging Sixties) "Look back? Where's THAT at? But Look forward – that works."

So, ironically, the new motto does "Look back", in that it keeps the idea of looking forward from the 1902 version.