Having finished a rough-cut (very rough) of the *il* section, I'm taking time out to reflect a bit on the Android spell-checker.

Android's spell-checker never ceases to amaze me: its latest suggestion, for "n o-frills" is
"up-front" which does share a hyphen followed by fr, and (though in the wrong places) an "n" and an "o"; but it shares nothing else.

In these five cases I hadn't made a mistake, but Android (or maybe Kingsoft Office – the software I'm using [I'm not really on top of this thing]) still felt I needed some help finding le mot juste:


I wonder what's wrong with ill-advised, apart from the general hostility to the hyphen felt by some users of American English (mentioned here). Anyway, I'm impressed by the creativity underlying the suggestions of alternatives. 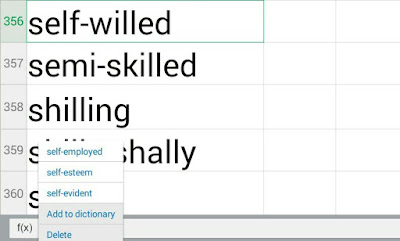 I detect a somewhat Calvinistic value system at work here. 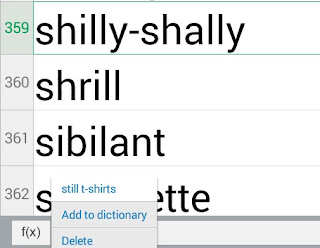 From stern to surreal. I generally expect my t-shirts to be still. The notion of an autonomous (automotive?) one is rather disturbing.

I wonder which of these full-time things is the least surreal; or indeed the most. A full-time logo sounds like something Harry Potter might know about, akin to those moving pictures in the newspapers.  And what would it do on its day off?


Enough of this. Onwards and *ol*wards...

(PS... but this word-bashing is pretty arduous, and I have an interesting idea for a real book. So I'll carry on with #WVTbook2 as far as *ul*. Then I'll take stock,  and [maybe] change direction.)

Email ThisBlogThis!Share to TwitterShare to FacebookShare to Pinterest
Labels: Android, hyphens, When Vowels Get Together - progress