This extract, particularly the use of actionable, was in line for a FOGGY. But I thought better of it. The word, as they say, does what it says on the tin, so what grounds have I to be sniffy about it?


Each day, our society creates 2.5 quintillion bytes of data (that’s 2.5 followed by 18 zeros). With this flood of data the need to unlock actionable value becomes more acute
Source: Coursera

The word actionable is not in the Macmillan English Dictionary  (except, of course, in the legal sense) or in Collins English Dictionary or Cambridge Advanced Learner's Dictionary, or in the 1913 edition of Websters. In the first of these the word has a URL that suggests it is 'American' (a common, usually mistaken, gibe – but that's another story, brushed on in this blog,  passim).

But Webster's New World College Dictionary has the new sense:

This has taken two steps away from the Path of [prescriptive] Righteousness:
And the Oxford Advanced Learner's Dictionary has caught up with the second meaning too.


It's a change that has been coming for some time, which is indicated by the Collins frequency graph showing actionable's frequency (although, as I've noted above, Collins doesn't note the new meaning): I suspect, though proving as much would take more corpus-query nous than I have*, that the rapid rise from the mid-'80s...


<autobiographical_note>
When I started my involvement with writing about  computer networks, in 1984, I had to get used to (and learn to live with) several new applications (there's one, for example) of words I'd been happily using for years. One of these was 'actionable', frequently used in the world of nets&comms where, as I understand it, it is used to describe a chunk of data that the software knows what to do with [and excuse the personification – that was another trick I had to get used to: a software engineer who means ‘the software assesses the data and sends it to X' {where X is another software module being developed by engineer N} says ‘I sniff the data and hand it to N'; a neat bit of jargon, but one that calls for quite a bit of decrypting]. This Google search shows that on a single site (w3.org  – home of the relevant geeks) there are 1,750 hits.
</autobiographical_note>

... is due to the spread of the new meaning.

All of which is pretty plausible... Except that I have conveniently cherry-picked my data.  Going back a further 50 years the same Collins site shows this frequency:

So what's the message? Perhaps this just underlines a point  made by David Crystal in his treatment of the 100th word, twittersphere, in The Story of English in 100 Words:

What causes language-change? Events, dear boy, events – among other things.

Update 2015.11.10.20:40 – added this note:
*It was easier than I expected. This BNC search throws up 87 hits for "actionable". Of these, 66 are marked as academic, and of those 64 have the sub-class W_ac_polit_law_edu. So, making the safe assumption that the ones in that sub-class had the legal meaning, there were only 23 to trawl through by hand. Out of the 87, all but 2 have the legal sense.

Update 2015.11.11.09:20 – added this PS:
PS This note, I now realize, suggests the precise opposite of  what I wanted it to. I wondered if the American story would be different. This COCA search shows that things are very different for American English: 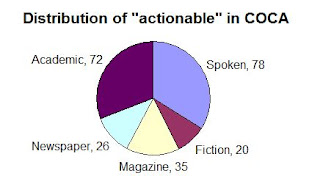 This calls for further reflection, but not now.

Freebies (Teaching resources:  Well over 49,900 views  and nearly 9,000 downloads to date**. They're very eclectic - mostly EFL and MFL, but one of the most popular is from KS4 History, dating from my PGCE, with nearly 2,700 views and nearly 1,100 downloads to date. So it's worth having a browse.)