A few days ago my attention was caught by this tweet:

I did what I was told, and read this post. It's a fascinating field, but I was side-tracked by a digression prompted by these words...


When copying an accent in song turns out, it is all about the vowels. “Singing is all about vowels. Language is altogether is really [HD – sic; I suspect a hasty edit {you''ll know the sort of thing if you've read some of MY stuff}] vowels interrupted by consonants. Although there are things you have to be careful of when singing consonants generally it’s the vowels you have to be careful of.” Nail the vowels and you can nail the accent...

... particularly the word consonants. When you think about it – and you may have noticed that thinking about words is something I do – it does what it says (in a way often pleasing for the etymologically minded). Vowels could be regarded as 'sonants'  (not to be confused with sonorants – which really are A Thing in the world of phonetics [and I see that my made-up word sometimes is used like that {as here}, Aw shoot ...]). My point is that vowels are things produced by the vocal cords, or – to use my attempted, but misfired, neologism – 'sonants'. Con-sonants are things that just hold them together. If you think of an utterance as a stream, the water is the vowels; the consonants are the stepping stones.

Recently I was watching a French drama with subtitles. A subtitle read 'Have you had one?' I tried to recapture the original from my short-term memory, but failed; in my defence, it was late evening; earlier I'd've been  listening and not reading. It might have been (though I can't guarantee it)  Tu en a eu une? Hearing and making sense of that calls for quite some linguistic skill [and, for the non-Francophone, plenty of practice with the /y/ phoneme – on which, don‘t get me started]. After the elision of en a the only two consonant phonemes among all those vowels are /n/ (twice) after the initial /t/.

The idea of accents in singing reminded me of a concert I sang in  nearly thirty years ago.


Our conductor was a very young Paul Daniel. About two weeks before the concert, he started feeling a pain in his shoulder. He kept rehearsing us until the very last Thursday rehearsal, so on the Saturday we turned up for the dress rehearsal fully expecting him to be there.

But on the Friday he had seen a specialist who told him if he conducted us the following day he might do serious damage. So, at almost no notice, we had a deputy to conduct us. The choir's records are sketchy, for so long ago. Paul Daniel was with us for 3 years (that's twelve concerts, of which he missed one), and there are records here of only 2 of his concerts. But there is also this:

Brian Wright had driven down that morning from Yorkshire. And when we sang


The God of Brass

he winced. He had been used to northern choirs, and was not expecting our /ɑ:/. I wonder what vowel Walton had in mind.

I have long felt that the life of a choral singer would be made simpler if music publishers adopted use of the IPA. Amateur choirs don‘t have the luxury of foreign language coaches – mentioned by the opera singer interviewed in Faking the Funk::


I’ve long thought that it was easier to sing in an accent that isn’t your own than it is to speak in a foreign accent. This turns out to be somewhat true according to Bill Beeman, a sociolinguist at University of Minnesota. Beeman also happens to be an opera singer. He speaks and sings in multiple languages: English, German, Italian, French and Russian. However, his accent in each of these languages is acctually better when he sings than when he speaks.

“My accent when I’m singing is very carefully constructed and we use coaches when we’re singing in order to be able to produce the language as perfectly as possible,” he says.

I don't think I've ever sung Fauré's lovely Cantique de Jean Racine  [ranted about here] without a more or less protracted argument – repeated in rehearsals – about the false liaison of très with haut. And I've sung it at least a dozen times [in concerts and other performances, that is; getting on for a hundred rehearsals. On one occasion it was a tenor [who doesn't even sing the words in question] who complained: "We sang it that way [HD: the 'thirteen waters' versionPS/PPSon tour in Belgium and had no complaints." GIVE ME STRENGTH!

It would make the life of a choral singer much simpler, as I said. And each choir that cared about these things would only have to have one member, learning at the most a few dozen symbols. Besides so many amateur singers are language teachers (I wonder why...?) that the relevant expert would be readily to hand in most cases.

But I put it to a man at OUP who convinced me that it would cause so much upheaval (and cost publishers such a deal of money, I think he meant) that it just won't happen. But a chap can dream....

Enough dreaming though. There are words to be learnt for Saturday.

Just back from this: 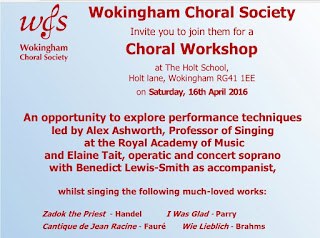 A good   day‘s sing. We sang the Cantique, and – true to form – there was a smattering of the thirteen waters version. Oh well – these things are sent to ... evoke clichés