Those words are from the text of the Requiem mass... 'when the heavens and the earth are moving'.

The recent terrible events in Nepal reminded me of three things.

The first  was 'The Great Peruvian Earthquake' of 31 May 1970. Again there was a complete   breakdown in communications. As it happened there was something  else going on not too far away, kicking off on that very day: the Mexico World Cup. The father of a member of the group I sang and played with was Peruvian, and was trying in vain to get news of his family. It struck me as ironic that at a time when hundreds of journalists with millions of pounds worth of hi-techery (which we had been told about in awestruck tones for weeks beforehand by Jimmy Hill  and his fellow pundits – the instantaneous action-replay  was a new invention at the time


<weasel_words>
...well maybe not brand new. Perhaps like many technological sporting innovations it was known of but thought too expensive – until an excuse for conspicuous consumption arose (something REALLY IMPORTANT like the FIFA World Cup.)
</weasel_words>

, and was going to revolutionize football commentary) were so nearby (well, on the same page of the map at least), the plight of the Peruvians was so dire.

I being in my Peter  Starstedt  phase (Where Do You Go To (My Lovely)?  had spent 4 weeks at no. 1 a few months previously) I wrote a song – another of Paul Simon's 'songs that voices never shared':

In homage to Starstedt's whimsical Zeitgeist-y references ('You sip your Napoleon brandy, and never get your lips wet'...) I had odd portentous sallies like 'What have you done, Jules Rimet?' The most heavily ironic touch  was a setting  of the football chant

in a minor  key. Pretty poignant, I think you'll agree.

The second was a reflexion on musical settings relating to earthquakes, which I wrote nearly a year ago here, and which I felt merited another airing:


The going rate for the (musical) difference between heaven and earth seems to be about an octave. (This is an open goal for musicologists – my theoretical knowledge of music is minimal. Please comment if this needs another update.) Verdi, as I said, drops an octave from coeli to terra (after a bar containing higher notes). [Update: the main piece had referred to Verdi‘s Requiem, which, at the time, I had recently sung.]

Fauré, an enfant terrible who was nick-named Robespierre during his Directorship of the Paris Conservatoire because of his reforming zeal, toys with expectations in his setting of Libera me [part of his Requiem]. 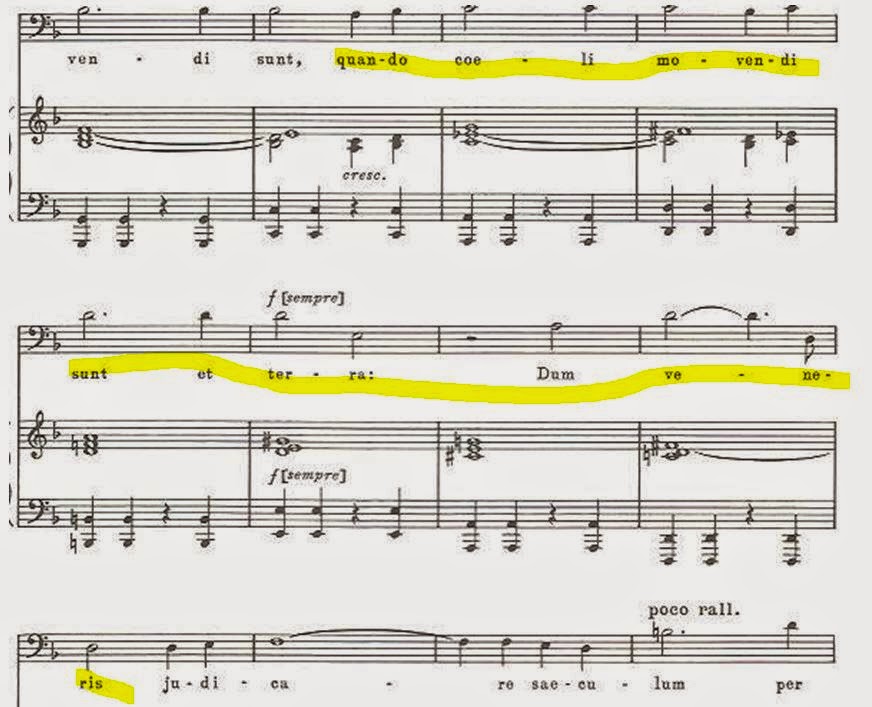 The words are des-cribing the Day of Judgment. Quando coeli movendi sunt – 'not too scary; a clap or two of thunder. But hang on ...et terra. Not just thunder, that felt to me like an earthquake – I've got a REALLY BAD feeling about this.'

But the drop isn't quite an octave. This minor seventh coincides approximately with the 'that felt to me like an earthquake' in my imaginary commentary. What coincides with the words 'I've got a REALLY BAD feeling about this' is the octave drop at '...Dum veneris' {='when you [will††] come'}. Taking the music along with the text you get an even more intensely growing feeling of impending doom.

††This is not to suggest that the original writer had any choice about using the future (if he [almost certainly a he] used a finite verb, that is). Latin, like many languages, just does this; ESOL students in fact, find it very difficult to buy in to the English way (and even when they've 'bought in', a pretty reliable bear-trap remains – a potential error that few manage to avoid!) I only insert the 'will' as a way of underlining the fact that the Latin makes it very clear that THIS IS GOING TO HAPPEN. A common way of dealing with this in English is the addition of an expression like '... And it's a question of WHEN rather than IF'.


The third was to wonder if there was any remote etymological link between 'terra-' and 'terror' – and it seems there's not.  It's just a coincidence that earthquakes (Sp. terremotos


<digression>
I use terremoto rather than tierra lest anyone think 'But of course  tierr- is not the same as terr-.'  A Spanish speaker wouldn't feel this, being used to the e/ie variation under conditions of stress in some sorts of /e/. This accounts for many irregular Spanish verbs, such as tener – with stressed tiene [='he/she/it has'] but unstressed tenemos ['we have'] (well, not totally unstressed of course, but unstressed in the relevant syllable). (Italian doesn't do this: terracotta but also terra.)

) are both terrible and terrifying.

The Proto-Indo-European root for tierra is given in Etymonline‘s entry for 'terrain':


Meanwhile, under 'terror', the source is different:

See more here (if you're that way inclined).

And the possibility of a metathetical link between *ters- and *tres- doesn‘t seem to me worth fretting about; that would be a supposed phonological development in a language that exists  only in  the minds of a few linguists.

PS At the end of last year I referred to a growing following, then reaching an average of 35 daily visits. Well 35 schmirty-five. This has been a record month (an average of over 55 visits per day), and the latest version of the graph I gave then reflects this: 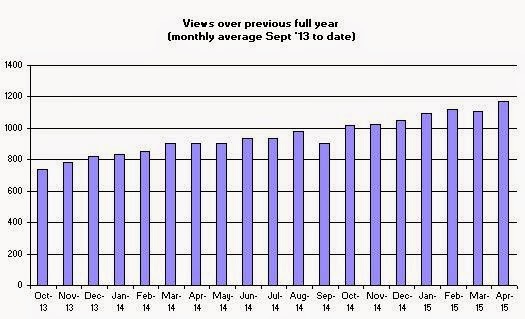