I am now the pleasantly confused owner of an Android device. This could mean a change in modus operandi, but after a 20-years' exposure to the dreaded 'Windows' virus I am perforce more at home in that environment; indeed, there are times  when a sort of Stockholm Syndrome starts to take over and I find myself wishing for the Bad Old Days.  Possibly I will in due course be blogging away happily on my new tabletty thing, but first things first; I must learn to walk before I run [off at the mouth?]

I have mixed feelings about the FOGgies – recognition of distinguished contributions to the corpus of bad writing. Apart from the seasonal misfire [well it made sense at the time, but a correspondent soon put me right see the Update], there were four posts. The first gave two awards:


Most Meaningless String of Abstract Nouns

The second gave only one, going to town rather on the award for


Most Misleading Use of Headlines


The third gave another two awards, for


Most Unnecessary Use of Management Jargon


special 'Clusterbomb' award for a family of inter-related euphemisms


The fourth gave one:


The FOGgy for Hasty Sub-editing (or 'Can they really have meant to write that?)


There would have been more, but as I  said in that last post (which sounds appropriately final, in a bugle-y sort of way)  'Waves of apathy for the FOGgies – reflected in the Blogger statistics – have persuaded me ... to put an end to the FOGgies'.

They may be back next year, but with more planning.

<digression theme="Man proposes, Blogger disposes">
This was my planned text:


Attentive readers may have noticed that hitherto each Harmless Drudgery post has had a footer that points to my TESconnect resources and Amazon links, and that the statistics given in this footer are time-specific. I update them from time to time, but some of the older posts have footers that are well past their sell-by date.

From now on, the 'footer' information will be on a separate page.

But things aren't working as I expected them to, and I have things to do before the end of the year. So you'll have to make do with the same old same old.
</digression>

A happy New Year to  all our readers (a growing number, averaging about 35 visits a day). Here's an interesting graph, showing  fairly steady, if not meteoric growth (as I said recently, meteors fall anyway). I'm not sure what happened in the year to September, but otherwise the trend is in the right direction. 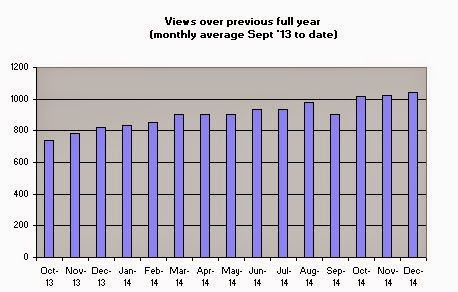 PS – A few clues to be going on with:

Confused stab in the dark – not for them! (4)
Whinge and throw fish back with space for grasping motto. (5, 4)
Marooned sailor finds shell (7)

PPS  – A few clues to be going on with: And the answers: