Excuse the recent sparsity of blogging. I've been preparing for this concert and also hacking away at the word-face (assiduous followers may have caught my foray into the world of schmaltz as I‘m still on "-al".)

A few days ago I caught on Radio 4 Extra a reading of an Edith Nesbit ghost story:
The Ebony Frame (it was  a repeat of a recording made in 2012, so  not iPlayer-able; that link is to Google Books.) What caught my attention was this sentence:


Mildred and her mother kept the conversational pot boiling with a profusion of genteel commonplaces, and I bore it, as one can bear mild purgatories when one is in sight of heaven.

What particularly struck  me was the expression "keeping the conversational pot boiling". Grim Tales , the collection that includes The Ebony Frame, was published in 1893 (says  ISFDB) and Etymonline dates potboiler to 1864 in what it calls "the figurative  literary sense". So Edith Nesbit was expanding  the scope of an idiomatic (and quite recent) coining, and at the same time illuminating it. Etymonline glosses it as "The notion is of something one writes solely to put food on the table"  – the figurative pot is the one on the author's cooker. Well,  ye-e-s-s-s, but where – there – is the idea of "keeping something going"? (the something  in question being a commercial literary presence)? It wasn't until hearing that Nesbit usage  that I saw this image's richness.

The word potboiler has – not inappropriately – been a slow burner, as the Collins frequency graph shows: 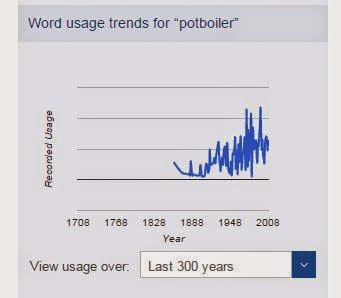 So much for pot boiling.

PS A quick clue to keep you going: Letting off about marching orders. (9)

And while we're on the subject of conversations, my ears pricked up earlier this week when I heard a reading from a book by Agatha Christie: it was a sentence something like 'They were dining tête-à-tête [I assume she would have used italics in those days] on the other side of the room.'  Now I know that tête-à-tête was originally, in French, a prepositional phrase, often used adjectivally, but that prepositional use in English struck me as rather dated. Onelook finds 18 (serious) dictionaries, some of which recognize this prepositional use, but the popular preference is summarized in this snippet:

This calls for further research – but not now. I  must do my Good Turn for the day.


(And I'm still thinking about that clue! I thought it was a good'un [though I says so as shouldn't] when I hatched it.)

Email ThisBlogThis!Share to TwitterShare to FacebookShare to Pinterest
Labels: autobiography, crossword clue, When Vowels Get Together - progress