As the tweet suggested, the headline 'finding' was hardly surprising. But I wanted to know just how it had been reached. So I had a look at the survey here.

Nearly seven out of 10 middle and high school students in South Korea are dissatisfied with English lessons at school because they are too focused on grammar, a study showed Wednesday. [Break for frankly pointless picture of SOMEONE'S HANDS IN THE ACT OF  WRITING SOMETHING] Based on a survey of 990 students attending middle and high schools in Seoul, the study showed 67.5 percent of them were discontented with the way English is taught at school.

My first impression [apart from 'Gosh – only two-thirds of  school kids don't like prescriptive rules; what a bunch of conformist drones'

] was that it could do with some images more eye-catching than the frankly pitiful ones supplied by the Korea Herald. So I knocked this one up without thinking too much [at first] about the message it conveys: 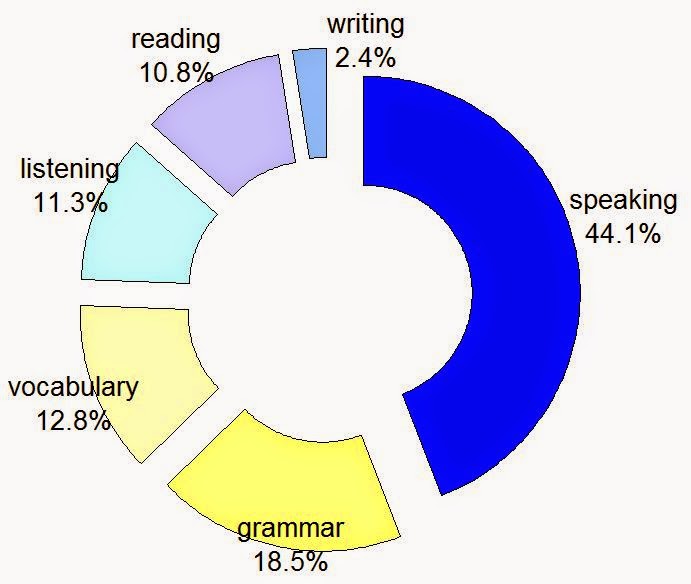 The first thing that leapt out of this picture was that the respondents (and, more importantly, the people asking the questions) saw only about two-thirds of language in terms of the four skills traditionally considered by language teachers – Speaking, Writing, Reading, and Listening (or, for lovers of mnemonics, SWhiRL). Personally, I can't conceive of teaching any of those skills without some vocabulary to start with, and without some way of choosing how to organize those words into meaning-bearing utterances (LS) or sentences (RW).

So it seems that this survey says more about pedagogy in S. Korea.  How do you learn vocabulary without any of the four productive/receptive skills? Presumably it is an entirely solitary and reflective process. And the same goes for grammar. How lucky I am not to have been exposed to that sort of regime.

DON'T TRY TO TEACH EITHER OF THOSE YELLOW THINGS

WITHOUT A SOLID GROUNDING IN

ONE OR MORE OF THE BLUE ONES.


You won't get anywhere and your students will quickly side with the malcontents.

But I don't see what else can be gleaned from the survey. There seems to be a great deal of confusion over what was being asked – what students liked, what they valued, what they saw as being valued by some other stakeholder (parents, teachers, examination authorities, potential employers...). The article doesn't say, and I suspect I'd have to learn Korean to read the original.