Brother Lawrence / in the scriptorium / with a quill

<gloss>
I'm trying to get this charming abbreviation for "yesterday evening" re-adopted. 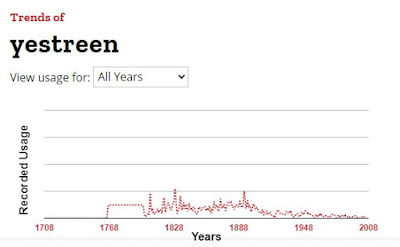 According to Collins it's Scottish and pretty rare But their "usage trends" graph shows that (back in the nineteenth century) it was all the rage.
</gloss> 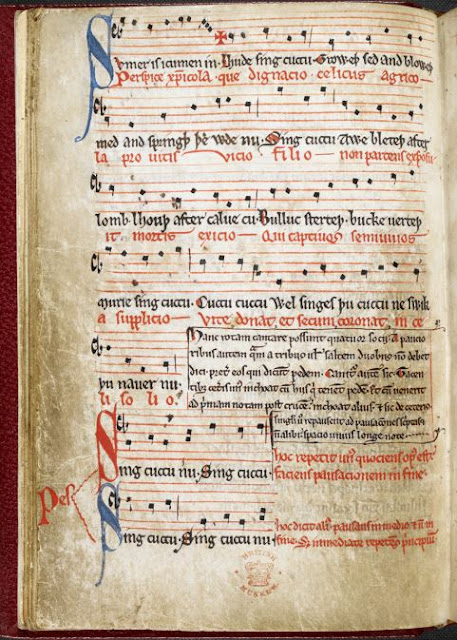 In  The Stories of English David Crystal says


Reading Abbey did not have a scriptorium, so the manuscript was probably copied at Oxford.

This gives the rota or "round" a double relevance to our choir, as a good few of us live in the Reading area, and both our MD and our accompanist studied at Oxford.

But why Sumer? Isn't it the wrong bird? The cuckoo arrives in Britain in April. Crystal gives the answer:


There was no contradiction, because in Middle English sumer was the only word available to describe the period between the vernal and autumnal equinoxes. The word spring to refer to the season is not recorded in English until the mid-sixteenth century.

The Stories of English

<digression theme="pipe-dream" likelihood="0">
Penguin missed a trick (or more likely decided that the trick wasn't worth the outlay) with this book. It was written like a coffee-table book, with two or three sorts of text and standalone features, quite like Words: An Illustrated History of Western Language (which I had a small part in publishing – but a bigger part than I wanted [and that's a whole 'nother story] ). But Penguin just squeezed it all together with tiny margins and no kind of visual clues to what sort of text was which.

<inline_ps date="2020">
"No sort of visual clue" is strictly a bit of an exaggeration. The designer has done what he or she could in the cost-reduced circumstances of what the trade knows (or knew in my day) as a "mass-market paperback". If you know what to look for it makes sense. There's a vertical rule down the margin of the standalone features; but it's easily missed, and the reader only realizes what's happened when the syntax of two unrelated sentence parts makes the inconsistency felt.
</inline_ps>

The reader's never sure whether the current text is part of the main argument or part of an illustrative aside. It needs changes in line-length or font or shade of paper to make it a smooth reading experience.

My fantasy – though I haven't discussed this with the good Professor – is to win a large amount of money and become a proper publisher. My Rights department would negotiate with Allen Lane to acquire the rights for a properly designed book, and my Design department would make this book CanDo Publishing's lead title.
<digression>

<tangent>
In researching this post I've come across my latest nomination for a Tezzy ("Time-wasting Site of the Year".  I haven't dabbled yet, but imagine the temptation will get the better of me in the end.  Here it is, the British Library's Medieval Manuscripts Blog
</tangent>

b
PS An irrelevant quandary:

My attention has been brought to this petition, and I'm in a quandary about signing it. I know I shouldn't be, as it obviously addresses a critical issue.


<parenthesis>
(My first choice of wording in that last sentence was "It clearly addresses", but while it does obviously address the issue, clarity is hardly characteristic of the way it goes about it. The "writer" has had a thought, taken a number of words in the relevant area, and spewed them out onto the page in the hope that the reader will organize them into something meaningful; with any luck, that meaning will match the meaning intended.

We write with ease to show our breeding
But easy writing's curs'd hard reading.

I want to subscribe to the gist without subscribing to the woeful wording. I do wish people would give some thought to what they're writing, rather than scatter-brainedly  conjuring up a bunch of more or less relevant words and leaving it to the reader to arrange them into a thought. How's this for a doozie?


It is important to learn about Black History and unteach this ignorance as some children may not choose to educate themselves and just listen to the people around them and be influenced causing people to hold racist views and pass them down many generations meaning the cycle of racism and systematic oppression will never end.

Fifty-five words with no punctuation. and daisy-chain syntax. The people the petition is addressed to are almost guaranteed to dismiss it as intemperate ravings.

I guess I'll sign, but with a heavy heart.