In a trail for an Eartha Kitt program  I heard once there was a song that I had never heard in the original (although C'est si bon ...

<parenthesis>
(one of those "translations" that give up the effort of actually translating, and just throw in the odd snatch of the original – Volare is another example)
</parenthesis>

...is a commonplace on the lounge circuit in an English version):


<autobiographical-note>
Not in the intervening year, when we were consigned to the attention of an assistant, who –  much to our annoyance at the time – insisted that we learn and use the symbols of the IPA.  I was later to realize that – unless total immersion in the environment of the target language was possible  – IPA symbols were an almost essential ...


<parenthesis>
(and that "almost" is a craven sop to the sometimes vocal language teachers who are happy to pander to the needs of  students who can't use a decent [that is, mono-lingual] dictionary)
</parenthesis>

...tool for learning a language.
</autobiographical-note>


...). The particular memory was of Cedric Baring-Gould's mime of walking arm in arm. My reaction was not a simplistic "Aha – bras dessus bras dessous is "the equivalent..."  (whatever that means in the context)  "....of the English" ...


<parenthesis>
(the assistant had introduced us to the less formal la main dans la main [in Françoise Hardy's "Tous les garçons et les filles de mon âge].. or "was to introduce" – all these parentheses are a bit too involved even for me...
</parenthesis>

My association of that phrase with that mime is an example of the sort of association summed up on the right hand side of this diagram I later (much later) used in a Portuguese lesson: 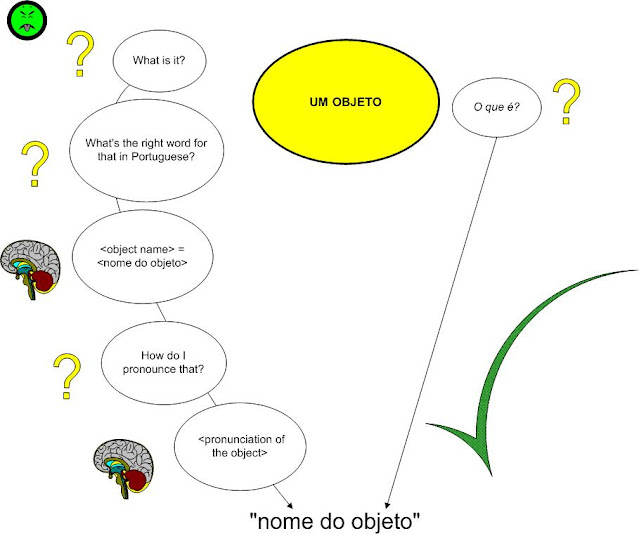 I've probably uploaded this to TESconnect, but here it is anyway; and if you want to change the target language, you're welcome to the Visio sources (Microsoft-backup-willing)

The question O que é? triggers the name of the object, without recourse to the arduous and time-consuming and unnatural and error-prone left-hand route.


My memory was of the mime performed by my French master 50-odd years ago. I've mentioned Cedric before, here. I can imagine his shade smiling down with a look of smug satisfaction (like the one he used to show the difference between 'No vacancies' and 'Complet' [HD 2020: arms  folded for the latter, hands upraised for the former]).

At this time of year [HD 2020: I was writing about the time of the rentrée des classes], teachers of all kinds may need the fillip of this post: if you're good, what you do (probably more than what you say) will let your pupils take away from your lessons much more than you think.

I'll never forget BG's figure hunched over the enormous reel-to-reel Grundig that he always carried from class to class. (The assistant had one of the new cassette players, but BG swore by his magnétophone .)

Time for my walk, if I can get this published before Minusnet ("better than damp string")  crashes again.