(a tribute to Google, which helpfully suggested that I might have mis-typed, or to  use my own coining, committed a stenoglurch.)

Remember Consignia (a short-lived attempted rebranding for  grouping together all the one-off brands that used to form part of the "GPO")? As  the BBC put it at the time, under the headline Consignia: Nine letters that spelled fiasco :


A duffer. A howling waste of money.

The most ruinous decision since the biblical scam that saw Esau swap his birthright for a bowl of stew.


This was not the only company in the early noughties that went in for a fancy foreign-looking ...


<apologia>
(not that I have anything against foreignness  – indeed, whenever someone starts a sentence with "So" and a pause, I experience one blissful moment of hope that they will continue "is  the French for bucket"}
</apologia> 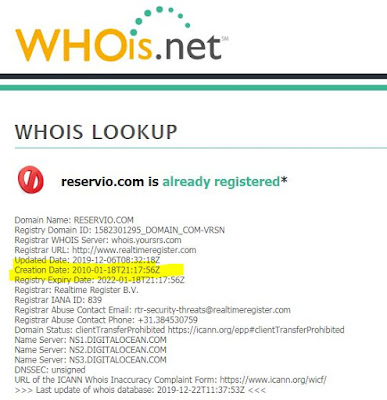 ...word that ended with a diphthong. Our local tip (or to give it its more woke name domestic refuse recycling facility) has instituted a system of reservations – called "Reservio". At first I thought this must be a child of the fancy of some Veolia (they're the recyclers) executive with no sense of the ridiculous.

But Reservio, it turns out, is another of those noughties coinings  (or very nearly – the website was registered in   2010, so there must have been a series of meetings in 2009 when the creation of this chimera was mooted.)

Meanwhile, back at the Stephen Spender  Prize, which I suppose is nearly an annual tradition (since I entered last year too) I've been thinking about the relative fortunes of complacent and complaisant – apropos of nothing much (except that one of them cropped up in what I was doing). They don't necessarily mean the same (though there's a good deal of potential overlap, and Collins goes so far as to say that they used to be synonymous in British English and still can be in American English.

They differ, when spoken, in only the voicing of the /s/|/z/ phoneme, which (what linguists call "homonymic clash" and ordinary people call "pun") usually in the development of languages leads to the ousting of one (somewhere in this blog I've cited the case of "let" as in the legal  jargon "let or hindrance" and the tennis player's "let" – both meaning something like obstacle).


<rant fierceness="a million suns">
(and the commentator who insists on saying "let-cord", suggesting that it's something to do with the net-cord, rather than just SOMETHING GOT IN THE WAY. As a matter of fact, it usually is the net-cord that gets in the way, but it could be a pregnant albatross or a drone, anything. And not only a thing. It could be a flash of lightning. They'd still play a let.

When this bloke (I think it's only one) says "let-cord" it  makes  me want to... count to ten and think of my Happy Place, because otherwise I might have a seizure).
</rant>

When the Great Vowel Shift made the impeding sort of "let" and the allowing sort of "let" uncomfortable bedfellows, one of them had to go; so now "let" almost always means "allow" (except for fossils like the ones I've mentioned, on passports, say – even on the red-covered pre-Brexit ones).

Call me old-fashioned, but I'm not a fan of unattributed citations, so I went to Collins again (whose trend charts are at least attributable, even though they stop short 2 years shorter, and don't give quite so clear a picture of the reciprocal fortunes (if I was more of a geek I'd overlay these 2 curves; I'll have to leave that to your imagination.)

The Collins charts are:

Time I continued with the Great Garden Furniture Refurbishment. There's just time for one more item of Translation news. In the John Dryden Translation Competition my entry (mentioned in an autobiographical note in this post) made the Long List (but got no further). Top quartile but no cigar, as they say. Oh well, onwards and upwards.