State of the onion

From time to time (more often in the heady days of Harmless Drudgery's youth) I take stock....

'So shaken as we are, so wan with care' as Henry IV Part One put it 'Find we a time with frighted peace to pant'. Well, not 'frighted peace', exactly, whatever that is...


<translation type="informal">
I think what he meant by 'find we a time...to pant' was 'Let's have a bit of a breather'.
</translation>

Anyway, the blog is not maintaining that 200+ hits a day level (1000+ in 5 days), but the present performance is not too shabby (nearly 80 a day this month – a good deal healthier than I reported here


At the end of last year I referred to a growing following, then reaching an average of 35 daily visits. Well 35 schmirty-five. This has been a record month (an average of over 55 visits per day)

back in the pre-referendum era):

<autobiographical_note>
That 2015 post has called to mind  a song I wrote in the style of Peter Starstedt (he of Where Do You Go To (My Lovely)?  [and little else] fame), which underlines the mistake perpetrated in a review I read in The Times a good few months ago (needs citation, as they say in Wikipedia,  but the object of the review was probably this). It was a review of a biography of Paul Simon, which said that Simon's experience of singing to uninterested audiences in Greenwich Village explained the words 'people writing songs that voices never shared'. I'm not sure whether it was the reviewer or the author who came up with this nonsense, but it was (nonsense, that  is). If the words  had been 'people writing songs that nobody ever listened to, the rotten swine' then maybe the writer's observation would've been less banal, less simplistic, less platitudinous.

It's fairly obvious to me (and to anyone else who has written a song that nobody else ever sang – or  even heard) that Paul Simon was referring to precisely that sort of splendid isolation – people writing songs that were never heard outside the song-writers bedroom.

But it's time for my constitutional.

Further evidence of a link between lockdown and blog-readership; (daily figures courtesy of Blogger): 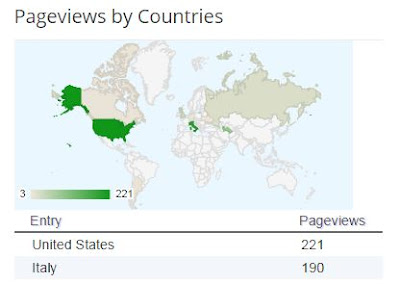