Love in the time of corona


The big news today is that Mr T, the Neanderthal sporter of bling, is treading on peoples' toes Big Time. Trump's edit of his notes for this speech was reported in the Washington Post, with this photo of his notes: 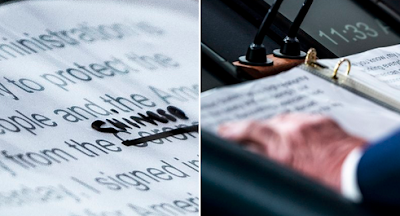 His defence of this deliberate rabble-rousing was disingenuous and plumbed new depths of insensitivity. The World Health Organization's feelings  were made abundantly clear in this tweet: 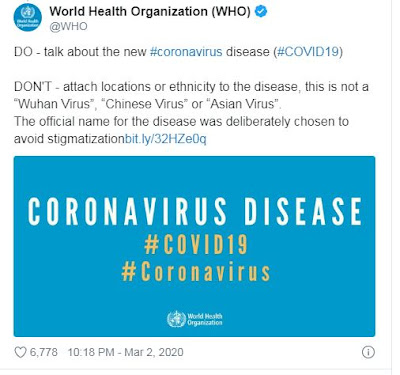 I write abundantly not because I'm particularly partial to the cliché (if something is going to be clear in any way, the odds are strongly in favour of abundantly ...

Search for *ly clear in this corpus. abundantly is second only to perfectly.

Meanwhile, in this much smaller corpus, dedicated to British English, both  perfectly and

abundantly are deposed by a brand new number one – absolutely (which clings on to fifth place in COCA). "Go figure", as I gather they say in contemporary American. (In my teaching days I'd've called "abundantly clear"  a strong collocation).
</COCA_NUMBERS>


...as the adverb of choice) but because it has long been the WHO's position on the naming of viruses. Generally, it's unfair (and misleading) to name a virus after a place. The pandemic known commonly as Spanish flu came from everywhere but Spain (Africa, USA, France):


In August 1918, a more virulent strain appeared simultaneously in Brest, France; in Freetown, Sierra Leone; and in the U.S. in Boston, Massachusetts. The Spanish flu also spread through Ireland, carried there by returning Irish soldiers. The Allies of World War I came to call it the Spanish flu, primarily because the pandemic received greater press attention after it moved from France to Spain in November 1918. Spain was not involved in the war and had not imposed wartime censorship.


It was an accident of non-alignment. Cases in Spain only got reported because they could be.  If only they'd had wartime censorship Spain might have avoided that stigma.

But is place relevant in the case of the Coronavirus? Tom Standage, in Go Figure reported (with no source, but quite plausibly) that a majority (6 in 10) of infections that affect humans started life in other species. (Wikipedia has an article on cross species transmission, which may well point to a source if you want to trawl though it.)

And an obvious source of cross species transmission is wet markets – where all manner of animals are thrown together  in painfully cramped conditions (a crate of chickens,  say,  piled next to a crate of piglets). Such markets aren't peculiar to China, though I suspect most take place in south-east Asia; with a fair few in South America and Africa – and chiefly in the developing world. Articles calling for such markets to be banned or suppressed in some way (like this one or this) are becoming more strident.

"But you can't ban them – they're part of our culture" cry the users. Well bad things need to be banned. And stigmatizing them is a good way of ensuring their demise. If it's a question of  weighing the health of billions of people (and, coincidentally, that of the world economy) against the way of life of a few million, I know where my money is.

Though I hate to appear to side with Mr T, I don't mind the virus being given a name that stigmatizes its source; not geographical, though. The "wet market  virus", perhaps.

But it's a lovely day. I shouldn't be cooped up in here...