Shortly after its first performance in Prague in 1880, Dvořák's Stabat Mater was performed several times in the UK, starting with a performance at the Royal Albert Hall in 1883.


Dvořák's Stabat Mater (1880) was performed and very well received at the Royal Albert Hall in London on 10 March 1883, conducted by Joseph Barnby.[2] The success "sparked off a whole series of performances in England and the United States", a year ahead of appreciation in Germany and Austria.[2] Dvořák was invited to visit Britain where he appeared to great acclaim in 1884.

Dvořák‘s tour was twice as long ago as the origin of Wokingham Choral Society. Precise records haven't survived – "Autumn 1951" is as close as it gets.

... it was performed at Worcester, and this title page of the score was signed by members of the orchestra and by Antonin Dvořák (signing himself "Ant."):


As a fellow member of my choir said 'Where has this piece been hiding for the last 40 years?' 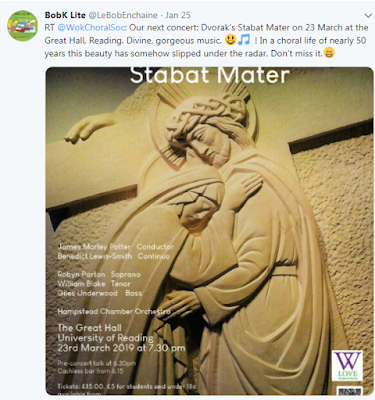 I borrowed this observation, and added a few years to the claim - though in all honesty I should admit that although my experience of singing in an SATB choir started in the early 1970s it has not been continuous.

The piece really is extraordinarily tuneful. Don't miss it, or the (free, to ticket-holders) introductory talk.:-)


I think I've already mentioned (somewhere in this blog) Vulgar Latin's preference for first and second declensions over the less regular third, fourth, and fifth; less to remember – and we are often dealing with Latin for speakers of  a Second or Other Language (LSOL?)

And that preference for regularity extended to  the choice of verbs made by those early speakers of LSOL – not only the choices, but the modifications they made (taking an irregular verb and changing the ending to make it behave like a regular one). This happened to the verb that means give: the irregular

became, in some parts of the Roman Empire, the regular

So give in current Spanish is dar, but in current French it is donner.

The last words of Stabat Mater,  a Christian Hymn that dates back to the 13th century,  are
Not only florid, but also fanciful, particularly in the third line. The soul (not necessarily mine) does not do anything; it doesn't praise anything. It is the recipient of something; and to mark it as a recipient it has the dative ...

<digression>
(a word that, incidentally, derives from the irregular sort of "give" verb)
</digression>

... ending -ae (in THIS case). The prayer is that the soul may be given the glory of paradise. And the word donaret derives from the regularized form of the word.

PPPS
The double nn and -er ending of the French example I gave in the first update may give some readers pause. The history of French phonology and orthography are a mystery to me (for reasons I've explained before – basically a lazy choice of study options on my part)...


<rant flame intensity="the heat of a thousand Suns">
I can't use that expression without flashbacks of the horror I (not infrequently) feel when people use "on my behalf" as though it  meant the same.
</rant>

So perhaps another example would be more illuminating. The word donation is also probably derived* (ultimately; via the Old French donacion) from the regularized DONARE. I say "probably" because although there is no hint of an n in any part of do, dare, dedi, datum, there is an obvious direct line from DONATIONE(M) (I've explained this typographical convention before; a classical Latinist would be content to say donatio, -onis).

*On further reflection it seems to me that this word is not le mot juste. My mistake was to think in terms of one word directly influencing a new word. But what really happens is a systemic pressure for change to words in a particular  field. Given DONATIONE(M) a new system of words was formed, centred on DONARE.