I don't have a PhD, nor am I a Postdoctoral Research Fellow at the Saltzman Institute of War and Peace Studies at Columbia University. But I know a self-important windbag when I see one. Richard Hanania brings all those attributes to the party in his article

The gist of his beef (if that's not too sinewy a metaphor) is:


Until now, conservatives have had to rely on anecdotes to make their case. To see whether there is an empirical basis for such claims, I decided to look into the issue of Twitter bias by putting together a database of prominent, politically active users who are known to have been temporarily or permanently suspended from the platform.

He continues  with a description of the massive database he has used to put flesh on the whinging bones of neo-con "argument" :


My results make it difficult to take claims of political neutrality seriously. Of 22 prominent, politically active individuals who are known to have been suspended since 2005 and who expressed a preference in the 2016 U.S. presidential election, 21 supported Donald Trump.

"My results", he says – pretty impressive. As I write, his piece has attracted more than 140 comments, mostly unreadable and full of references to a mixture of acronyms and slang that frankly isn't worth the bother of decrypting. But there is the occasional nugget, like


...And the statistical analysis? Unless we know the proportion of liberals versus conservatives versus apoliticals in the base population from which the 22 cases were drawn, the analysis is meaningless. Maybe conservatives are more likely to use Twitter? That could account for some or all of the bias. How would we even know what the political composition of the base population looks like?


And even in the unlikely circumstance that the base population has exactly equal numbers of liberals and conservatives, using 5% as the significance level versus 1% requires further justification, as does the use of what is apparently a ‘one-tailed’ analysis [the author is vague on this point].

As I said at the outset, I have no statistical expertise. But I think I can detect here a statistician  who doesn't buy the "analysis".

But this comment provoked a huge backlash, which the author "Jack B. Nimble" (wish I'd thought of that) batted away with arguments  such as


Do Twitter users skew liberal? Your linked data are from 2012! I can suggest two reasons why old data are unreliable:
and
Are Twitter users in 2019 more likely to be liberal than the base population of average citizens? I don’t know and you don’t know.

And in unrelated news, I was reminded recently of a post that I wrote a  few years ago, when the government were renewing their relentless attacks on the young (this was before they wasted 2½ years arguing the toss about Brexit and doing little else). Their latest wheeze at the time was to restrict Housing Benefit so that the little blighters could stay at home until they were 21.

This was the latest in a series of reforms (that's politician-speak for retrograde step) that started much earlier:


If I had my time again I'd be feeling extremely paranoid. The pressure starts being heaped on at primary school, where – as I mentioned last time – not only are the hoops you have to jump through getting smaller and higher, they are held by fools (or lions led by donkeys: look at the comments to that David Crystal blog I cited, and you'll see a good and conscientious teacher being forced into the goons' short-sighted bidding by an inflexible marking scheme).

Then there's secondary school, where the hoops are not only smaller and higher, now they're ringed with flame. Where Victorian schools had notices saying Boys and Girls, they should now say

(commonly mis-translated as 'Abandon hope all ye who enter here'. It's 'all hope'.)

And when the kids get through the hoops anyway, there's the ritual annual decrying of standards.

'More of them should be failing' snarl the hounds of hell (oh yes, I'm still working on the Dante theme).

I went on to talk about the woeful imposition (and raising "until the pips squeak") of tuition fees. Generally, my feelings about the way young people were being screwed over were not optimistic.


We're filling the streets with angry young men. And somehow I don't think it's just a revolution in theatre we're fomenting. Today's Jimmy [HD 2019: Jimmy Porter] is armed not just with an ironing board but with the power of the Internet.

But the streets are being filled by angry young men and women armed with nothing more threatening than disgust at the mess adults have made of the world, chanting 'This is what democracy Looks Like': 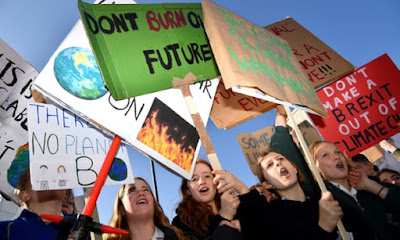 There's hope for the planet yet, if these good people have  anything to do with it. The comparison between these children's righteous anger and the feeding frenzy of bile accompanying Dr Hanania's whinging is heartening.