The ha'p'orth of tar in this case was the cost of a plane ride from Nantes, to Cardiff. On board was Cardiff's new signing, the young Emiliano Sala. 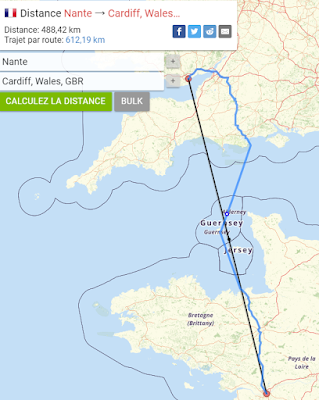 You can probably guess where I'm going with this.


Flying alone across the Atlantic Ocean in a tiny, single-engine plane at low altitudes, sometimes in extreme weather conditions, is not for the faint-hearted. Things can and do go wrong.

This is not news. In 1931 Antoine de St-Exupéry published Vol de Nuit, based on his experiences extending  the Aéropostale route from Dakar over the Atlantic to Natal, then South past Buenos Aires and then along the coast of Patagonia to Punto Arenas. If anyone knew about night flying over the Atlantic in light aircraft it was St-Exupéry  (who took his expertise to an early and watery possibly suicidal...


<ducking_and_covering>
Speculation is still going on, more than 70 years after the event; some people think they know but others aren't so sure. It happened during what he knew was to be his final sortie (as a result of demobilization rather than death). It seems possible that he picked a fight against impossible odds out of a sense of invulnerability. His commander regrets not grounding him.
</ducking_and_covering>

The editor of the Heinemann edition of Vol de Nuit writes of the reasons for extending the Aéropostale service to South America:


The air transport companies, through being grounded at night, were  losing most of the advantage over other methods of transport which they gained by day.

That is, there was money to be had by taking risks involving night flying.  You can probably guess where I'm going with this.

In a World Service interview on Tuesday evening [about 33'30" into that programme] Alastair Rosenstein, an experienced pilot and now an aviation consultant, says


...[l]et's say they were crossing at 10,000 feet [he has already mentioned a report that they were much-lower; and they had requested air traffic control at Guernsey to drop further still] , it would give them about 15 minutes of gliding time. It narrows the risk period that they are unable to reach land, and at this time of year you absolutely have to reach land in a single-engined aircraft...

I used to cross the Channel myself in light aircraft and I'd always choose the Dover-Calais route, because it's only 20 miles and if you go high enough there's a very very short time period right in the centre of the Channel where you wouldn't be able to reach land. But at night, low level, over the Channel, it's not advisable.


If in  an hour and a half you have no news  from me I don't know if they are going to send someone to look for me; because they cannot find me. But you know...Dad*, how scared am I.

Whatever turns out to have been the reason for this sorry tale, regardless of the air-worthiness of the aircraft (which that voice message calls into question) or the suitability of the pilot, or questions about licensing, or who paid for the flight, it's obvious that money comes into it somewhere. Spoilt ships and ha'p'orths of tar spring to mind. After lashing out a mind-boggling transfer fee, a Euro or two more spent on a reliable aircraft/route would have been a wise investment.

Radix malorum est cupiditas, as Chaucer's Pardoner used to say; the love of money is the root of all evil. Here endeth today's lesson.

* At first I lazily accepted the "translation" provided by Facebook. (In all honesty I thought Dad was pretty improbable, but the subtitle lasted longer than the recording, so I couldn't check.)  I  think, in the circumstances, he‘s  more likely to have said Mi Padre (that is, God); in fact  I once knew an Argentine student who habitually invoked the deity in Italian. If this practice is common in Argentina  it could  have been Padre Mio. The translation would still be God, but as I said the recording is cut off.

A  week later, the crash site has been found: here are the BBC's and Global News's reports. David Mearns, leader of a privately-funded search for the aircraft, said he found it on Sunday. The BBC report says:


Speaking on Radio 4's Today programme on Monday, Mr Mearns said: "We located the wreckage of the plane on the seabed at a depth of about 63m within the first couple of hours [of searching]."

He said the plane was identified by sonar, before a submersible with cameras was sent underwater and was able to confirm it was the plane.