The law of accumulating returns

Agonists and antagonists – things have an evil anti-thing;

This site explains "the expanding sphere of radio signals traveling outward from the earth":


As depicted in the beginning of the movie ‘Contact’, the earth has an expanding ‘bubble’ of man-made radio signals expanding outward at the speed of light. The first of these early radio transmissions were short range experiments that used simple clicks and interrupts to show transmission of information in the 1890s. In 1900, Reginald Fessenden made the first — though incredibly weak — voice transmission over the airwaves. The next year saw a step up in power as Guglielmo Marconi made the first ever transatlantic radio broadcast.

This means that at 110 light-years away from earth — the edge of a radio ‘sphere’ which contains many star systems — our very first radio broadcasts are beginning to arrive. At 74 light-years away, television signals are being introduced. Star systems at a distance of 50 light-years are now entering the ‘Twilight Zone’.

But hold on to that Twilight.  "Rage against the dimming of the light" – the Lichterdãmmerung. That site goes on:


As radio signals leave earth, they propagate out in a wave form. Just like dropping a stone in a lake, the waves diffuse or “spread out” over distance thanks to the exponentially larger area they must encompass. The area can be calculated by multiplying length times width which is why we measure it in square units – square centimeters, square miles, etc. This means that the further away from the source, the more square units of area a signal has to ‘illuminate’. 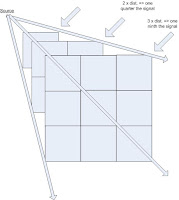 Because of this inverse square law, all of our terrestrial radio signals become indistinguishable from background noise at around a few light-years from earth.

Of course, the Inverse Square Law works in both directions The Cosmic Microwave Background radiation didn't start life as, say, I Love Lucy, but by the time it reaches us it doesn't have a very high signal-to-noise ratio; my guess is that it's 0, as near as dammit.


... the CMB was first found by accident. In 1965, two researchers with Bell Telephone Laboratories (Arno Penzias and Robert Wilson) were creating a radio receiver, and were puzzled by the noise it was picking up. They soon realized the noise came uniformly from all over the sky. At the same time, a team at Princeton University (led by Robert Dicke) was trying to find the CMB. Dicke's team got wind of the Bell experiment and realized the CMB had been found.

Both teams quickly published papers in the Astrophysical Journal in 1965, with Penzias and Wilson talking about what they saw, and Dicke's team explaining what it means in the context of the universe. (Later, Penzias and Wilson both received the 1978 Nobel Prize in physics).

A year after the Nobel Prize was awarded, I also found something by accident, and it has a strangely metaphorical relevance (to signals being broadcast rather than those received).


<autobiographical_note>
I was on holiday in the Pelopponese,  in the then only slightly developed fishing village of Tolo. (For some reason Wikipedia says "in Katharevousa known as Tolon [Τολόν]" – as though that purifying semi-artificial language were unique in using case-endings.

The village is on a tiny coastal strip. There were no big hotels at the time, and the roof of the sea-front taverna I was staying in had views  in one direction of the Aegean and in the other of the range of mountains (or rather, hills –  but quite rugged ones) that constituted that Pelopponesian finger.

Early one morning, before even the squid-basher had started his daily tenderizing tattoo, I walked up the hill to try to make sense of Homer's "rosy-fingered dawn"; of course, in order to see the sunrise I had to get away from sea-level.

At the top of the hill I was indeed surprised, but in a bad way. Beyond the skyline (tourist-line, perhaps) was a tip – thousands of binbags and plastic bottles, the waste-matter of a few years' tourism (as tourism was a relatively new import at the time). I touched on this plastic time-bomb here.)

(I never did get to the bottom of that "rosy-fingered" thing.).
</autobiographical_note>

Like that careless and improvident excretion of rubbish out of sight. our growing sphere of spent radio signals is a sign of our disruptive presence. And if we are really to take nothing but photos, leave nothing but footprints we need to find a way of catching our radio-frequency detritus before it makes more of a mess. Perhaps Elon Musk could take a break from wantonly adding to space pollution (see where that roadster is here if you must) and turn his mind to the problem of making money somehow by clearing up after 20th and 21st century technology's messes.

PPS: The answers: NOVICE,, LONELINESS and BEESTING.
Posted by @BobKLite at 15:07