A participle is not a particle

Play. That‘s what it means:

Press this to make the thing play.

Press this to make the thing pause. 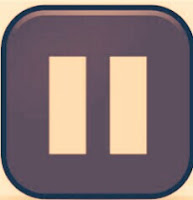 That's the way  it's been since the dawn of ti... technology (the 20th-century sort, that is: specifically, audio equipment). But globalization has undermined these comfortable certainties.

I have an MP3 player, characterized by the typical uselessness of its user "manual" (which is at least stapled together in the form of a book, better than the many self-styled "manuals" I've had to grapple with – often just a single sheet of A4). Like many bits of technical wizardry, it seems to have been generated by engineers who felt that their brainchild needed no written support.


<autobiographical_note>
Many an engineer thinks this, mutatis mutandis. I remember a conversation I had  with a Software Engineer more than 30 years ago, shortly after I started work with the Digital Equipment Corporation as a Technical Editor. He was trying to work out just what Technical Writers did (at the time I was at one remove from that, but if he could only get to grips with what Writers did he could then see what I did).  I  said things about making information clear and consistent and with repetition only when appropriate, and he raised an eyebrow and said "What, like the comments we put in our code?"

Self-documenting software has long been the Holy Grail of Software  Engineers, but the final and most insuperable obstacle is the ego of the creator:

My stuff is self-evidently Good.

But this MP3 player had more than the lack of documentation to overcome; and  it wasn't just the infelicity of  the  "translation". Its problem is incorporated into the GUI ...


<buzzword>
That's Graphic User Interface. Most of us see them  regularly on the screens of PCs, laptops, tablets, and smartphones. The engineer who designed it may well not have known he (she? – I wonder whether female engineers are as rare in China [that's where it's from] as they are in the West) was using one at all. But the device has functions, and controlling those functions involves manipulating icons. So there's a GUI.
</buzzword>

Which brings us to those particles (mentioned in my subject-line). Chinese has a funny way with verbs. It doesn't inflect  them. But it achieves a fully nuanced set of what I can only metaphorically describe as "verb forms" (more accurately, syntactical constructs that give context to verbal ideas). And one of the syntactical devices Chinese languages use is particles. So whereas most Western languages have participles, Chinese doesn't. Particle is a near-miss, orthographically, but unrelated.

So there's no one-word translation of Playing or of Paused – which, confusingly, are what those "universal" music-playing symbols mean on my MP3 player: the little right-pointing triangle means Playing (that is, the precise opposite* of Play), and the middle-less "H" means Paused (again, the precise opposite* of what it seems to promise). And it's specifically (usually, impossibly) a one-word translation that a user of a second language wants.

"One-word translation" – so often a mythical beast, but still believed in by so many.

The answers to those clues: VEGETARIAN ,  ATROPHY

Just when you thought this post was finished, I've noticed another misconstruing, in this player's GUI, of a participle. It has a function that lets you lock the dial; after you've done it (that is, when it's locked) the display shows a little locked padlock. Fair enough.  But the text tells a different story: LOCK, it says. Similarly, when you have unlocked it there's a picture of an opened padlock. Again, fair enough. But the caption says UNLOCK.
Posted by @BobKLite at 14:34