The other day my eye was caught by a BBC report:

Well GOLLY, I thought. A while ago More or Less dealt with a similar issue; in fact, the event was so Earth-shattering that Google will find it with the string Dyer Edward III.  1,560,000 hits. The Great Relatedness to Edward II Factoid leaves our Danny having to "take a moment" while the stupendousness (banality?) of the discovery sinks in. (Not quite banality – but what was extraordinary was not that he was a descendant: [after all, most people of English heritage are] but that his heritage could be documented.)

So when I heard about  the good woman of Basel's mummy I was underwhelmed. Huh, I scoffed, aren't we all descended from her? Well no; I had failed to consider the difference between the two cases: two or three centuries on the one hand, as opposed to  six or seven  – to give the Factors-of-2 magic its chance.

I was not the only sceptic. Stephen Fry tweeted: 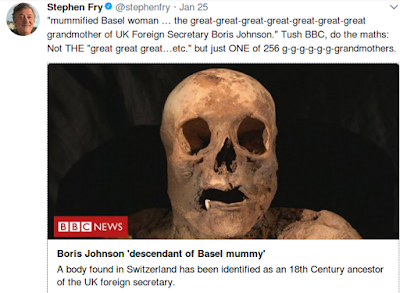 But his tweet was met by a flurry of corrections (rebuttwals?): GNEURR Mr Smartypants Fry <eye-roll>, haven't you heard of pedigree collapse? 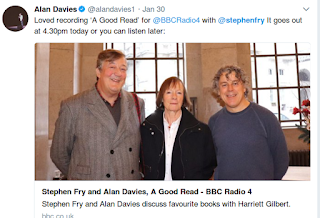 Nor had I. Fortunately, last week's More or Less explained (about 18 minutes in). Taking advantage, I guess, of  Stephen Fry's presence in Wogan House (or wherever) mentioned in this tweet...

... Tim Harford recorded a request from the genial polymath (from about 20'20") and went on to explain.

<digression>
This reminds me of the issue of pedigree's pedigree ... Hmm... [See PPS]
</digression>

But I'm missing this week's More or Less.

PPS  – As prefigured in my last digression., I've been looking into the derivation of pedigree. The version I was told 40+ years ago, and still favoured by many authorities (including the OED and Etymonline – but not having the wholesale  support of some current scholars ...

According to this derivation, the pun with degree (in the sense of descent) was a happy accident of Middle English.

To quote that OUPblog again


In 1895 Charles Sweet, the brother of the famous Henry Sweet, and Round put forward the same explanation: according to them, the mark used in old pedigrees had the shape of a so-called broad arrow, that is, a vertical short line and two curved ones radiating from a common center, like three toes of a crane’s foot, with an allusion to the branching out of the descendants from the paternal stock.

So the jury's still out.

What we do know is that English crane and French  grue are related. Etymonline's entry for crane says:

But what bothers me is this statememt from  the same entry:


Metaphoric use for "machine with a long arm" is first attested late 13c. (a sense also in equivalent words in German and Greek)...

And in French of course .  Scholars who question the crane's foot derivation of pedigree seem to be very concerned about the vowel: Isn't degree a more likely root for pedigree, preserving the /i:/ of degree? They seem to overlook the fact that the tongue positions for English /i:/ and French /y/ are very similar (if not identical –  many a language teacher uses this device for teaching /y/: Get ready to whistle and try to say /i:/); the main difference is in the lip-rounding.

OK, crane and grue are related. But if the first attested version of the lifting machine  dates from the 13th century, who thought of the metaphor first? Or is this a case of "convergent etymology".  Either an English builder thought


Pierre has named this machine after a bird that stands on one leg. That‘s a good idea. I‘ll do the same. Right, this hitherto unnamed device, which he calls une grue will henceforth be a crane.

Or a French builder thought

Well, no, that‘s silly. It‘s hard to imagine how people felt about language in the 13th century, when French, Latin, and English vied for... no, even that is an over-simplification. There was no "vying";  people just used whatever communication mode was suitable. And on a 13-century building site, with rulers setting impossible deadlines...

"But sire, there  are not enough stone-masons in all Anglia."

"Then get some from Francia. Two years I said.")
</Building_Times>

...the linguistic picture would have been very fluid.