The little things of life

I have mentioned diminutives before; and they're always lurking quite close to the surface when you think about words. In my last post, for example:

Spaghetti are little spaghi ["strings"]; cigarettes (and cigarillos) are little cigars. A scintilla is a little piece that's been cut off (from the irregular verb scindere [whose part participle is scissus, recognizable in the English scissors]). Often, their meanings diverge widely from the mother-word: a tabernacle – ultimately from tabernaculum – doesn't have much of an obvious link with a tavern (> taberna); the altar wine doesn't even go in  the tabernacle... 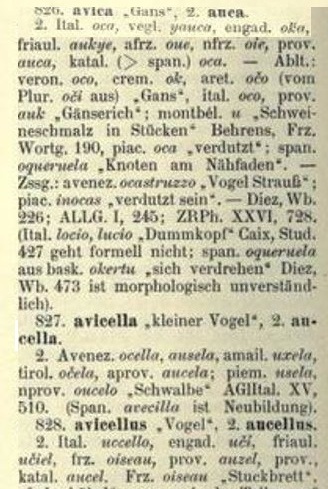 The reason for this focus (on diminutives) is a chance reading of the title of an Italian board game: Il gioco dell'oca.  In Italy (and much of the Romance world) they don't have Snakes & Ladders (although Google Translate says that Snakes & Ladders is an English "translation" of Gioco dell'oca.) Un' oca is thought to have derived from the Vulgar Latin *AUCA(M) (the preceding asterisk signifies that the word is not attested, but is the source of other Romance words that require it to have existed).

On the right is a rather mangled excerpt [cobbled together from the foot of one column and the top half of the next] from the Romance philologist‘s bible Romanisches etymologisches Wörterbuch. The book was compiled more than a century ago, when the centre of the philological universe was in Germany, (Grimm's Law, remember)  so it's not a light read. And it says so much about auca, avicella and avicellus that I missed out an elision after the first four lines on avicellus: Section 828 goes on, but my interest ran out after the French oiseau.


<tangent status="just thrown out there">
I wonder if Pooh's Woozle owes anything to A.A.Milne's knowledge of Chaucer's ousel... So little time, so many speculations.
</tangent>

Anyway, oca means "goose", and there are diminutives in its back-story. But when I first (knowingly, as I imagine I may have come across the word before I saw that Italian board-game) saw the word I wondered whether it might have any connection with the English word ocarina – this odd-looking musical instrument:

I went to my usual source for this sort of information, Etymonline:

My guess was right (though I'm not sure I buy the so-called for its shape. The instrument comes in all sorts  of shapes, but the most common one doesn't remind  me of a goose; perhaps the noise it makes comes into  it).

Returning to the game, its instructions were in Italian; and I suspect  – my command of Italian is more of a comma – they claimed a millennial origin for the game, though Wikipedia suggests that the author of this pooh-poohs the idea with a rather curt sniff:


[The games]...are unlikely to have been the same


When Shakespeare put this expression in the mouth of Mercutio (in the first recorded use), he was probably referring to a certain kind of horse-race, with a leading horse being followed by other riders in the V-shape typical of migrating geese. When used today, it refers more directly (although figuratively) to the notion of chasing after wild geese. (It seems to me that this change in meaning may have been influenced, in days when Latin was more widely studied, by an awareness of the fact that a mission to find the solution to a question that has no anser [=Latin, "goose"] was vain; but there is no documentary proof of this – which, I admit, smacks of folk-etymology.)

...what's sauce for the goose is sauce for the gander....[I'm not sure where that "good for the goose" in the UsingEnglish version comes from. Both BNC and COCA prefer sauce as a noun in that context {before "for the goose"}... Oh I get it. I was searching specifically for a noun . BNC prefers the noun, with only a single good; but COCA has much closer balance (indeed, an ABSOLUTE balance, in its corpus – alliteration trumps gastronomy )] Geese certainly get about. But things need doing. Further reflection on ocarinas and goslings will have to wait, sine die].

PPS: The answer: THE HAIR OF THE DOG