'You couldn't make it up' – said the John Waite in this week's Pick of the Week, introducing  a BBC report on a self-styled Grammar Vigilante. This masked crusader roams the streets of Bristol righting the wrongs done to Milady the Blessed and Inviolate Language of Our Forefathers the Way Mrs Thistlebotham Taught It. [Mrs Thislebotham was a stickler for proper English who inhabited Dave Barry's Mr Language Person columns, one of which observed that an apostrophe just meant Here comes an S.], The Apostrophizer's special interest was the wayward apostrophe, and the arcane/arbitrary rules governing its "correct" application. I wrote a  few years ago (here) about this:


... my late twentieth-century sightings of apostropho-clasm are far from original. GBS wrote

I have written aint, dont, havent, shant, shouldnt, and wont for twenty years with perfect impunity, using the apostrophe only when its omission would suggest another word: for example hell for he’ll. There is not the faintest reason for persisting in the ugly and silly trick of peppering pages with these uncouth bacilli. [ed, 2017: the source I originally gave had papering for peppering, but this is obviously wrong: peppering is the perfect choice, whereas papering makes no sense at all; I suspect the finger of blame points at Optical Character Recognition]

(Isn't that bacilli marvellous? Bacilli were in the news at the time, because of discoveries in connection with these stick-like [Latin baculum – 'little staff'; there's that '-ulus/m' again, denoting a diminutive, as noted in a previous post]  microscopic objects. Shaw was a contemporary of Fleming [HD 2017: I have no idea why I mentioned Fleming. The reason is probably a circumstantial link now lost on the cutting-room floor.] – who was born before Shaw but outlived him. One can imagine Shaw reading a newspaper or scientific leaflet illustrated with a slide covered with these things looking like chocolate vermicelli - and there's another metaphor, 'little worms', but that would be a digression too far). You can read more about apostrophes here [ed, 2017: this source is no longer there. Here's an option], if you're that way inclined. I really can't get awfully excited about this sort of thing. [HD 2017: I'd like to include a contemporary picture {mid-late 19th cent.} but for the time being you'll have to make do with this: 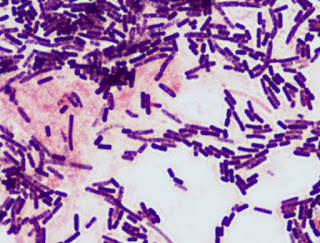 A better one is TBS, but breath retention is not advised.]

The Pedant column in The Times, responding to the BBC's story, layed into the Apostrophizer in a column entitled ...


<digression>
See rant here (the bit in red) if you're interested in my feelings about this wronged word.
</digression>

...The Apostrophiser should Apologize. I'm not convinced the writer came up with that title; maybe a sub-editor was just attracted by the assonance


For a start, the grammar vigilante has misunderstood his own moniker. Grammar encompasses syntax ...morphology ... and phonology .... Mr Vigilante is concerned instead with orthography, the conventions for writing a language, which has nothing to do with grammar.

The distinction matters. [HD: Well yes. I thought as much when I first heard the BBC report but dismissed it as a bit of typical dumbing down; and eternal vigilance in this sort of thing strikes me as almost as anal as the malefactor.] Whenever you hear a complaint about “bad grammar” levelled at a native speaker it will almost invariably be untrue. We know how the rules of grammar go (real rules, I mean, like word order or inflection for tense) and don’t get them wrong. But the conventions of spelling and punctuation have to be learnt. Mr Vigilante believes it’s a “crime” to get these wrong. [HD: Well, again, yes. The self-styled Apostrophizer was making a rhetorical rebuff of the interviewer's question (about the legality of his efforts), without weighing his words more carefully, so ...] What nonsense [... it was indeed pretty silly. He needs a PR training course. But his use of "It's a crime" to refer to something not strictly criminal is fairly standard hyperbole and hardly merits this put-down. Sledgehammers and nuts spring to mind.].

Though agreeing with a lot of what Oliver [Pedant] Kamm writes, I fear this article was not his finest hour. He talks about the history of orthography, giving loads of detail. I sympathize with his objection to being corrected by an ignoramus who thinks English should be pickled in aspic.

Incidentally, Kamm obviously knows but has over-simplified the story:


The apostrophe didn’t enter the English language till the 16th century. It was adopted from French as a printers’ convenience to denote an elision or contracted form. From that usage, [HD: Here's the missing bit, expanded below.]  it was adopted to denote singular possession and then plural possession. But this was no logical stepwise progression. The conventions fluctuated and they didn’t settle down in their current form till around 1800, with mechanised printing.

The printers' convention was applied, in a case of a possessive usage, to a missing letter or  letters that had been part of the possessive inflexion. Chaucer's Pardoner inveighs against the casual use of oaths such as

and the possessive ending is necessary for the metre. So those compositors weren't just inventing a convention for denoting possession, but using a trick used in other contexts (such as ñ for nn); it was just a convention for making the artisan's work easier. The apostrophe came to denote possession more-or-less by accident, by marking the elision of a possessive ending.

Anyway, I must start on the picnic bench in the gaps between rain showers and neighbours' bonfires.