Not for the first time, my Tai Chi class has set me off on what might politely be called a tangent (less politely another hare-brained reflection).


<digression theme="hare-brained">
Interesting metaphor, that; presumably not unrelated to the Mad Hatter: darting about, with random changes of direction. (They're not really boxing;  something to do with mating, I think. Wikipedia would know.)

<meta_digression>
And another thing. In Western culture we have the association of the moon with lunacy (which does what it says on the tin, as it were), but many Eastern cultures see  not a Man in the Moon  but a Rabbit in the Moon. I wonder... (For Further Study, as they used to say in the ISO world: "FFS" [meaning "interesting, but don't hold your breath"])
<meta_digression>

My teacher often teaches in mirror image, and refers to our bodies: 'Your right hand,' she says, demonstrating with her left. This is easy enough to understand, once you know the convention and have practised a few hundred times: the body just gets used to reproducing (or, at least, trying to reproduce) the movement demonstrated. But to a newcomer it‘s not so easy. What Wordsworth called our meddling intellect gets involved, willy-nilly.

This is reminiscent, I thought, of the Stroop Effect,


...a demonstration of interference in the reaction time of a task. When the name of a color (e.g., "blue", "green", or "red") is printed in a color that is not denoted by the name (e.g., the word "red" printed in blue ink instead of red ink), naming the color of the word takes longer and is more prone to errors than when the color of the ink matches the name of the color.

In short, red is easier to make sense of than green. Presumably, colour is processed in a different part of the brain than writing, and the translation of writing to meaning in yet another, and the translation of writing to sound in yet another. So there's a huge amount of processing going on here, and if two  of those domains overlap (the written glyphs' meaning and their cognitive content – R-E-D) the brain has life a bit easier.

This crossing of wires, the interference of the intellect with a motor skill, is often apparent to a language teacher. Many years ago, when I was teaching Portuguese to a group of adults (people who've been taught at school the stifling and confusing and just plain WRONG lesson that the way to solve a problem is to turn the intellect loose on it) I drew this diagram to show what I wanted them to do: 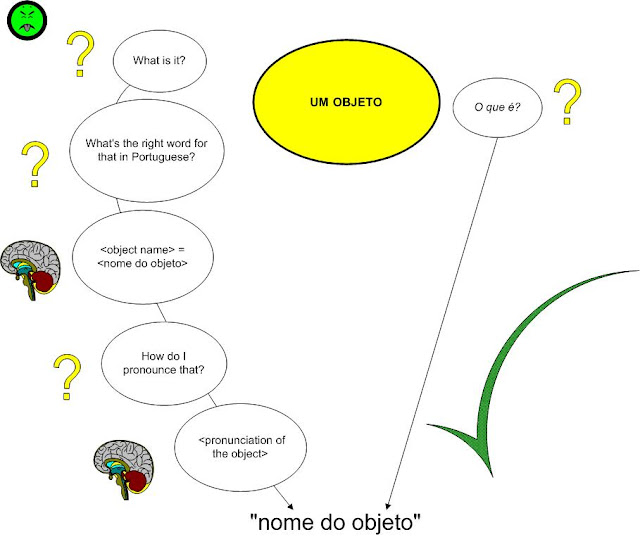 There are many more steps on the left-hand route, each being error-prone. So there's a Chinese Whispers effect, which means that there's next-to-no chance of the sound output of the two routes matching.

The same applies, mutatis mutandis, to other motor skills (and speaking is unquestionably a motor skill).


<digression theme="Underhill talk">
I missed a recent talk by Adrian Underhill, in which he talked about decognitvizing the teaching of pronunciation to ESOL students. I must catch up with the transcript. Watch this space.
</digression>

So a teacher has to beware of the interference of intellect. On the other hand, though, it's easy (and fashionable) to go too far in what has been called, in another context, the romanticization of ... illiteracy (that "..." represents the one word musical, which is what I meant by another context. See this letter  to the Guardian from many leading musical lights).